The top management team from the Ministry of Health is conducting support supervision in Lango sub region, with an aim of improving health service delivery.

The team was led by Dr Ruth Aceng the State Minister for health together with Dr Diana Atwine the Permanent secretary and Dr Henry Mwebesa Director General Health services among others.

According to Dr Mwebesa, the objectives of this visit are to assess health service delivery performance, meet the various technical and political leadership for performance review and assess the Covid-19 response as well as ensure community engagement and dialogue.

Dr Atwine noted that meetings with health workers are involved, together with other stakeholders in the sub region.

She emphasized the need for health workers to have Personal Protective Equipment while on duty so that they keep safe in case a patient is infected.

The Ministry of Health believes that in this way, urgent matters will be prioritized and maternal mortality will as well be prevented.

According to Emmanuel Ainebyoona, the Ministry of Health spokesperson said such support services and supervision will be done in all other referral hospitals as well, around the country.

The exercise will go on for the entire week. As of now, health centres including, Agur HC IV, Amoro HC III and Amach HC IV have been supported and inspected.

World Trade Organization: Could there be an African director-general?


Fighters from an alliance of rebel groups reportedly attack a police station in a new escalation after the military coup.

An alliance of ethnic armies in Myanmar that has opposed the general’s crackdown on anti-coup protests attacked a police station in the east on Saturday and killed at least 10 policemen, local media said.

The police station at Naungmon in Shan state was attacked early in the morning by fighters from an alliance that includes the Arakan Army, the Ta’ang National Liberation Army, and the Myanmar National Democratic Alliance Army, media reported.

Shan News said at least 10 policemen were killed, while the Shwe Phee Myay news outlet put the death toll at 14.

A spokesman for the military did not return calls asking for comment.

Al Jazeera’s Tony Cheng, reporting from neighbouring Thailand, noted the ethnic armies are some of the oldest in the world, having battled central government forces for decades.

“Since the coup, there has been a lot of talk about armed groups operating together but we have not actually seen it before. Today it’s claimed three acted together, joined forces, attacked this outpost manned by Myanmar police, killing a number of policemen,” said Cheng, adding the assault occurred over two hours early on Saturday.

More than 600 people have been killed by the military in the crackdown on protests against the February 1 coup, according to a monitoring group. As violence has escalated, about a dozen armed groups have condemned the coup-makers as illegitimate and pledged to stand with the protesters.

Civilian lawmakers, most of whom are in hiding after their removal, have announced plans to form a “national unity government” – with key roles for ethnic leaders – and are holding online talks about joint resistance to the generals.

Meanwhile, reports from Myanmar say dozens of people may have been killed in a military assault on anti-coup protesters in the city of Bago. About 60 people may have died in the clashes in the city, about 60km (32 miles) northeast of Yangon, according to Radio Free Asia citing witnesses.

News site Myanmar Now cited a protest leader as saying dozens of bodies had been brought inside a pagoda compound where the military was based. Witnesses cited by both media outlets reported hours of gunfire that started early on Friday.

Protests against the February coup continued on Saturday in Yangon, Mandalay, Bagan, Sagaing, Myeik and many other cities.

The military crackdown has also included reports of protesters being tortured in detention and harsh sentences.

The military issued death sentences on 19 people from Yangon’s North Okkalapa township on Friday. They were charged with beating an army captain, according to Radio Free Asia.

The military coup dismissed the elected government led by Aung San Suu Kyi, who is currently under house arrest. 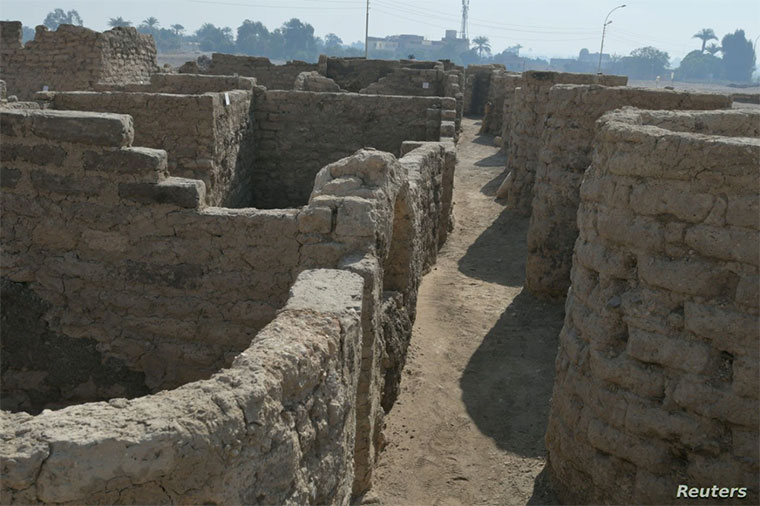 A new archaeological discovery is seen in Luxor, Egypt, in this undated handout photo. (Zahi Hawass Center for Egyptology and High Council of Antiquities Joint Mission/Handout via Reuters)

Noted archeologist Zahi Hawass said an Egyptian mission discovered the mortuary city in the southern province of Luxor. It dates back to what is considered a golden era of ancient Egypt, the period under King Amenhotep III of the 18th dynasty.

“Many foreign missions searched for this city and never found it,” Hawass said in a statement Thursday. The city, built on the western bank of the Nile River, was once the largest administrative and industrial settlement of the pharaonic empire, he added.

Last year, archeologists started excavating in the area, searching for the mortuary temple of King Tutankhamun. However, within weeks, the statement said, archeologists found mud bricks formations that eventually turned out to be a well-preserved large city. City walls, and even rooms filled with utensils used in daily life are said to be present.

“The archaeological layers have laid untouched for thousands of years, left by the ancient residents as if it were yesterday,” the press release said.

The newly unearthed city is located between the temple of King Rameses III and the colossi of Amenhotep III on the west bank of the Nile in Luxor. The city continued to be used by Amenhotep III’s grandson Tutankhamun, and then his successor King Ay.

Betsy Brian, professor of Egyptology at John Hopkins University, said the discovery of the lost city was the most important archeological find since the tomb of Tutankhamun.

King Tut became a household name and helped renew interest in ancient Egypt when his tomb in the Valley of the Kings was discovered nearly fully intact in 1922.


The defence ministry says soldiers were sentenced to death by a specialist court after a fair trial.

Saudi Arabia has executed three soldiers convicted of “high treason” and “cooperating with the enemy”, with a statement from the kingdom’s defence ministry saying the trio was sentenced to death by a specialist court after a fair trial.

The state-run Saudi Press Agency identified the men as soldiers working in the defence ministry. It did not elaborate on how the men aided the kingdom’s enemies.

The ministry did not name the “enemy” either but the executions on Saturday were carried out in the southern province bordering Yemen where Saudi Arabia has been at war for more than six years against the Iran-backed Houthi fighters.

Saudi Arabia has come under increasing global scrutiny over its human rights record since the murder of journalist Jamal Khashoggi in 2018 at the kingdom’s Istanbul consulate and the detention of women’s rights activists.

Rights groups, including Amnesty International, have called on Riyadh to stop the use of the death penalty, citing allegations of torture and unfair trials.

According to Amnesty figures, Saudi Arabia carried out the world’s third-highest number of executions in 2019.