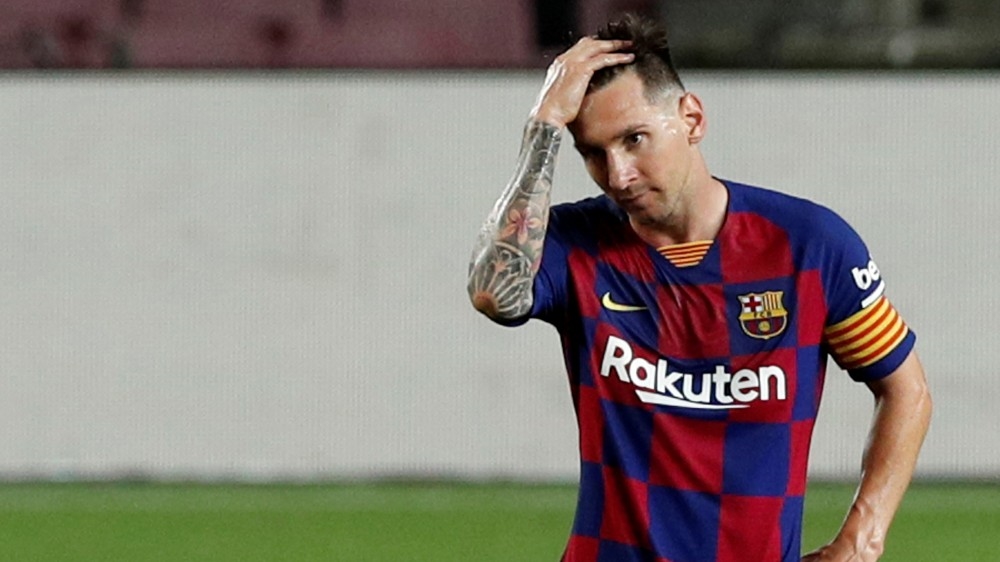 Captain Lionel Messi has told Barcelona he wishes to leave the club immediately, deepening the turmoil within the Catalan side less than two weeks after their humiliating 8-2 defeat by Bayern Munich in the Champions League.

Barcelona confirmed to The Associated Press news agency on Tuesday that Messi sent the club a document expressing his desire to leave.

Barcelona said it told Messi it wants him to stay and finish his career at the club. It hinted that a legal battle could be coming and said it will not automatically grant the Argentine great his wishes.

The dispute centres around a clause in Messi’s contract.

Under the terms of the contract, which expires in 2021, the only way Messi can leave without the club’s consent is if a rival side pays his release clause of 700 million euros ($828m).

The Argentine’s request to leave Barca comes a day after Spanish media reported that new coach Ronald Koeman told Messi’s close friend and strike partner, Luis Suarez, he does not wish the Uruguayan to stay at the club.

Barca are in the midst of overhauling their squad following the defeat by Bayern which condemned the club to a trophyless season for the first time in 12 years.

After the loss, Barcelona announced it would make “profound” changes to the first team and a “wide-ranging” restructuring of the club. The changes began with the firing of coach Quique Setien a few days after the defeat in Lisbon, and new presidential elections were called for March.

Messi, who has been named world player of the year a record six times, has grown increasingly unhappy in the last 12 months with how the club is being run under president Josep Maria Bartomeu.

If Messi is to leave @FCBarcelona by activating a release clause, then I hope the club try to help, not hinder him. He’s been fiercely loyal and their greatest ever player. It would be terribly sad if it finished with a fight between the player and the club.

In February, he lashed out at then-sporting director Eric Abidal on social media and a couple of months later turned his anger on the club hierarchy for the way in which players were forced to take a pay cut to cope with the financial hit of the coronavirus pandemic.

After Barca surrendered the La Liga title to Real Madrid in July, Messi slammed the team as being “weak” and “vulnerable” during an uncharacteristically fiery post-match interview.

Former Barca captain Carles Puyol backed Messi’s wish to leave the club by writing on Twitter: “Respect and admiration, Leo. You have all my support, friend.”

“Bartomeu and his board should quit immediately. They have undermined Messi to save them from the sporting and financial mess they have created. If they quit there might be some hope that Messi stays at Barca,” he tweeted.

Barcelona fans gathered outside the club’s headquarters on Tuesday as they expressed their support for the club’s legendary forward and demanded the resignation of Bartomeu.

“The situation has been uncomfortable for everybody. This board of directors should have resigned a long time ago. Bad results, bad management. Nothing positive about them. They are destroying the club,” said Oriol Aznar, 37-year-old office clerk. “It is normal that Messi wants to leave. They want to end the year with a decent financial balance by making money out of Messi leaving. But this is not the right way.”

They called Messi a fraud for not leaving his comfort zone in La Liga. Now that he wants to leave they’re calling him a coward. It’s always different rules for Messi and that’s why he’s the best

“I do not think he is thinking about money. He wants to go to a team where he can win,” said Nicolas Belles, 19-year-old student. “Cristiano Ronaldo and Messi are both filthy rich. They only want to win. After 10 or 12 years playing here, winning so many titles, what he really wants is to keep winning.”

Gaza’s MCA rapper: An 11-year-old’s message to the world | News