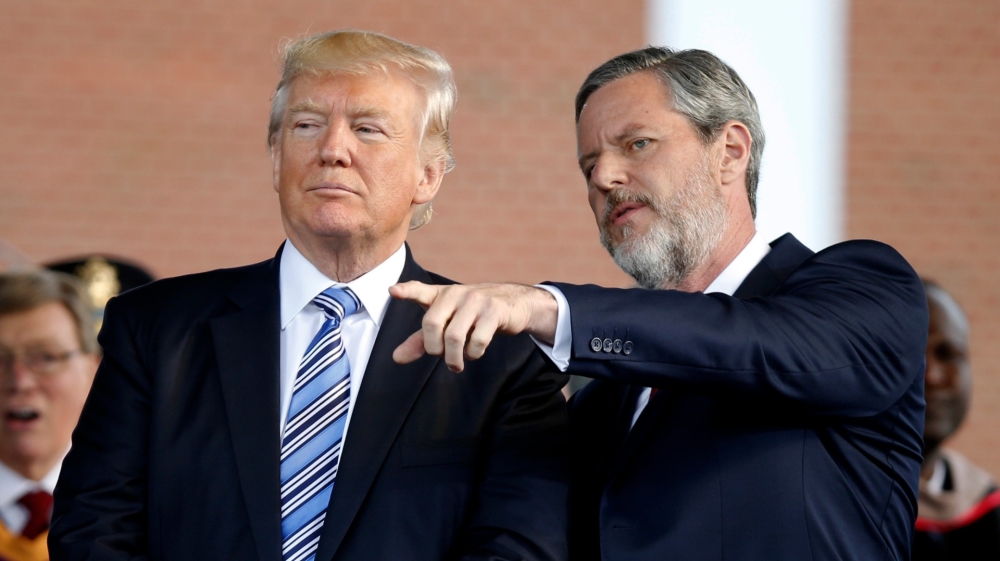 Jerry Falwell Jr, a leading US evangelical Christian whose endorsement played a key role in President Donald Trump’s 2016 victory, has resigned as president of Liberty University, the school has said.

Falwell’s exit marks a precipitous fall from power for one of the country’s most visible evangelical leaders and ardent supporters of Trump. The Lynchburg, Virginia university was founded by Falwell’s late father, the Reverend Jerry Falwell Sr.

Falwell, through a lawyer, sent a resignation letter late Monday to members of Liberty’s board, the school said in a statement.

The resignation follows a report in which Falwell’s business partner, Giancarlo Granda, alleged to Reuters News Agency that he had a year’s long sexual relationship with Falwell’s wife that included Falwell.

Granda said he was 20 when he met Jerry and Becki Falwell while working as a pool attendant at the Fontainebleau Miami Beach hotel in March 2012. Starting that month and continuing into 2018, Granda told Reuters that the relationship involved him having sex with Becki Falwell while Jerry Falwell looked on.

In previous statements, Falwell had said his wife and Granda had had an affair and Granda had been trying to extort money from the couple over the matter. Granda denied that allegation.

“That’s the only reason I resigned: because I don’t want something my wife did to harm the school I’ve spent my whole life building,” Falwell told the Associated Press news agency. “I never broke a single rule that applies to staff members at Liberty, which I was. So I want everybody to know that.”

Falwell started an indefinite leave of absence as president and chancellor of the school on August 7 amid intense criticism of the photo he posted on social media, which showed him exposing his stomach with his pants unzipped.

Critics of the image said it was evidence of hypocritical behaviour from the leader of a university where students must follow a strict code of conduct that includes modest dress and a ban on alcohol consumption and premarital sex.

The photo also prompted new pushback against Falwell from school alumni and supporters, including North Carolina Republican Representative Mark Walker, who called for his resignation.

The older Falwell had aspired to make Liberty University an academic and athletic leader for evangelicals in the vein of the University of Notre Dame, an academic bastion for Roman Catholics. The younger Falwell’s success in shoring up the school’s finances after he took over in 2007 following his father’s death bolstered his standing among the school’s board members.

But the revelations about Falwell may have little effect on Trump’s chances in 2020. He has repeatedly brushed off allegations that would have ended other political careers, while keeping the support of a die-hard base.

A June survey by the Pew Research Center showed that a strong majority of white evangelicals – some 72 percent of them – approved of his handling of the job, down modestly from 78 percent in April.