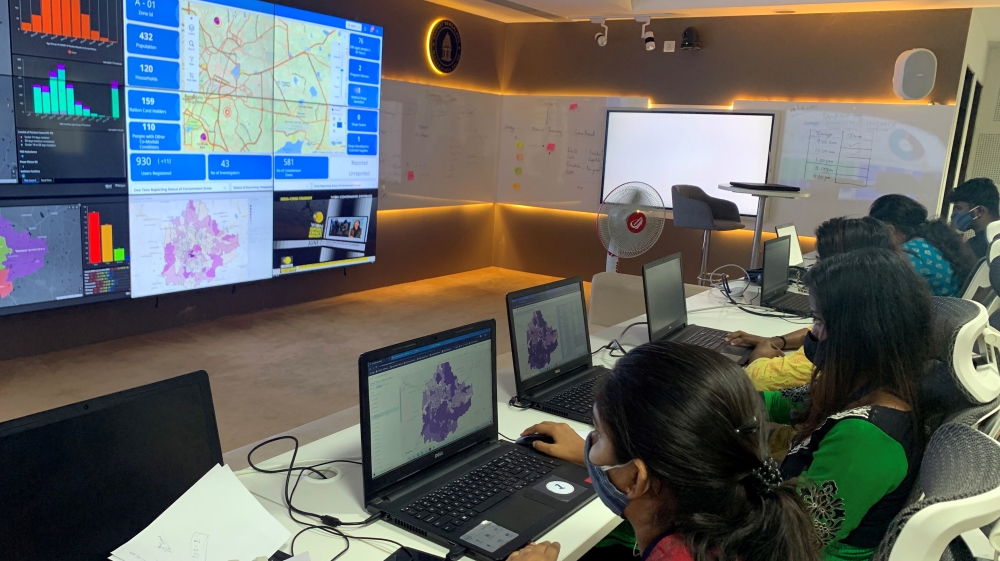 On June 9, a minister in southern Karnataka state posted an infographic on Twitter showing the number of recorded COVID-19 infections in the city of Bengaluru were half that recorded in New Zealand, a country celebrated for getting the spread of the disease under control early on in the pandemic.

At the time, only about 450 cases of the novel coronavirus had been recorded among Bengaluru’s 12.5 million people, compared with about 1,150 among New Zealand’s 4.88 million population.

The city – which has more than double the population of New Zealand – “stumps the Kiwis”, said the caption to the image posted by Minister for Medical Education of Karnataka Sudhakar K.

His tweet was liked and retweeted by thousands. But the celebration was short-lived.

Thanks partly to a high-tech testing and tracing system monitored by masked officials on giant screens in a city “war room”, Bengaluru had contained the outbreak better than cities like Mumbai, which tallied more than 100 times as many cases.

People wearing masks to protect against the coronavirus walk down in busiest avenue road area in Bengaluru [File: Jagadeesh NV/EPA]

Two and a half months on, Bengaluru, dubbed India’s Silicon Valley for its technology firms and startups, has reported more than 110,000 cases. Where its infections in early June rose by approximately 25 a day, the daily infection rate is now more than 2,500. In New Zealand, the total caseload stood at 1,339 as of August 25.

Bengaluru’s early response was lauded by India’s government as a model for its use of health surveys combined with efforts to tap technology expertise and cutting-edge software in order to analyse the spread of the disease.

But after India eased a nationwide lockdown in early June, epidemiologists and government officials involved in the city’s response to the pandemic said they realised they had not planned enough.

The experience shows the extent of the challenge faced by large cities around the world, showing how rapidly an outbreak can snowball out of control.

“The city had three to four months to plan for a surge in cases, but the city did not plan for the future. They mostly assumed that the lockdown implementation was sufficient,” said Giridhara Babu, an epidemiologist advising the state of Karnataka.

In late March, India enforced one of the world’s strictest lockdowns. Karnataka state was ahead of that with its own measures.

It collaborated with the NASSCOM trade association to mobilise 150 employees from half a dozen IT firms to feed 20,000 international traveller records into a central system every day.

Residents were subject to a curfew that emptied parks, malls and the city’s notoriously clogged roads, and officials tapped companies such as Intel, Alphabet’s Google and Mumbai-based Fractal Analytics for expertise and tools to help trace, predict and control the spread.

Many gave up their personal information for these purposes. At thousands of drugstores, officials collected contact details for people who bought drugs like paracetamol, to keep tabs on their health.

A federal government study shows Karnataka on average tested 47.4 contacts of every COVID-19-infected person between January 22 and April 30, compared with the national average of six contacts per infected individual.

But in June, when lockdown restrictions eased, people flocked back to markets that sell fresh produce and flowers.

Besides locals, officials say tens of thousands of travellers streamed in from Maharashtra and Tamil Nadu, many unwittingly bringing the virus with them. The neighbouring states have been the two worst hit by COVID-19 in India.

“We were sandwiched between these two states which already had a very high viral load … so we were bound to get affected,” said Pankaj Pandey, the health commissioner for Karnataka.

An estimated 45,000 people from Maharashtra and another 20,000 from Tamil Nadu’s capital, Chennai, streamed into Bengaluru in June, he added.

“In the initial phase, the case numbers in Bangalore [currently named Bengaluru] were so few, that people all over the country felt Bangalore is the safest. That may also have caused people to ‘reverse-migrate’ back to Bangalore,” said one official involved in Bengaluru’s response.

“We didn’t look at the inbound travellers as a major source of infections,” the official said. “We never anticipated that many people would come.”

Officials from Bengaluru’s municipal body, the Bruhat Bengaluru Mahanagara Palike (BBMP), did not respond to queries on whether it failed to address gaps in its modelling systems.

“Aggressive testing of contacts and home isolation is the way to contain the spread,” she said. “That is being taken very seriously and is being done right now.”