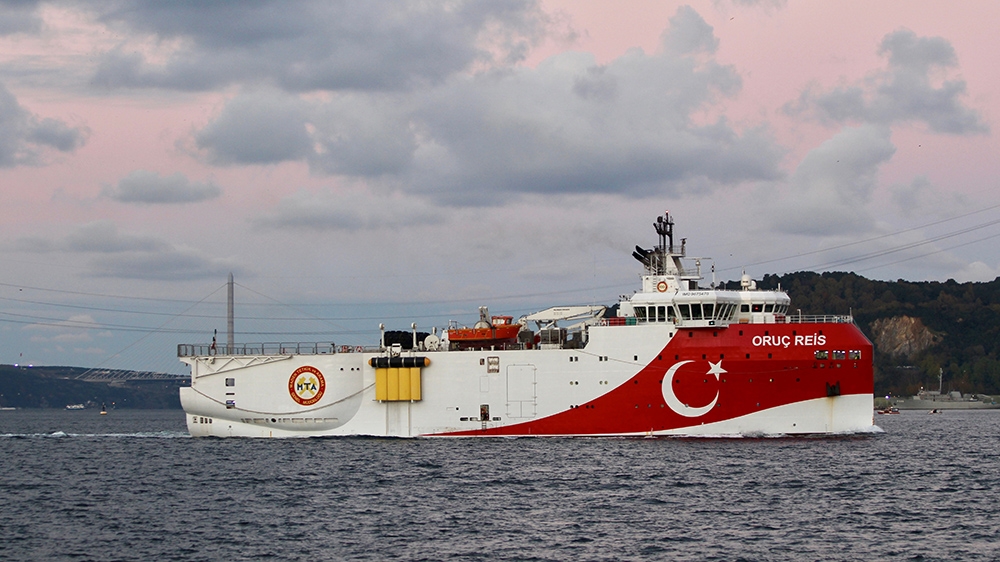 Turkey’s President Recep Tayyip Erdogan has warned he would make “no concessions” in the eastern Mediterranean and that Ankara is determined to do whatever is necessary to obtain its rights in the Black Sea, Aegean and Mediterranean.

Speaking at an event on Wednesday commemorating the 11th-century military victory by Seljuk Turks over the Byzantine empire at Malazgirt, Erdogan also called on Turkey’s counterparts to avoid mistakes that he said would bring their destruction.

“We don’t have our eye on someone else’s territory, sovereignty and interests, but we will make no concessions on that which is ours,” Erdogan said, urging Greece to “avoid wrongs that will be the path to ruin”.

“We will not compromise what is ours… We are determined to do whatever is necessary.”

Tensions over energy resources escalated between Turkey and Greece after Ankara sent its Oruc Reis survey vessel to disputed eastern Mediterranean waters this month, a move Athens has called illegal.

Germany has sought to mediate between Ankara and Athens.

On Tuesday, foreign ministers of Turkey and Greece said they wanted to solve the matter through dialogue following talks with their German counterpart Heiko Maas.

Al Jazeera’s Sinem Koseoglu, reporting from Istanbul, said Turkey had called Greece “a spoiled child that has unconditional support from the European Union”, and had also stressed the importance of why honest mediation is necessary for dialogue.

“Turkey says it is open to dialogue with Greece only if there is a fair distribution of rights in the eastern Mediterranean,” Koseoglu said.

“But if Athens continues to present conditions for dialogue and doesn’t give up its uncompromising approach in the region, Ankara says a real conflict may become unavoidable.”

Military exercises in the eastern Mediterranean

“The eastern Mediterranean is turning into an area of tension. Respect for international law must be the rule and not the exception,” Parly said on Twitter, adding that it “should not be a playground for the ambitions of some”.

Three Rafale fighter jets and a warship equipped with a helicopter will be part of the joint military exercises, she said.

Relations between France and Turkey have soured in recent months over Ankara’s actions in NATO, Libya and the Mediterranean.

President Emmanuel Macron has called for the EU to show solidarity with Greece and Cyprus in the dispute over natural gas reserves off Cyprus and the extent of their continental shelves and pushed for further sanctions at EU level, although there are divisions in the bloc over the issue.

“Our message is simple: Priority to dialogue, cooperation and diplomacy so that the eastern Mediterranean becomes an area of stability and respect for international law,” Parly said.