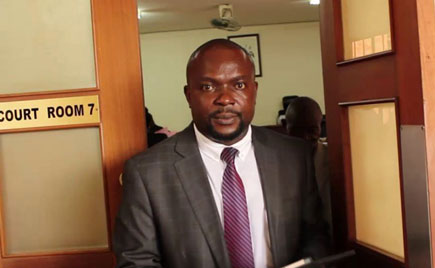 Journalists have been asked to pay him Shs 10,803,000 as damages and costs in the torture and assault case they lost.

These dragged Waninda to court accusing him of assaulting them as they covered a case in which he was involved but unfortunately the case didn’t go on very well on the side of journalists after the matter being dismissed by High court judge Andrew Bashaija.

After receiving this judgment, Counsel Eron Kiiza asked his clients (Journalists) to keep calm as they await the outcome of the appeal they filed in court over the same matter.

He promised that he will ask court to stay execution of the matter until the appeal is done.

The journalists dragged the Judicial officer to court accusing him of assaulting them physically on top of damaging their cameras as they covered a land grabbing case in which Waninda was involved.

Dismissing the case before High court, Justice Bashaija ruled that there was no sufficient evidence brought before court and that the beating of journalists is not counted among human rights violations.

This matter has become the talk of the town especially among journalists who say it has set a bad precedent that has to be challenged so that journalists’ rights can be properly defended especially when on duty.

Related Topics:courtsafety of journalists
Up Next