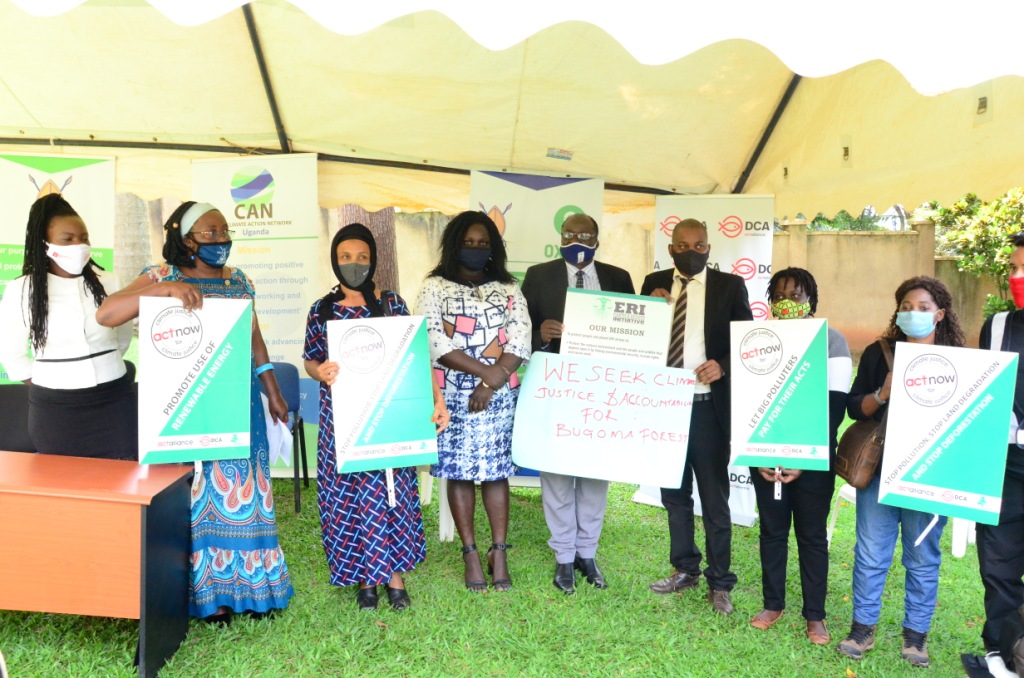 Environmental activists led by Climate Action Network-Uganda (CAN) have expressed their utmost concern in regards to the sale of Bugoma Forest.

According to CAN and other organizations, Bugoma Central Forest Reserve covering over 41.144 hectares and one of the largest remaining blocks of natural forests along the Albertine rift valley, should not be tampered with.

Speaking during the press conference held at Human Rights House in Nsambya, John Mary Odoy, Climate Ambition Ambassador-Uganda cited that NEMA should be informed that once Bugoma Forest is gone, the Country stands to lose its biodiversity.

“The moment we have Bugoma turned into a sugar cane plantation, we lose our diversity, the 260 species of trees in the forest will eventually die, habitats for animals and birds including over 500 chimpanzees and 225 birds which are tourist attractions will all vanish among others,” Odoy said.

“NEMA should be aware that Ugandans are alert and that the early communication as outlined in the impact assessment report clearly states that the land has been given out for sugarcane planting and other projects. Literally, the country stands to benefit better from Bugoma Forest which brings in government revenue through the tourism sector and directly benefits the locals in the area,” he further stated.

Uganda made a commitment to address  climate change concerns which include reducing  emissions by 22% and keeping  the  temperature low and one of the contributors to the achievement of this ambition is to increase tree coverage  in order  to have  carbon gains and one key focus activity  in the  National Adaptation Plan is community  tree planting.

NEMA, on Monday August 24, issued a statement denying allegations that it sold part of Bugoma forest (21.42 square miles) to Bugoma Sugar Limited to set up a sugarcane plantation and factory.

“National Environment Management Authority (NEMA) would like to clarify the misleading stories that have been running in sections of the media purporting that the institution authorized sale of Bugoma Central Forest Reserve to Hoima Sugar Limited, for sugarcane growing,” reads part of the statement.

NEMA maintains that the 1995 environment law puts all natural resources in the care of the government for the benefit of the greater majority. For persons and entities that held titles before 1995, the Government of Uganda would have to acquire their interest or compensate them in order to protect the natural resources.

“In these circumstances, the best remedy was for NEMA to regulate permissible activities on the land whose ownership had been determined by court.

As such, different sections of the said land were legitimately approved for undertaking of legal activities including sugar cane plantation (9.24 sq. miles) on an area that was entirely grass land(not forested) and Eco-tourism Centre(1.97 sq. miles) Cultural Site(0.156 sq. miles) and the natural  reserved  forest  and nature walk-ways covering about 6.17 sq. miles among others,” the statement further indicates.

NEMA also revealed that all the fragile ecosystems within the project area including the rivers, streams, wetlands, swamps and steep hill slopes among others, shall be protected in accordance with the law and the developer is required to undertake enrichment planting on an area measuring 3.8919 sq. miles comprising the buffer zones bordering the Bugoma Central Forest, River Hohwa and its tributaries.

Hussein Kato Muyinda, the Earth and Rights Executive Director urged parliament to seriously look into the matter since it’s their constitutional obligation to protect the natural resources.

Muyinda further called upon the public to speak out on the matter and strongly condemn NEMA’s action.

“This is a total violation of human rights. As you all know, when a tree is destroyed; it’s like killing a human being.”