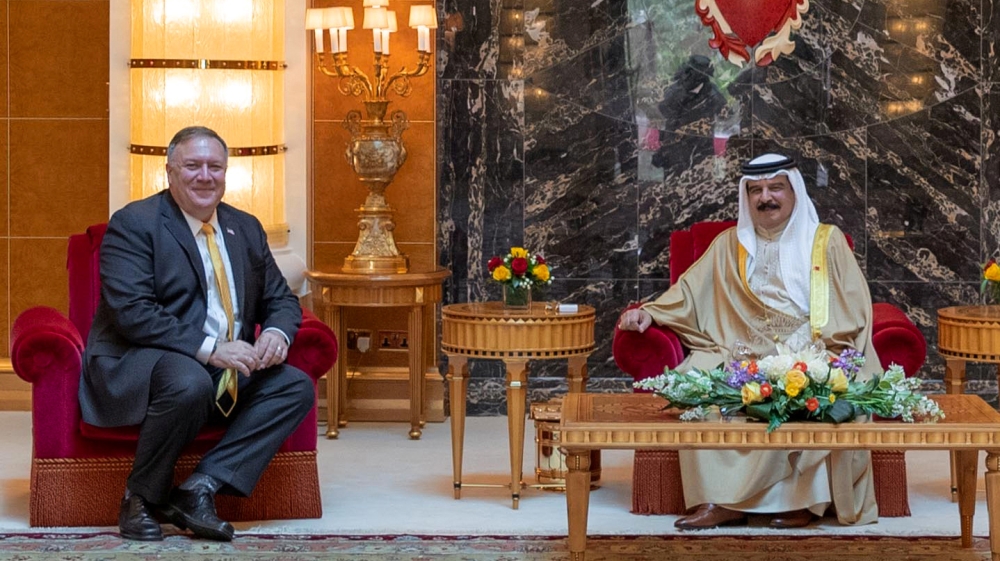 Bahrain’s king has told visiting US Secretary of State Mike Pompeo that the Gulf state is committed to the creation of a Palestinian state, according to state media, in an implicit rejection of Washington’s push for Arab countries to swiftly normalise ties with Israel.

The top US diplomat was in Manama on Wednesday as part of a Middle East tour aimed at forging more links between Israel and the Arab world on the back of a US-brokered deal with the United Arab Emirates earlier this month.

The agreement – which makes the UAE the third Arab country to agree to establish relations with Israel after Egypt and Jordan – was slammed by the Palestinians.

Before Bahrain, Pompeo was in Sudan where Prime Minister Abdalla Hamdok said on Tuesday his transitional government has “no mandate” to take the step of establishing relations with Israel.

And on Wednesday, Bahrain echoed the sentiments of its ally and regional heavyweight Saudi Arabia that accord with Israel would not materialise without the establishment of an independent Palestinian state.

According to the official Bahrain News Agency, King Hamad bin Isa Al Khalifa told Pompeo his country remains committed to the Arab Peace Initiative – which calls for Israel’s complete withdrawal from the Palestinian territories occupied after 1967, in exchange for peace and the full normalisation of relations.

“The king stressed the importance of intensifying efforts to end the Palestinian-Israeli conflict according to the two-state solution … to the establishment of an independent Palestinian state with East Jerusalem as its capital,” the agency reported.

Pompeo said in a Twitter post that he discussed with Bahrain’s royal rulers only the “importance of building regional peace and stability” and “countering Iran’s malign influence”.

Met today with Crown Prince of Bahrain, His Royal Highness Salman bin Hamad Al Khalifa. We discussed the importance of building regional peace and stability, including the importance of Gulf unity and countering Iran’s malign influence in the region.

Manama, whose contacts with Israel date back to the 1990s, was the first Gulf country to welcome the UAE rapprochement and was considered by some observers a frontrunner to follow in its footsteps.

Like most Gulf countries, Bahrain shares with Israel a common enemy in Iran, which Manama accuses of instigating protests by the nation’s Shia Muslim community against the ruling Sunni Al Khalifa dynasty.

But the UAE’s controversial step has been met with criticism from some parts of the Arab world, with the Palestinian leadership condemning it as a “stab in the back” – and even US allies in the region have been cautious in their response.

Pompeo in the UAE

Saudi Arabia, while not condemning the UAE-Israel deal, has refused to normalise ties until Israel signs an internationally recognised peace accord with the Palestinians.

Other Gulf states including Oman, Qatar and Kuwait also face barriers to warming ties with Israel, said Cinzia Bianco, a research fellow at the European Council on Foreign Relations.

She said in these countries “popular opposition towards normalisation is still quite high”, despite colder sentiment towards the Palestinian cause among some quarters of the youth, especially in Saudi Arabia.

After Bahrain, Pompeo headed to the UAE, the last stop of his tour.

On Tuesday, he spoke by phone with Abu Dhabi’s Crown Prince Sheikh Mohammed bin Zayed Al Nahyan, who is seen as the driving force behind the agreement with Israel, which still awaits negotiations on a number of details before it is officially signed.

The two discussed the deal “and the prospects for strengthening it in a way that serves the foundations of peace and stability in the region”, the official Emirati news agency WAM said.

Israeli Prime Minister Benjamin Netanyahu has denied reports that the UAE deal hinges on the sale of US F-35 stealth fighter jets to the Emirates, saying he opposes a move that could reduce Israel’s strategic edge in the region.