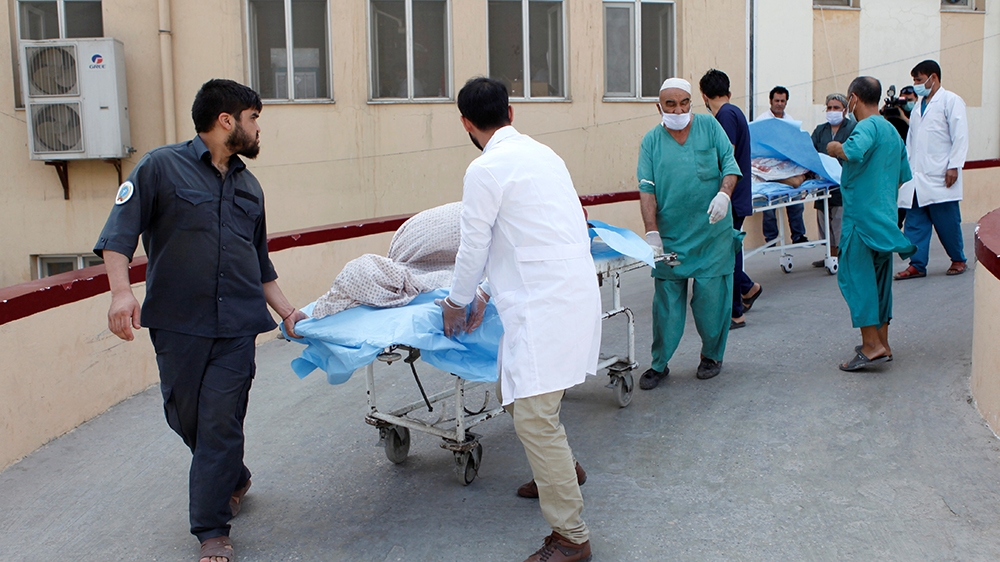 A wave of attacks across Afghanistan has left at least 12 dead and many wounded in the last 24 hours, officials said, including a Taliban truck bombing in the country’s north that targeted a base for Afghan forces.

At least three people, including two Afghan commandos and a civilian, were killed in the truck suicide bomb attack in the northern Balkh province, according to Munir Ahmad Farhad, the spokesman for the provincial governor.

According to Hanif Rezaie, the spokesman for the Afghan army corps in the north, an initial military report said at least six commandos and about 35 civilians were wounded in that explosion, which also destroyed or damaged dozens of nearby civilians houses.

“Most of the wounded civilians are women and children,” Rezaie said on Tuesday.

Relatives react in front of a hospital, where their family member has been transferred for treatment after a truck bomb blast in Balkh province [Reuters]

Afghan civilians continue to bear the brunt of the war across the country, despite efforts to launch peace talks between the Kabul government and the Taliban, and to find a plan for post-war Afghanistan.

The talks were envisaged under a US-Taliban peace agreement signed in February, but their start has been hampered by a series of delays over prisoner releases.

Also on Tuesday, an attack at a checkpoint of pro-government forces in western Ghor province killed eight troops and wounded five, said Arif Aber, spokesman for the provincial governor.

The attack in Shahrak district set off five hours of gun battle.

No one immediately claimed responsibility for that attack, but authorities blamed the Taliban.

In the capital of Kabul, a roadside bombing killed a police officer while a policewoman and her driver were wounded when unknown attackers opened fire on them, said Ferdaws Faramarz, spokesman for the Kabul police chief.

The policewoman, Saba Saher, also a well-known actress, is said to be in stable condition.

No one claimed responsibility for the attacks in Kabul.

Separately, the Ministry of Defence released a statement late on Monday saying 91 Taliban fighters were killed during an air and ground operation by Afghan army troops trying to open the highway between northern Kunduz to Khanabad districts.

The statement said another 50 Taliban fighters were wounded in the fighting and the highway was later reopened for traffic.

According to a UN report released in July, 1,282 people were killed in violence in Afghanistan in the first six months of 2020.