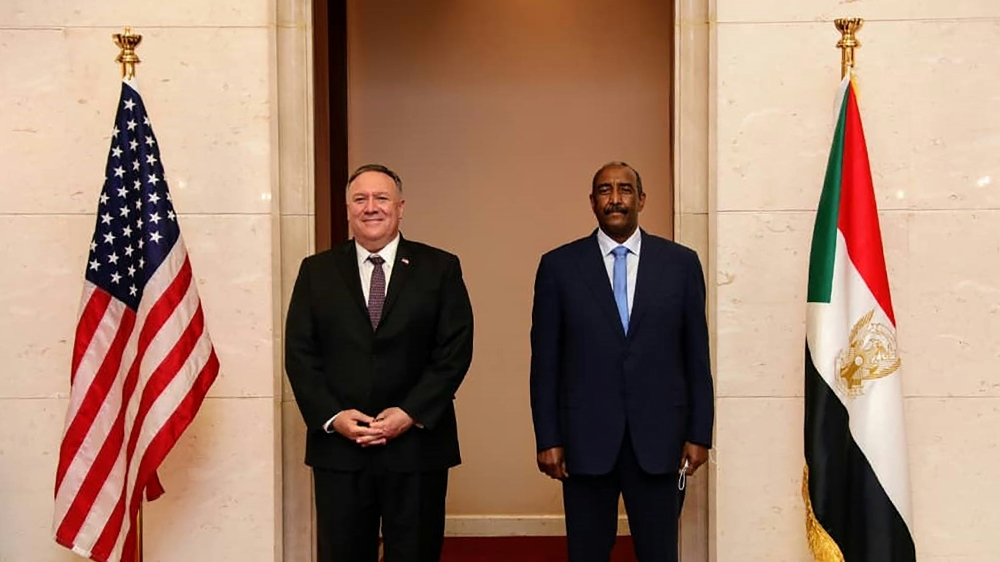 US Secretary of State Mike Pompeo has arrived in Sudan as part of a Middle East tour on the back of a US-brokered deal that will see a restoration of ties between Israel and the United Arab Emirates.

Pompeo’s visit on Tuesday is meant to discuss the normalisation of ties between Sudan and Israel and also show US support for the country’s fragile transition to democracy.

Pompeo is the first US secretary of state to visit the African county since Condoleezza Rice in 2005.

Happy to announce that we are on the FIRST official NONSTOP flight from Israel to Sudan! pic.twitter.com/eOXNsBAozC

He was in Israel on Monday, the first stop of his tour of the region that came following the August 13 agreement by Israel and the UAE to establish diplomatic ties.

Sudan is on a fragile path to democracy after the popular uprising led the military to overthrow former leader Omar al-Bashir in April 2019. A military-civilian government now rules the country, with elections deemed possible in late 2022.

Pompeo was also scheduled to discuss the removal of Sudan from the US list of state sponsors of terrorism.

Ahead of the tour, the State Department had said Pompeo would discuss “continued US support for the civilian-led transitional government and express support for deepening the Sudan-Israel relationship”.

Israel, meanwhile, remains technically at war with Sudan and has no formal diplomatic relations with it.

Asked if Pompeo would announce a breakthrough in Sudan like the normalisation of ties with Israel or a removal of US sanctions, a US official on board Pompeo’s flight said: “It’s possible that more history will be made.”

Speaking in Jerusalem on Monday, Pompeo and Israeli Prime Minister Benjamin Netanyahu said they were hopeful that other Arab states would follow suit – in part to boost an alliance against their common arch foe Iran.

The US-sponsored deal between Israel and the UAE announced on August 13 was denounced by the Palestinians as a “betrayal” of their cause.

It was only the third such accord Israel has struck with an Arab country, after Egypt and Jordan.

The two new partners have since said they want to promote trade, especially the sale of Emirati oil to Israel and Israeli technology to the UAE, as well as boosting tourism by establishing direct air links.

Pompeo will also visit Bahrain and the UAE, according to a State Department statement. Officials said stops in Oman and Qatar are also possible.