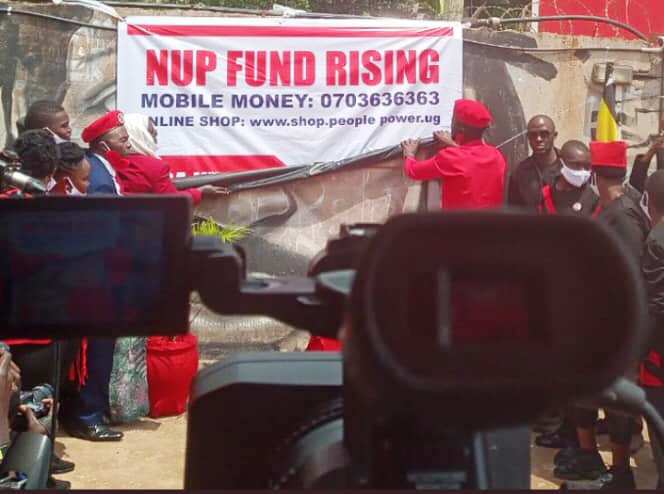 Robert Kyagulanyi alias Bobi Wine, the president of the National Unity Platform party (NUP) has ridiculed a section of party members who he referred to as ‘opportunists’ for working tirelessly in frustrating the party efforts.

“There are some members who joined us not with the intention of ousting dictatorship and that alone sends us a signal that we must open our eyes wide,” Kyagulanyi said.

He emphasized that among the frustrators are the politicians who joined the party but still serve their old parties.

He made these remarks while officiating three combined functions at NUP party headquarters in Kamwokya; launching the fundraising campaign, unveiling the new NUP Election Management Committee and unveiling new party members from the Motor Sport Championship.

“We launched NUP to avoid this fracas but it seems there are people who still want to disorganize us. It is not a force to belong to NUP though we are open to anyone. Someone is free to belong to another political party and we still work together as it has been because we have worked with political parties like JEEMA and others,” he noted.

Adding his voice to the president, Joel Ssenyonyi, the party spokesperson, warned anybody who has a special mission of killing NUP to stop before their acts expose them.

“They come here we give them NUP cards and they go outside there to frustrate the efforts of the party. By virtue that you decide to be a member of our party, you are expected to do things that promote it not demote it,” he noted.

Without mentioning specific individuals, the party leaders revealed that the so called ‘moles’ played a big role in frustrating them in the recently concluded elections of the youth committees.

“It is even seen by a breastfeeding baby that Bassaja Mivule is part of them. Imagine after getting the card, he is the one abusing us and our president,” one supporter said.

The party also launched the fundraising campaign dubbed ‘Muda ku Muda’ (meaning Shs 10,000 each) which seeks to collect over Shs 1.5 trillion to support Mr. Kyagulanyi in his 2021 presidential bid.

“We know many people outside there would wish to do what we are doing but they don’t have time and others fear government frustrations. Through this campaign we can all achieve and we call upon everyone to give in the name of the struggle,” Aishah Kabanda, the Chairperson of the Fundraising Committee said.

Meanwhile, the party also unveiled the Elections Management Committee led by Mr. Masiwa Lukamba as its chairperson and it shall be in charge of all the NUP electoral activities.

“Please avoid corruption one of the things why we are fighting this war is because of corruption that has dominated the government officials. We shall deal with any corrupt official the way we shall deal with them when we take power,” Kyagulanyi cautioned the election committee members.

“Don’t discriminate candidates basing on their race, financial ability, age or political positions. We want to set an example which will be followed by the rest,” he added.

The party, in addition, also unveiled over 30 motorsport champions led by their leader Shafiki Lumbuye.

Related Topics:nupPoliticsrobert kyagulanyi
Up Next

Indian goes on trial for spying on Sikhs, Kashmiris in Germany | Germany News