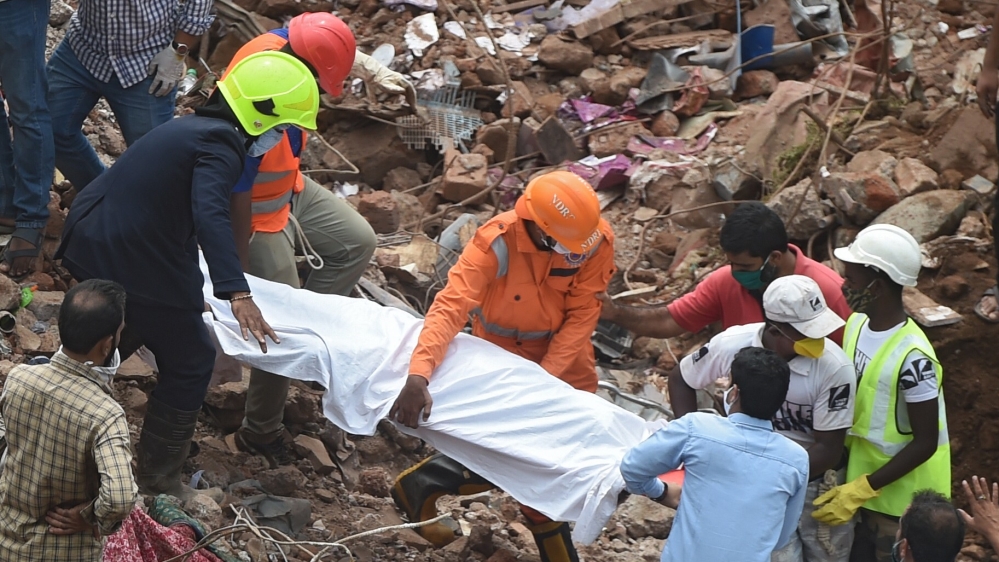 Rescuers in India pulled a four-year-old boy from the rubble of a collapsed building to loud cheers on Tuesday, hours after the five-storey apartment block came down “like a house of cards”, burying up to 70 people.

The accident late on Monday in the western town of Mahad, south of Mumbai, led three disaster-response teams and sniffer dogs to work through the night, combing tin sheets, twisted metal and broken bricks.

The cause of the accident was not immediately clear but building collapses are common during India’s June-September monsoon, with old and rickety structures buckling after days of non-stop rain.

National Disaster Response Force spokesman Sachidanand Gawde told reporters emergency workers had so far retrieved the bodies of two victims in addition to the little boy who survived the collapse.

Earlier, a local official told the Reuters news agency that rescue workers had pulled more than 60 people alive from the rubble.

Video footage of the rescue effort showed onlookers applauding and cheering as the child was pulled from the wreckage and hauled onto a stretcher.

Estimates of the number of people still trapped ranged from 20 to 70 after dozens managed to flee when the building began to shake.

“No one knows how many people are actually stuck inside,” a Mahad police official told the AFP news agency on the condition of anonymity, adding that authorities had initially feared the worst, with early estimates as high as 200.

Mahad legislator Bharat Gogawale told AFP that many of the building’s occupants appeared to have been out shopping when the accident occurred at about 7pm local time (13:30 GMT).

“As per latest estimates, we think 20 people are trapped inside,” he said.

Others had left the town altogether, preferring to wait out the pandemic in their home villages.

“Many families were not residing in the building as they went to their native places due to the coronavirus-induced lockdown,” district official Nidhi Choudhari told the Press Trust of India.

Mustafa Chafekar, a resident who had been in home quarantine after testing positive for the virus, told the Mumbai Mirror that he and his family of five initially thought they were experiencing an earthquake.

“We ran down immediately … The whole (structure) collapsed right in front of us,” the 39-year-old said of their escape.

He said residents had previously complained to the builders about the condition of the complex.

“It fell like a house of cards,” Jagtap said.

Saddened by the building collapse in Mahad, Raigad in Maharashtra. My thoughts are with the families of those who lost their dear ones. I pray the injured recover soon. Local authorities and NDRF teams are at the site of the tragedy, providing all possible assistance: PM

Prime Minister Narendra Modi tweeted that he was “saddened” by what happened.

“My thoughts are with the families of those who lost their dear ones. I pray the injured recover soon,” he said.

The death toll from monsoon-related disasters this year has topped 1,200, including more than 800 in India.

The building collapse is a further blow to the state of Maharashtra, already hit hard by the coronavirus, with the region accounting for more than a fifth of India’s more than three million infections.

The pandemic has also cast a shadow on India’s continuing Ganesha Chaturthi festival, with Hindu devotees ordered to sharply scale down celebrations and rituals honouring the much-loved god.

Indian goes on trial for spying on Sikhs, Kashmiris in Germany | Germany News