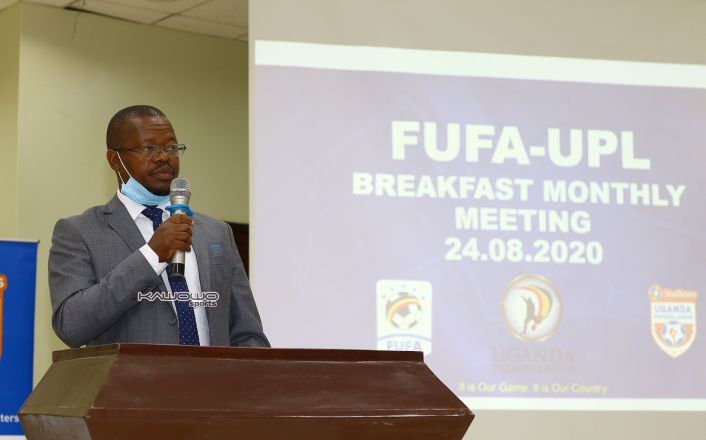 The meeting which was chaired by FUFA president Eng Moses Magogo, took place on Monday, August, 24 at May Apple Hall, Imperial Royale Hotel in Kampala.

The issues concerning the Covid-19 relief grants from the World Football governing body (FIFA) and the African Football ruling body (CAF) headlined the meeting’s agender plus the possible return of the StarTimes Uganda Premier League.

“As we FUFA, we had a promise to initiate FUFA-UPL breakfast monthly meetings, we have delivered. Let us remain supportive as we continue to involve the different parties. We all have a common agenda which is sport. There is a lot of value addition. We must protect the brand of the UPL, it is a baby we must protect at all times. FUFA is in control of these funds (COVID-19) funds,” said Magogo via on the FUFA website.

He added, “The objective is to compensate losses by making payments directly to the club accounts. We also have to ensure that football eventually resumes since you are aware that there are 22 unfinished matches that have to be completed before the season new season resumes in October 2020.”

At the meeting, Magogo was flanked by members of the FUFA Executive, Uganda Premier League board chairperson Arinaitwe Rugyendo, the board members, club chairmen, Chief Executive Officers (CEO), other officials as well as the media members.

On issues concerning the StarTimes sponsorship package, the UPL Chairman Bainaman noted that the final batch of the sponsorship money by league sponsors has been delayed following the abrupt end of the league due to Coronavirus.

“The 2019-20 StarTimes Uganda Premier League was unique in such a way that the Coronavirus pandemic caused an abrupt end of the season. This brought a situation where the remaining patch of the sponsors’ money has not been paid and there is a fraction is being discussed,” he said.

On the possible return of football in the post COVID-19 epoch, FUFA Deputy CEO Decolas Kiiza noted that they are engaging government officials on a systematic return with Standard Operating Procedures.

“There is need to return to the fields of play by yesterday rather than tomorrow. FUFA continues to engage Government through the National Council of Sports and Ministry of Health on how football can best return, even without fans in respect of the Standard Operating Procedures (SOP’s),” Kiiza said.