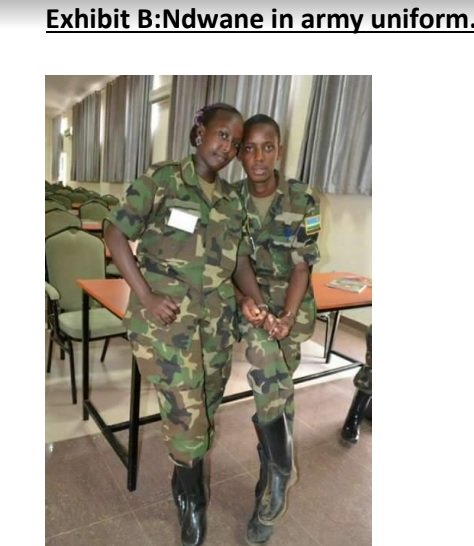 On Friday, May 1, 2020, the Chieftaincy of Military Intelligence (CMI), launched a secret operation aimed at busting what was considered a cell of collaborators of Rwanda within UPDF.

The operatives’ focus was the Airforce – a key institution of the armed forces which President Museveni has been keenly developing over the last one decade.

During the operation which lasted three days, Airforce staff were arrested. These are Phillip Neville Ankunda attached to Special Forces headquarters as a Pilot, Privates Nathan Ndwane, Moses Asiimwe Makobore and Godfrey Mugabi attached to Nakasongola Airforce Wing as students of Engineering and Aircrafts Maintenance.

Additionally, four Police officers, were picked from their respective duty stations by the Regional Police Commanders and handed over to CMI.

All the arrested 7 officers are friends who happened to belong to the same WhatsApp chat group.

The arrest was triggered by a message posted by Private Ndwane in which he chronicled the history of Banyarwanda tribe and insinuated that the group is discriminated in Uganda.

This was indeed a sensitive message and members on the group tried to stop him from writing such stuff as a member of the security force.

Investigators retrieved photos of Private Ndwane in Rwandan army uniform. Way back he attended the ‘Ingando’ Programme in which youths with Rwandan heritage are given cadre-ship course.

President Museveni has always complained about this programme that it indoctrinates Ugandans of Rwandan origin.

Rwanda presents ‘Ingando’ programme as an aspect of the government’s post-genocide reconstruction policy of national unity and reconciliation.

Rwandans and friends of Rwanda are encourage to take part in the programme administered by ruling party officials and the army.

However, President Museveni has reportedly expressed his reservations over the programme with his Rwandan counterpart, Kagame.

To Museveni, the programme is aimed at brainwashing people including Ugandans to love Rwanda more than their country.

This, Ugandan officials say, creates a fertile ground for recruitment of spies and infiltration of key institutions in Uganda.

Meanwhile, Ndwane was also found with Rwandan national Identity Card along with other members on the chat.

These officers had acquired Rwandan IDs before they entered their respective forces.

The soldiers’ supporters told ChimpReports that they wanted to get jobs during good old days when Ugandan graduates were on high demand in Rwanda.

CMI investigated if there was more to it.

The associates of the troubled officers further said after weeks of investigations, investigators failed to find a ‘smoking gun’ in terms of evidence of subversive activities by the group beyond a swirl of suspicion.

However, an investigation by this website established that some of these Ugandan army officers were openly showing their loyalty to the Rwandan government and its security services.

For example, in one of the chats, one of the soldiers showed loyalty to then Rwandan army chief Gen Patrick Nyamvumba.

A source briefed about this investigation wondered: “How could these UPDF soldiers say they were loyal to Rwanda? Especially at a time our relations with them were at their lowest? Before joining the army, they were indoctrinated during a study trip to Rwanda. They even got IDs of Rwanda.”

“Yet, the law here requires that for one to join UPDF, one must be a Ugandan. Why didn’t they declare their loyalty to Rwanda before joining UPDF?” exclaimed a source who preferred anonymity to speak freely.

Nevertheless, during the investigation, it turned out that Lt Phillip Ankunda had a close Rwandan friend, Jackie Batamuriza.

Security is investigating reports that Batamuriza is an agent of the neighbouring country.

Batamuriza was briefly questioned by the military intelligence before being freed.

Nevertheless, the security services believe Ankunda and his two colleagues Ndwane and Makobore being principal suspects of a Rwandan cell in the Airforce.

It is said Sabiiti and Akandwanaho just happen to be victims of circumstances-being in the same WhatsApp chat with the principal suspects.

While some sections of the media reported that Ankunda and his colleagues worked with Rwanda to infiltrate and compromise the unit that manages Uganda’s war jets, officials said this was yet to be fully confirmed.

Rwanda and Uganda have for the last three years been teetering on the verge of an all-out war, leading to intensified intelligence gathering by their respective military institutions.

Both countries maintain heavily-armed military units along their borders as a precautionary measure.

The arrest of the Ugandan army officials shows the impact of the bad bilateral relations between the two countries on their respective armies.

In Rwanda, perceived supporters of Uganda have since been removed from senior positions in the armed forces and other government institutions.

It is alleged the army wanted to charge only three Airforce officers – Ndwane, Makobore Asiimwe and Ankunda with conduct prejudicial to the good order and discipline of the UPDF contrary to section 178 of the UPDF act.

The police officers were to be released upon further interrogation of the 3 air force officers.

However, friends of police officers Akandwanaho and Sabiiti said when they petitioned the leadership over their friends’ incarceration for over 90 days, CMI moved quickly to charge and remand them to avoid media backlash over the illegal detention.

“We are aware that there is no evidence at this stage that can secure conviction beyond mere suspicion which is why prosecution indicated that investigations are still ongoing on more than 3 months after the arrest. The prosecutors are yet to get files from CMI,” the detained police officers’ friend said.

However, a senior military official we contacted over this matter, said, “Security matters are sensitive. What you think is small can be more harmful.”

Asked if they had enough evidence implicating the arrested officers, the senior army officer noted: “What a coincidence that they were all connected somehow and above all in Airforce?”

It is alleged that between February and May 2020, the accused persons and others still at large in various places within Kampala city shared sensitive and classified information to agents of Rwanda authorities with intention to prejudice the security of the defense forces of the government of Uganda.

The soldiers and police officers, however, denied the charges.

Prosecution asked for more time to allow the army complete its investigations into the matter.

The accused were subsequently remanded to Makindye military police barracks until August 31, 2020.