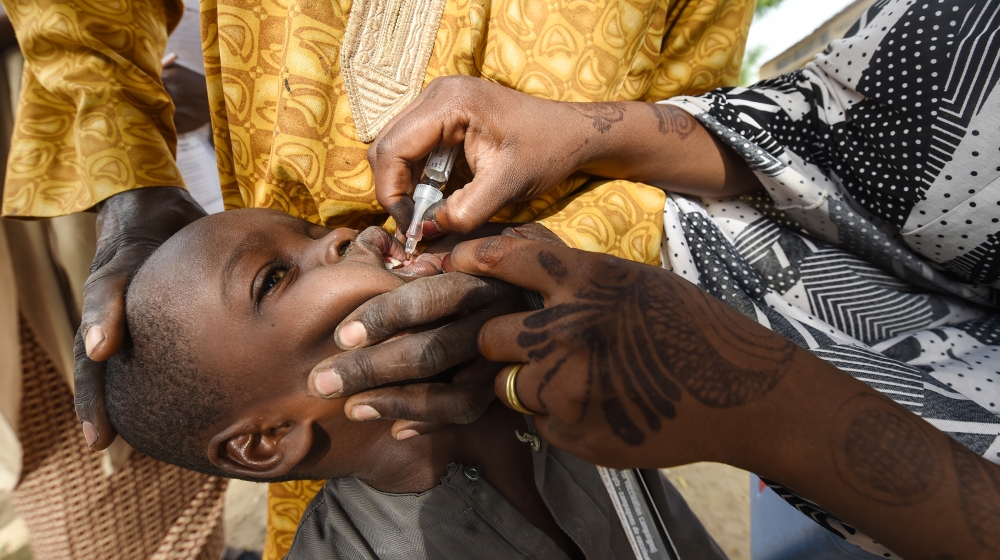 Health authorities have declared Africa free of the wild polio virus after decades of efforts, a major step in the campaign to eradicate the crippling viral disease worldwide.

Tuesday’s historic announcement by the African Regional Certification Commission for Polio Eradication during a World Health Organization (WHO) event came four years after the continent’s last case was reported in northern Nigeria.

The commission, an independent body, confirmed that all 47 countries in the WHO’s Africa region have eradicated the disease that attacks the nervous system and can cause irreversible paralysis within hours.

The news was hailed by health experts, who also urged continued vigilance over the still-existing threat posed by polio vaccine-derived outbreaks in more than a dozen countries.

“This is one of the greatest public health achievements, demonstrating that with science and solidarity we can beat viruses and save lives,” WHO chief Tedros Adhanom Ghebreyesus said.

Matshidiso Moeti, the WHO’s Africa director, called for a continuation in the efforts to protect children across the continent “against all forms of polio and other childhood diseases”.

She added: “We must take the lessons learned and best practices from eradicating wild polio virus to achieve Africa’s other public health goals and improve healthcare for all Africans.”

Big day for my African brothers & sisters – our continent will be declared #polio-free. This is one of the greatest public health achievements, demonstrating that with science & solidarity we can beat viruses & save lives. https://t.co/JhijcErtwM

However, the declaration does not mean Africa is polio free. Cases remain of the so-called vaccine-derived polio virus, which is a rare mutated form of the weakened but live virus contained in the oral polio vaccine.

That mutated virus can spark crippling polio outbreaks, and 16 African countries are currently experiencing one.

“Today’s celebration must be tempered by the expanding scope of outbreaks of vaccine-derived polio and the broader impact related to coronavirus,” said Seth Berkley, CEO of Gavi, the Vaccine Alliance as reported by WHO Africa on Twitter.

“Today’s celebration must be tempered by the expanding scope of outbreaks of vaccine-derived polio & the broader impact related to #COVID19.” #PolioFree #africakicksoutwildpolio #RC70AFRO pic.twitter.com/kci0UnRblV

Globally, wild polio case numbers have been cut drastically due to national and regional immunisation for babies and children. The disease remains endemic in Afghanistan and Pakistan, however.

“There’s nothing that prevents the virus from making the route from Pakistan and Afghanistan to Africa,” he said.

Despite the existing threats, the news brought a glimpse of hope as the continent is still struggling with the coronavirus pandemic, an Ebola outbreak in western Democratic Republic of the Congo (DRC) and the persistent deadly challenges of malaria, HIV and tuberculosis.

The WHO says this is just the second time a virus has been eradicated in Africa, after the elimination of smallpox 40 years ago.

The final push to combat the wild polio virus focused largely on northern Nigeria, where the armed group Boko Haram has carried out a deadly armed campaign since 2009.

Health authorities say success was delayed because vaccination was stopped for years amid community mistrust and Boko Haram attacks.

“The challenge was inaccessibility; how you deliver vaccines in hard-to-reach areas; how you gain the trust of those who need the vaccine,” Anis Siddique of the United Nations Children’s Fund told Al Jazeera.

Health workers at times carried out vaccinations on the margins of the insecurity, putting their lives at risk.

“We did not accomplish this alone. Tens of 1000s of health workers have dedicated their lives to fighting polio throughout Africa,” Funsho said on Twitter.

“We did not accomplish this alone. Tens of 1000s of health workers have dedicated their lives to fighting polio throughout Africa.” #poliofree #africakicksoutwildpolio #RC70AFRO pic.twitter.com/k8SNMi3jER

In 2015, Nigeria had been removed from the global list of polio-endemic nations, a step towards being declared polio free, but new cases were reported a year later in children in the north – a stark example of the difficulties in combating the disease.

Health authorities have warned that the coronavirus pandemic has disrupted vaccination work in many countries across Africa, leaving more children vulnerable to infection.

In April, WHO and its partners reluctantly recommended a temporary halt to mass polio immunisation campaigns, recognising the move could lead to a resurgence of the disease. In May, they reported that 46 campaigns to vaccinate children against polio had been suspended in 38 countries, mostly in Africa, as a result of the coronavirus pandemic.

Eradicating polio requires more than 90 percent of children being immunised, typically in mass campaigns involving millions of health workers – campaigns that would break physical distancing guidelines needed to stop the spread of COVID-19.

Related Topics:AfricaHealthNigeriaPolioWorld Health Organization
Up Next