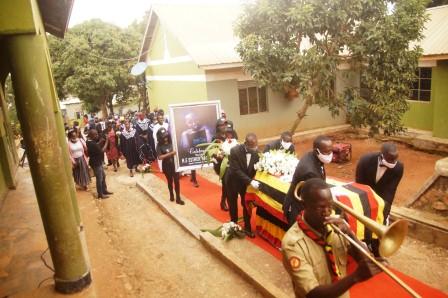 Activist Esther Nakajjigo who doubles as Uganda’s ambassador for women and girls has been praised for her advocacy for the rights of women and girls and other underprivileged members of the community.

Nakajjigo, the European Union leader in fighting violence against women and girls passed away on 13th June 2020 following a heavy storm accident which involved a gate and a car in which she was traveling at the Arches National Park in Utah county in the United States.

Due to COVID-19 restrictions that included shutting down of the international borders, her body was brought back to Uganda on Saturday August 22, 2020, with the help of various high profile personalities including First Lady and Education Minister Janet Museveni.

In a memorial service held at Princess Diana High School in Munyonyo, Kampala on Monday which was attended by among others Director CID Grace Akulo, Danish Ambassador to Uganda, European Union officials, Nakajjigo was hailed for her tremendous efforts to fight violence against women and girls.

Thomas Tiedemann, the acting Head of Cooperation of European Union in Uganda who represented Uganda’s EU Ambassador Atilio Pacific, praised Nakajjigo for dedicating her life to supporting the underprivileged.

“Esther dedicated her life to supporting the vulnerable and most underprivileged people in the society especially the youth. Esther’s outstanding service for the underprivileged members of the community, even at personal sacrifice can be traced way back when she used her personal resources to establish the Princess Diana Health Center III in Makindye, Kampala,” said Tiedemann.

Tiedemann said the deceased had, before her passing, traversed the country, reaching some of the remote corners of Uganda sensitizing girls and boys on the risks of teenage pregnancies and creating opportunities for teenage mothers so they could have a second chance in life.

“One of the outstanding achievements of Esther’s work I recall is the “Saving Innocence Challenge,” a reality TV show that saw girls from well off families go on an expedition to experience the reality of their underprivileged peers and seek to transform the lives of these disadvantaged girls,” he said.

Based on her outstanding work in Uganda, Nakajjigo was selected as one of the 16 young leaders worldwide to participate in the 2018 European Development Days (EDD) organised by the European Union institutions in Brussels, Belgium.

Grace Akulo, the CID Director praised Nakajjigo for her ideas that supported the Police in carrying out its mandate of fighting crime and more especially crime against women and girls.

“Esther was young but with great ideas. In 2017, she organised a programme and it was having all these girls who had dropped out of school, early marriages and connecting girls of schools like Gayaza High School to these children who were already having children,” said Akulo.

“This person of Esther is God sent. She was doing the right thing for the women and girls. We shall continue to support the office of the ambassador women and girls. They already have some cases which they reported. We are ready to pursue those criminal cases which were committed. As Police force, we have lost a partner,” Akulo added.

Prof Badru Katerega, the Vice Chancellor of Kampala University described the demise of Nakajjigo as an “irreparable loss.”

“It is an irreparable loss for all of us. I met H.E Esther in 2014 at National Theater when both of us were being honored with plaques for our exceptional, outstanding and selfless services towards the development of our country. We were honored together and I was wondering, what a small girl received a present almost equal to mine. I got interested in her,” he said.

The two bridged the gap between themselves and began working together in diverse areas most especially the protection of a girl child from teenage pregnancies.

“From 2014 till she passed on, I have really seen a talented, inspirational, calm, intelligent, gifted young lady. I have seen her metamorphosing from nowhere to somewhere. I have seen Esther tirelessly teaching, coaching and urging students in primary and secondary schools, young adults in universities, in refugee camps, in slums to jealously protect themselves from the rampant teenage pregnancies,” Prof Badru noted.

Badru called for maintenance and revamping of her projects so that through them, she can always be remembered.

Khalid Nyonjo, the Head Teacher of Princess Diana High School said that a mentor to many girls in Uganda as well as inspiration to many girls across the globe has been lost.

Nakajjigo was an old student at Princess Diana High School.

She was 25 years old at the time of her death.

She will be buried on Tuesday August 25, 2020 at Bulegeya in Masaka district.

Are EU countries using COVID-19 to clamp down on refugees? | Italy