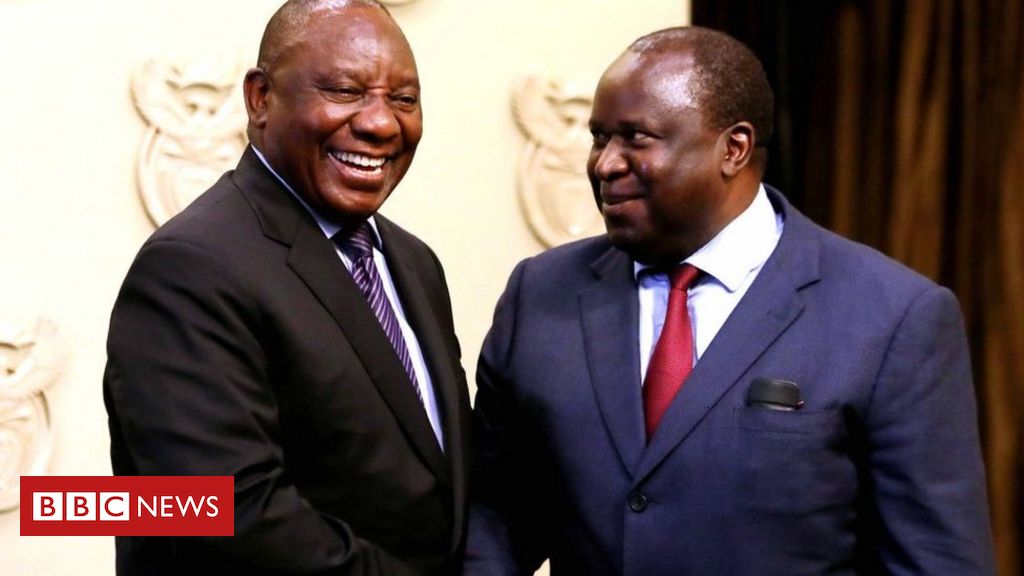 South Africa’s President Cyril Ramaphosa has “strongly reprimanded” his finance minister for tweets criticising the sacking of a top government official in Zambia.

“Presidents in Africa must stop this nonsense of waking up in the morning and fire a central bank governor,” Tito Mboweni tweeted.

Mr Rampahosa said the comments did not reflect the views of his government.

Zambia’s information minister said the tweets were “improper” and “immature.”

We are very surprised with Tito Mboweni’s immature and improper criticism of a sovereign decision by Zambia. The Minister should be attending to COVID problems facing the South Africans, our focus here. We will pursue matter diplomatically.

South Africa has the highest number of coronavirus infections and deaths in Africa.

In a statement on Monday, President Ramaphosa called Mr Mboweni’s comments “unfortunate”, adding that the issue was being addressed “so that it does not occur again”.

What did Mr Mboweni say?

In a series of tweets on Sunday, Mr Mboweni, a respected economist and an ardent Twitter user, challenged Zambia’s President Edgar Lungu to give reasons for the sacking of Denny Kalyalya as the central bank governor.

“This is not some fiefdoms of yours! Your personal property?! No!,” he tweeted, castigating President Lungu.

He threatened – in the since deleted tweets – that he would mobilise support if the governor was not reinstated.

“The governor was a good fella. Why do we do these things as Africans. The president of Zambia must give us the reasons why he dismissed the governor – or else hell is on its way. I will mobilise”.

“Looks like I am in trouble about my statement on the dismissal of the bank of Zambia governor. I stand by my statement. Central bank independence is key. Not negotiable. Let all central bankers speak out.”

But there won’t be any support coming from the South African government.

Mr Ramaphosa said the country enjoyed a strong historical relationship and his government was “committed to maintaining the deep and solid bonds of friendship” with Zambia.

Who is Tito Mboweni?

It is his love for cooking that has won the hearts of many, but he is, let’s say, not as talented in the kitchen as he is with numbers.

Apart from tweeting what he’s making for dinner, his posts have sometimes put him at loggerheads with other state officials.

He doesn’t seem to mind going against the party’s line for what he believes in.

He has also been vocal about government decisions that he disagrees with, earning the admiration of some South Africans.

Still, he is a senior government official, hand-picked by the president to handle an important portfolio, and some of his rants, like the tweets excoriating the Zambian president, have been interpreted as divisive and unhelpful.

So why was Zambia’s central bank governor sacked?

Denny Kalyalya was dismissed because of the poor disbursement of funds meant to stimulate the country’s struggling economy, according to a statement by the ruling Patriotic Front party, the local Lusaka Times news site reports.

But the Reuters news agency reported that Mr Kalyalya’s dismissal came barely three days after Zambia’s central bank cut its benchmark lending rate by 125 basis points to 8% to try to safeguard the financial sector’s stability and protect livelihoods in the wake of the Covid-19 pandemic.

Mr Kalyalya, a respected former World Bank executive director, was appointed in 2015 and his tenure was due to end in 2023. The main opposition leader Hakainde Hichilema has called his sacking “another sad development” in Zambia’s history.

The BBC’s Kennedy Gondwe in Lusaka says the governor’s appearance on local media, where he repeatedly warned about the dire state of the economy could have led to his sacking.

President Lungu is facing a tough election next year and he would want to dispel a narrative of a struggling economy, which could bolster support for the opposition, our reporter added.

Mr Mboweni has been a champion of the independence of central banks from political influence – that’s why he felt he had to speak up, he says.

Bitcoin has yet to recover from its unexplained weekend swoon, and now the investing public is on edge about the notoriously volatile token’s next move. Enter the chart watchers.

Noting that “a chart is a chart is a chart,” Tallbacken Capital Advisors’s Michael Purves sent a note Wednesday with a technical analysis of the coin’s trading patterns. Bitcoin’s recent highs weren’t confirmed by its relative strength index, among other things, and its upward momentum is fading, he said.

“From purely a technical perspective, the bullish case looks highly challenged here in the near term,” after its recent rally, wrote Purves, chief executive officer at the firm.

It’s another sign that Bitcoin has become too big for Wall Street to ignore. With more firms allowing customers to dabble in the asset and more institutional money tied to its performance, no wonder chart watchers are capitulating and now lending their expertise to the growing batch of analysis.

If the largest cryptocurrency isn’t able to break back above $60,000 soon, momentum signals will collapse, strategists led by Panigirtzoglou wrote in a note Tuesday. It’s likely traders including Commodity Trading Advisers (CTAs) and crypto funds were at least partly behind the buildup of long Bitcoin futures in recent weeks, as well as the unwind in past days, they said.

“Over the past few days Bitcoin futures markets experienced a steep liquidation in a similar fashion to the middle of last February, middle of last January or the end of last November,” the strategists said. “Momentum signals will naturally decay from here for several months, given their still elevated level.”

In those three previous instances, the overall flow impulse was strong enough to allow Bitcoin to quickly break out above the key thresholds, yielding further buildups in position by momentum traders, JPMorgan noted.

“Whether we see a repeat of those previous episodes in the current conjuncture remains to be seen,” the strategists said. The likelihood it will happen again seems lower because momentum decay seems more advanced and thus more difficult to reverse, they added. Flows into Bitcoin funds also appear weak, they said.

Bitcoin rose as high as $64,870 around the time of the Nasdaq listing of Coinbase Global Inc., but has retreated back to $55,000. The cryptocurrency is still up about 90% year-to-date.

The coin, down five of the last six sessions, is struggling to overtake its 50-day moving average around $56,819. For many chartists, that’s a bearish indicator since it tends to determine price momentum trends. Should Bitcoin be unable to breach its short-term trend line, it could move lower and test the $50,000 level, about a 10% decline from where it’s currently trading. The next area of support would be its 100-day moving average around $49,212. That would signify a 11% retreat from Wednesday’s trading levels.

Tallbacken’s Purves, who says the coin’s 2017 breakout and subsequent decline is a useful case study, also points Bitcoin’s daily MACD signal — or the moving average convergence divergence gauge — which has turned bearish in the intermediate-term. And its performance is still correlated to Cathie Wood’s uber-popular ARK Innovation ETF.

“Trading Bitcoin on the bullish side right now does not appear to have favorable risk-reward and if you have made profits, it seems like a good time to go to the sidelines for now,” Purves wrote.

To be sure, he said, it’s difficult to conclude how much further it could decline. Key to the issue will be how strongly institutional buyers step in. “While upside momentum is clearly looking challenged here, it is inconclusive how much downside risk remains,” he wrote in a note. “It is entirely possible that Bitcoin could simply consolidate in a range for some time.”

Bitcoin fell as much as 4.3% Wednesday to $54,341 before recouping some losses. Smaller and alternative coins that had run up in recent days also suffered declines Wednesday, with Dogecoin — the poster-child for crypto risk-taking — declining roughly 15% to trade around 31 cents. That’s down from a high of 42 cents the day prior, according to CoinMarketCap.com.

At least three people have been killed and nine others wounded in a powerful explosion in the parking area of an upscale hotel in the southwestern Pakistani city of Quetta, according to authorities.

Police said rescuers were transporting the victims of Wednesday’s blast at Serena Hotel to nearby hospitals. Footage on local news channels showed cars in flames.

Security forces rushed to the hotel and no one was allowed to approach the site of the explosion. Police said they had opened an investigation.

“Our officers are working to determine whether it was a bomb and what type of device it could be,” police official Nasir Malik told Reuters news agency.

According to senior police official Azhar Akram, some of the wounded were listed in critical condition. They were brought to Quetta’s main hospital.

No other information was immediately available.