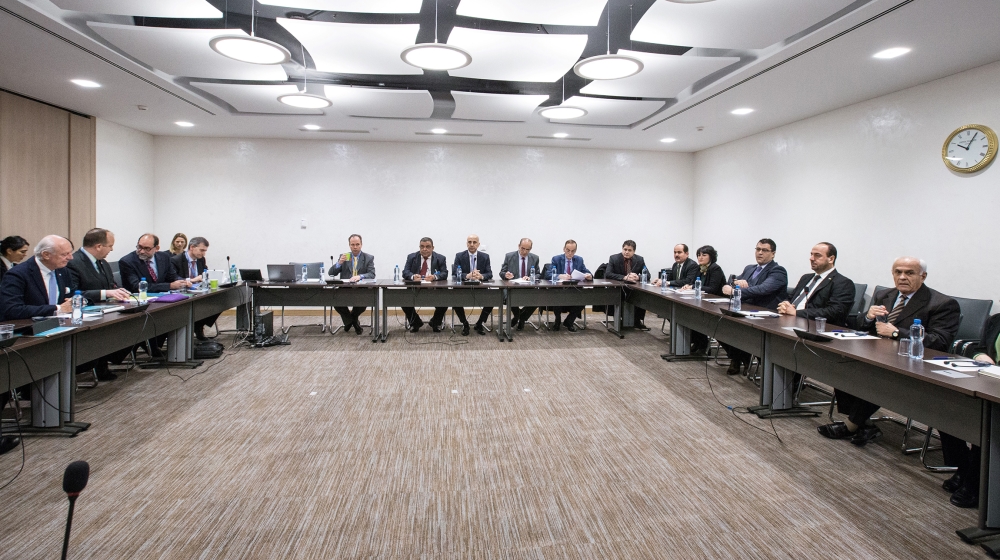 United Nations-mediated talks in Geneva involving the Syrian government, opposition and civil society have been put “on hold” after three participants tested positive for COVID-19, just hours after the meetings started for the first time in nine months.

The office of UN Special Envoy for Syria Geir Pedersen on Monday did not identify the affected members of the Syrian Constitutional Committee, tasked with amending the war-torn country’s constitution.

The full constitutional review committee is made up of 150 members divided equally three ways into government, opposition and civil society groups. But only 15 delegates from each of those groups were expected to take part in this week’s small-scale meeting.

“Following a constructive first meeting, the Third Session of the Constitutional Committee is currently on hold. The Office of the Special Envoy will make a further announcement in due course,” the office said, adding that Swiss authorities had been informed and contact-tracing was under way.

Syria’s warring sides were gearing up for a week of talks for the first time since a failed attempt in November last year. So far, they have made little progress in ending the country’s devastating nine-year conflict.

Earlier in the day, Ahmad al-Kuzbari, who is heading the government delegation, and Hadi al-Bahra, leading the opposition delegation, waved as they entered the building, but delegates did not speak to reporters.

Iran, Russia, Turkey and the United States – all stakeholders in Syria – were expected to be on the sidelines. The meeting is the first of its kind since the coronavirus pandemic derailed previous efforts at negotiations.

On Sunday, Pedersen said he had met co-chairs of the government and opposition delegations and with civil society representatives over the weekend.

“I am looking forward to a week of substantial discussions on the agenda and moving the process forward,” the Norwegian diplomat wrote on Twitter.

Ahead of the convening of the Syrian Constitutional Committee Monday in Geneva, I met w/the Co-Chairs & Middle Third, & I am looking forward to a week of substantial discussions on the agenda & moving the process forward.

The Constitutional Committee was created in September last year and first convened a month later.

The second round of talks, planned for late November, never got going after a disagreement on the agenda prevented government and opposition negotiators from the meeting.

Constitutional review is a central part of the UN’s peace plan for Syria, which was defined by Security Council resolution 2254, adopted in December 2015.

Pedersen on Friday stressed the urgent need to build confidence between the parties.

He told reporters nobody expected “a miracle or a breakthrough”; rather the meeting is about looking towards identifying areas where progress might be made.

Amendments to the current constitution that was passed in February 2012 by Syrian President Bashar al-Assad in response to the uprising the previous year has been at the core of the drafting group’s work.

At the time of the committee’s establishment, Joshua Landis, head of the Center for Middle East Studies at the University of Oklahoma, told Al Jazeera it was “hard to hold up much hope” for the committee’s viability.

“The Syrian government has put its foot down and said that only Syrians are going to decide the future of Syria … It has won the war so it’s unlikely to allow for outside powers and the UN to change the constitution very much,” Landis said.