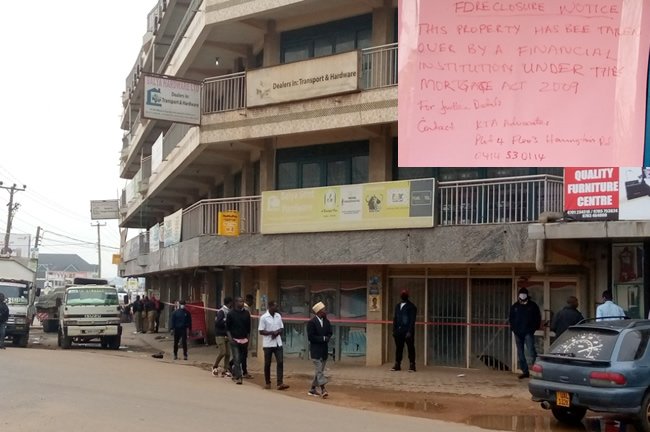 Mbarara City’s Balya Mall which is owned by the Chairman of Mbarara Investors Club Apollo Balya Muhumuza has been seized by Orient Bank over an unpaid loan.

The building which houses Balya Stint hardware and other businesses was over the weekend sealed off by court brokers.

The owner is said to have defaulted on a Shs 9Billion loan from Orient Bank.

According to the Bank lawyers of KT Advocates, the property located on Masaka Road was used to secure the loan extended to Balya Stint Hardware Ltd.

The lawyers say Balya has on many occasions been served with demand notices which he failed to respect.

“Upon failure to respect the notice, the property was subsequently advertised for sale on Friday, March 13th 2020 but he also didn’t reply,” the lawyers said.

While Banks in the country have recent been asked by President Yoweri Museveni to be lenient to defaulting customers, Orient Bank says Balya defaulted on the payments long before the Covid19 pandemic.

When contacted, Tycoon Balya promised to get back to us as he was in Kampala in a meeting.