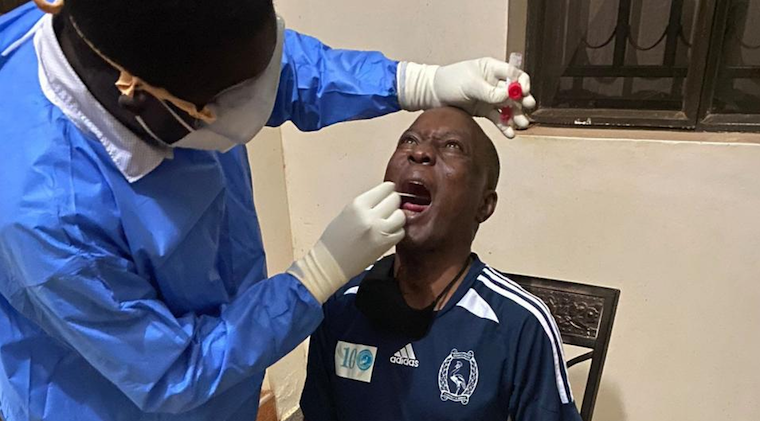 The chief political commissar of the Uganda Police Force, AIGP Asan Kasingye has tested positive for the coronavirus (COVID-19).

Kasingye is among the 97 Ugandans who tested positive from the samples tested yesterday, according to the latest update from the ministry of Health.

His tweet has attracted get well soon messages from his followers. On Friday, the surveillance team from Entebbe hospital collected throat and nasal swab samples from Kasingye from his home. He noted on Twitter that it was his second test in a space of two weeks. He added that he was taking the test as a personal decision to “prevent contagion.”

It was not immediately clear if he has been evacuated into isolation and how the police force. Meanwhile, police spokesperson Fred Enanga says that ministry of Health will have to send a formal statement on Kasingye before any further action is taken.

“He [Kasingye] made a personal statement. But we need formal communication from the Health ministry to confirm this information,” says Enanga.

The ministry of Health, as standard procedure, should evacuate Kasingye for isolation and management at one of the hospitals and his contacts will be traced and quarantined to curb the spread of COVID-19. However as with the New Vision journalist who tested positive, evacuation can take up to 3-4 days due to limited space in hospitals. Already the ministry has urged private hospitals to create isolation units for coronavirus patients.

The Health ministry indicates that the 97 new cases have been registered today, bringing the cumulative total confirmed cases of Ugandans to 2,263. These cases were all contacts and alerts from Kampala with 90 people, followed by Wakiso (59), Buikwe (11) and Amuru among other areas. Yesterday, Uganda recorded its daily highest coronavirus infections at 318. To date, at least 20 people have succumbed to the virus.

The ministry of health is urging the public to observe the preventive measures or numbers of infections will continue surging. Dr Jane Ruth Aceng noted that the numbers, especially deaths will increase if the public fails to observe measures such as hand washing, wearing of face masks, social distancing among others.

In a related development, the coronavirus death confirmed yesterday was of Wodega Gizamba, 49, a pastor at the Community Corner Stone church in Nkoma Ward, Mbale City. He died on Wednesday at Mbale regional referral hospital.

According to Dr Emmanuel Tugaineyo, the Mbale hospital director, Gizamba’s samples were picked shortly after he died and they were taken to Kampala where they turned positive. He said that the patient presented with signs of COVID-19 and symptoms which included difficulty in breathing among others.

Tugaineyo said that the hospital had been keeping the body since at the Mbale city morgue before burial was carried out on Saturday in Bugsege sub-county in Sironko district. However, relatives of the deceased have refuted claims by the medics, saying that their relative had hypertension which he could have died of but not coronavirus.

Charles Wogali, one of the relatives said the pastor has been complaining of hypertension for a long time. Wogali said he was surprised to be told by medics that he died of COVID-19. He wonders why some of the pastor’s family members have not been quarantined or their samples taken for testing.

Asad Gulaoba, the chairperson of Bujoloto cell says that the deceased has been his vice chairperson but every time they met in meetings he would complain of chest pain.

However, Edward Nyongesa, the Mbale district surveillance officer said that the underlying conditions of hypertension and diabetes are the ones that led to quick demise of the victim. He cautioned residents against such talk of thinking that COVID-19 doesn’t exist saying that the disease is now in the communities.

The death of Gizamba brings to two the number of victims who have died of COVID-19 in Mbale. Last week, another 60-year old Hamis Shafic, a resident of Budi B village in the former Namanyonyi sub-county in Mbale city was also reported to have died in Mbale hospital.

Elijah McClain: Activists call for change one year after death | US & Canada News