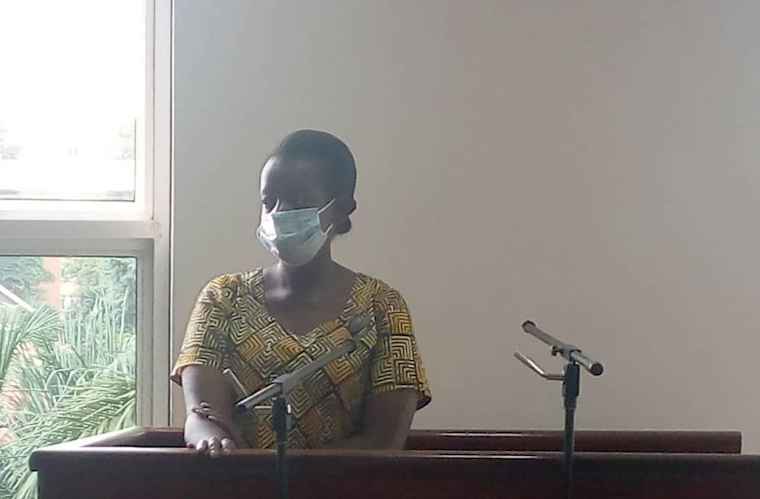 The Court of Appeal has upheld the 20-year jail term given to Jacqueline Uwera Nsenga for the murder of her late husband, Juvenal Nsenga in a disguised vehicle accident.

Justices Afonse Owiny-Dollo, Elizabeth Musoke and Cheborion Barishaki upheld the sentence in their verdict delivered this morning. Uwera, was in 2014 found guilty of killing her husband by running over him with a car on January 10, 2013, at their family home in Bugolobi, a Kampala suburb.

The then presiding judge Duncan Gaswaga ruled that based on the evidence presented before court, Nsenga could not have knocked her husband accidentally as claimed. According to the judge, prosecution proved beyond reasonable doubt that the accident which claimed Nsenga’s life was aforethought.

Through her lawyers led by David Mpanga, Nsenga told the Court of Appeal the lower court erred by relying on statements made by the deceased outside court.

She argued that court shouldn’t have relied on the dying declaration of Nsenga’s husband who uttered “my wife has killed me” to prove that there was intent of murder. He explained to the judges that the statement alone was not enough to cause intent, and Nsenga was convicted unlawfully.

She also faulted the lower court judge for having erred in law and fact when he failed to properly evaluate the evidence adduced at the trial and apply it to the offence of murder in as far it’s concerned in the Penal Code Act.

Mpanga thus asked court to quash the sentence and conviction arguing that it was based on circumstantial evidence. However, state prosecutor Elizabeth Namatovu opposed the appeal arguing that the Directorate of Public Prosecutions sole argument is that there was nothing like accidental acceleration when Nsenga was entering her matrimonial home.

The prosecution also maintained that Nsenga’s killer car was in a good mechanical condition since it’s the same car that was used to take the deceased to seek treatment in the hospital.

In their judgment read by the Court of Appeal registrar, Mary Babirye, the justices noted that after reading justice Gaswagga’s judgment, they found that he was alive to the law on the burden of standard of proof in criminal cases and as such rightly applied the law to arrive at his decision.

They also observed that justice Gaswagga took note of several aspects of the defense evidence such as the evidence from the scene of crime, mechanical condition of the car, which knocked the deceased, the bad relationship in their marriage, the evidence of threats uttered against the deceased by the convict and her strange conduct before, during and after committing the crime.

“After reading the judgment of the learned trial judge, we are unable to accept the criticism levelled by the counsel of the appellant that the trial judge shifted the burden of proof on the appellant. We, therefore, find no merit in ground three of the appeal as well”, said the judges.

They dismissed the appeal, saying that they had re-evaluted the evidence on court record and found that the conviction and sentence of Nsenga to 20 years in jail was proper. Nsenga who stood attentively in the dock in her African wear dress and surgical mask looked on as the registrar read the judgment.

It is unclear clear whether Nsenga who has returned to Luzira prison is going to proceed to the Supreme court to challenge the decision. Nsenga has so far served 7 years since she was convicted.

Uwera ran over Nsenga with her Toyota Mark X car on January 10, 2013, at about 9:45 pm when the latter came to open the home gate.

Court heard that the couple were living in separate bedrooms after a bitter quarrel when the deceased fell in love with Uwera’s niece, Loretta Mutoni. Mutoni had been living with the Nsengas until when she was ordered out of the home by Uwera after she became too close to her husband.

On finding Mutoni back in her marital home, Uwera told her husband “By the way I am capable of doing very many things that I myself am scared of the length I can go.”

Court was told the Uwera went ahead and executed her threat when she ran over her husband 12 days later after. Uwera told court that she regretted what happened but that it was purely an accident.

Related Topics:crimeUwera Nsenga
Up Next

More than 1,100 villagers killed in Nigeria this year: Amnesty | News