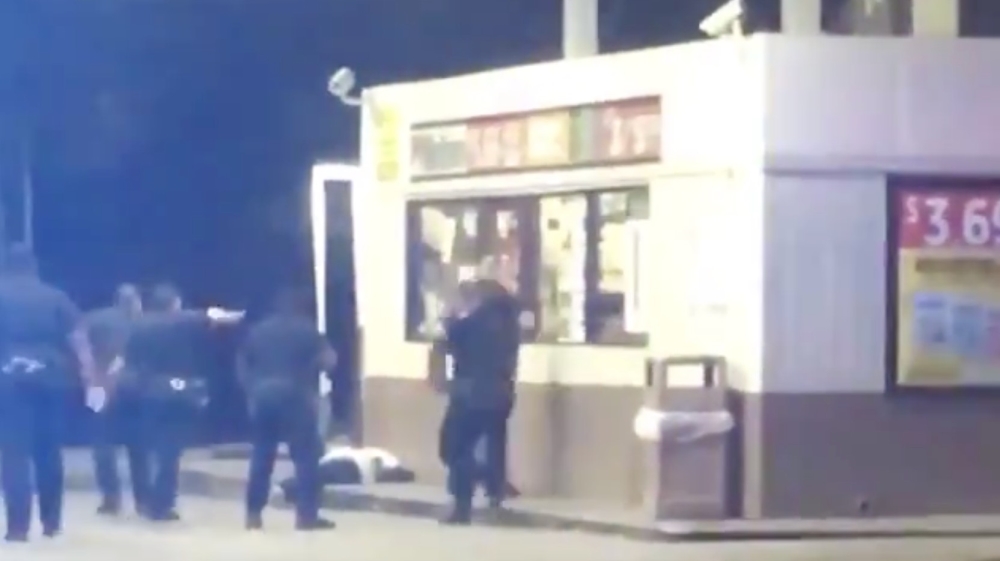 Community activists said they will present their frustrations and demand racial justice from the leaders of a Louisiana city on Sunday, following a night of violence that erupted after police shot and killed a Black man.

Dozens of people took to the streets of Lafayette on Saturday in response to the death of Trayford Pellerin, 31.

On Friday night, officers followed Pellerin on foot as he left a convenience store where he had created a disturbance with a knife, Louisiana State Police said. Stun guns failed to stop him, and the officers shot Pellerin as he tried to enter another convenience store, still with the knife, according to a news release.

The shooting was captured on video, and the state ACLU condemned what it described as an “horrific and deadly incident of police violence against a Black person”. Both the ACLU and the Southern Poverty Law Center quickly called for an investigation.

Rikasha Montgomery, who took a video of the shooting, said a man holding what looked like a knife kept walking down the highway while some officers fired stun guns at him [Screengrab/Twitter via Ben Crump]

Officials said at a news conference late on Saturday that fireworks had been shot at buildings and fires set in the median of a road where demonstrations had taken place.

“Our intent is not going to be to just let people disrupt our town and put our citizens and our motorists and our neighbourhoods in danger,” Interim Police Chief Scott Morgan said.

Arrests were made, Morgan said, but an exact number was not immediately available.

“We do support people’s First Amendment rights,” Lafayette Parish Sheriff Mark Garber said. “However, when it comes to the destruction of property, we are not going to have Lafayette set on fire.”

The activists attempted to attend the news conference but were “escorted out” because Lafayette Mayor-President Josh Guillory said it was private, Lafayette NAACP President Marja Broussard said. They planned to confront Guillory on Sunday at 5pm at Lafayette City Hall.

Activist Jamal Taylor said the demonstrators who caused destruction on Saturday night came from out of town.

“They picked the wrong city to do this in,” Taylor said. “If you’re one of these bad actors that comes in and sets fires and throws rocks and pops firecrackers, you’re not welcome here in Lafayette.”

The activists also expressed discontent that leaders did not offer condolences to Pellerin’s family at the news conference.

“Josh Guillory is lower than a dog for that,” Taylor said.

Tensions surrounding the fatal shooting follow a global reckoning over police tactics and racial injustice that stems from the death of George Floyd on May 25 under the knee of a white Minneapolis police officer.

National civil rights lawyer Ben Crump said he was representing Pellerin’s family, and that he and Baton Rouge lawyer Ronald Haley had begun their own investigation by interviewing witnesses.

“The officers involved should be fired immediately for their abhorrent and fatal actions,” Crump said in a statement on Saturday.

Pellerin’s mother said her son was intelligent, shy and had sought therapy for social anxiety. Pellerin became anxious in groups and may have been frightened by the officers, Michelle Pellerin told The Advocate. He had sought professional help earlier this year, she said.

The family believes Pellerin may have been having a mental health crisis, Crump said.

Rikasha Montgomery, who took a video of the shooting, told The Advertiser that a man holding what looked like a knife kept walking down the highway while some officers fired stun guns at him. Officers holding guns shouted at him to get onto the ground, said Montgomery, 18.

She said they fired when the man reached the door of a Shell gas station.

“When I heard the gunshots, I couldn’t hold my phone like I was first filming,” she said. “I feel kind of scared about it. I’m traumatised. You’re so used to hearing about this, but I never thought I would experience it.”

Haley told The Advocate that he and Crump will be seeking reform and policy changes in the police department as well as damages.

“We want policy changes as well, so that Ben and I are not in the living room with another family in Lafayette dealing with this,” Haley said.