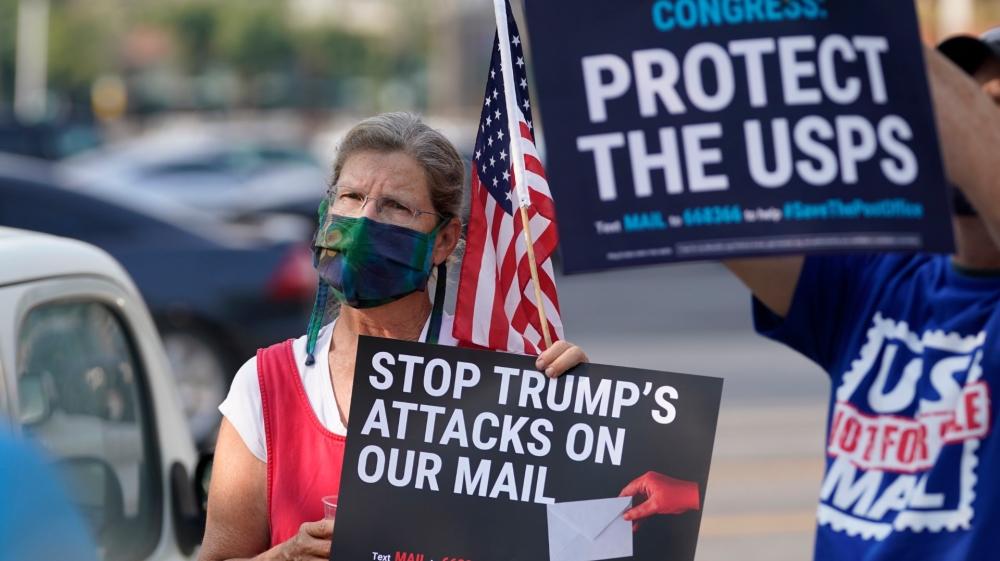 The Democratic-led US House of Representatives voted on Saturday to provide the cash-strapped Postal Service with $25bn and to block policy changes that have stirred concerns about mail-in voting in advance of the November 3 election.

The chamber passed the emergency bill, dubbed the “Delivering for America Act”, on Saturday during a rare Saturday session called by House Speaker Nancy Pelosi during the congressional August recess. The bill passed 257 to 150.

Twenty-six Republicans broke party ranks and voted for the bill.

The legislation would undo any recent changes to operations that may slow the Postal Service’s mail delivery, provide an infusion of cash for the agency to deal with the extra workload during the election and the continuing coronavirus outbreak, and require all ballots be treated as first-class mail.

It would also prevent Postmaster General Louis DeJoy from making any operational changes to the agency until after next January or the end of the coronavirus health emergency, whichever comes later.

The bill is unlikely to be taken up in the Republican-controlled Senate and the White House Office of Management and Budget said it strongly opposes the measure and would recommend President Donald Trump veto it.

Trump has repeatedly denounced mail-in voting, which is expected to surge due to the coronavirus pandemic, as a possible source of fraud, despite a dearth of evidence supporting that claim.

Democrats, meanwhile, have accused Trump of trying to undermine the Postal Service for political gain and DeJoy, a Trump donor who was selected to the position by a board of governors appointed by Trump, of making financial cuts and policy changes that will slow the delivery of mail-in ballots.

Last week, the Postal Service reportedly warned 46 of the 50 US states, as well as the District of Columbia, that mail-in ballots may not arrive in time under the states’ current deadlines for sending the ballots.

DeJoy has since suspended the financial cuts and assured a Senate committee on Friday that the Postal Service would deliver ballots “securely and on time”, however, he said he would not restore the already-made cuts to mailboxes and sorting equipment.

Democrats cast themselves in Saturday’s debate as defenders of a public that relies on the Postal Service for vital deliveries including prescription drugs.

Republicans, meanwhile, countered that complaints about mail delivery disruptions were overblown, and no emergency funding is currently needed.

“Do we need that money? Absolutely, no,” said Representative Tom Cole. “It’s a silly, silly bill.”

In a memo to House Republicans, party leaders derided the legislation as a postal “conspiracy theory” act.

While the bill is expected to languish in the Senate, Republican leader Mitch McConnell is eyeing a $10bn postal rescue as part of the next COVID-19 relief package. While Trump has said he wants to block emergency funding for the agency, the White House has said it would be open to more postal funding as part of a broader bill.

The Postal Service has been struggling financially under a decline in mail volume, COVID-19-related costs and a rare and cumbersome congressional requirement to fund in advance its retiree healthcare benefits.

Some have called for the agency to be run more like a private company, while defenders say the agency is a public service that should not be run as a money-making endeavour.

Why a Somali-born fighter is being honoured in Rome


Inquiry by Commonwealth War Graves Commission finds Black and Asian troops who fought for Empire were not properly memorialised.

As many as 350,000 Black and Asian service personnel who died fighting for the British Empire might not have been commemorated in the same way as their white comrades because of “pervasive racism”, a report has concluded.

The inquiry commissioned by the Commonwealth War Graves Commission (CWGC), in its report released on Thursday, says that between 45,000 and 54,000 individuals of predominantly Asian, Middle Eastern and African origin who died during World War I were commemorated “unequally”.

“A further 116,000 casualties [predominantly, but not exclusively, East African and Egyptian personnel] but potentially as many as 350,000, were not commemorated by name or possibly not commemorated at all,” the report said.

The @CWGC has today welcomed the report produced by a Special Committee formed to review historical cases of non-commemoration and are committed to implementing the Committee’s ten detailed recommendations in full. Read the full report and response, here: https://t.co/AMBwPTFhkZ pic.twitter.com/aBc7X3XoQt

The CWGC works to commemorate those from Commonwealth forces who were killed in the two world wars and to ensure all those killed are remembered in the same way, with their name engraved either on a headstone over an identified grave or on a memorial to the missing.

It issued an apology in the wake of the inquiry’s findings.

“The events of a century ago were wrong then and are wrong now,” said Claire Horton, head of the CWGC. “We recognise the wrongs of the past and are deeply sorry and will be acting immediately to correct them.”

The Unremembered investigation found that Africans killed in World War I had not been treated equally and revealed an example of a British governor saying: “The average native of the Gold Coast would not understand or appreciate a headstone.”

It also uncovered how African soldiers’ graves were abandoned in Tanzania, while European officers’ resting places continued to be maintained.

According to Thursday’s report, another officer, who later worked for the CWGC’s predecessor – the Imperial War Graves Commission, had said: “Most of the natives who died are of a semi-savage nature”, and concluded that erecting headstones would be a waste of public money.

The inquiry said decisions that led to the failure to commemorate the dead properly – or even at all – was the result of a lack of information, errors inherited from other organisations, and the opinions of colonial administrators.

“Underpinning all these decisions, however, were the entrenched prejudices, preconceptions and pervasive racism of contemporary imperial attitudes,” the report concluded.

The United Kingdom’s Secretary of Defence Ben Wallace was expected to address Parliament about the findings later on Thursday.

Lammy hailed the report as a “watershed moment”.

“No apology can ever make up for the indignity suffered by the Unremembered,” he tweeted.

“However, this apology does offer the opportunity for us as a nation to work through this ugly part of our history – and properly pay our respects to every soldier who has sacrificed their life for us … The arc of history is long but it bends towards the truth.”

One of the ‘Prima Facie’ principles of Medical Ethics is ‘Autonomy’. Autonomy includes confidentiality and privacy. Confidentiality means non-disclosure unless permitted by the patient.

Privacy means “having control over the extent, timing and circumstances of sharing oneself with others.” You cannot for instance, as a practitioner, order the patient to immediately dress down in the public area and to bend over so that you stick your fingers up their rectum when everyone is watching.

You need to give them ample time to organize themselves; to do the necessary ‘local’ preparations before they feel comfortable to be undressed; and to get a sufficiently private space.

One of the biggest dilemmas faced by a person who has received a diagnosis of a chronic disease is when, how much, and to whom to disclose. It’s not a simple pedestrian matter: It’s a real hassle – the publics always stigmatize everyone with a chronic disease however moderate it is.

The time it takes for people to process their medical situation and to decide to expose themselves varies widely between individuals and is based on the type of disease, their personality, sensitivities, the medical information they have, their values, their prognosis, and the desire to protect others close to them. Some people want to ‘wait and see’.

Being ‘Prima Facie’, ethical principles are inherently binding, unless they clash with another ethical principle in which case there is an ethical dilemma to be re-solved. There is no ethical dilemma here! Ethics is not freaking morals – leave your self-righteousness to yourself. Ethics is not freaking gut feelings; and neither is ethics about culture. Beliefs and morals die, ethics doesn’t.

I have seen many social media idlers blaming the Katikkiro for ‘not taking the pedestal several months ago to describe what was wrong with the Kabaka.

The Katikkiro cannot unilaterally issue a communique without the freaking permission of his boss! And none of the idlers has any evidence to show that his boss told him to announce and he categorically refused – don’t be publicly silly.

Secondly, people have no right to deny a diagnosis of ‘Allergies’ on the basis of pedestrian medicine. Patients are not examined in videos and diagnoses are not validated by rumors. Doctors are much more sophisticated than that.

Let his physicians be the ones to dissent, or let the Kabaka’s wife declare that what was said was wrong.

Severe allergic reactions and autoimmune diseases can be severe enough to cause anything, independently in their own right, without having to collaborate with social media witchery.

It’s so funny how social media has suddenly caused an upshot in ‘male rumor-mongers’ and ‘cyber-sorcerers’.

Good thing is that all of you will one day grow older and experience your own chronic diseases – then we will see if you can willingly stick out your private ‘parts’ in public whenever the publics demand so. Some of you cannot even tolerate a routine prostate exam and you are here asking others to undress?

The post OPINION: Leave Katikkiro Alone Until the Person Who Appointed Him Thinks Otherwise first appeared on ChimpReports.