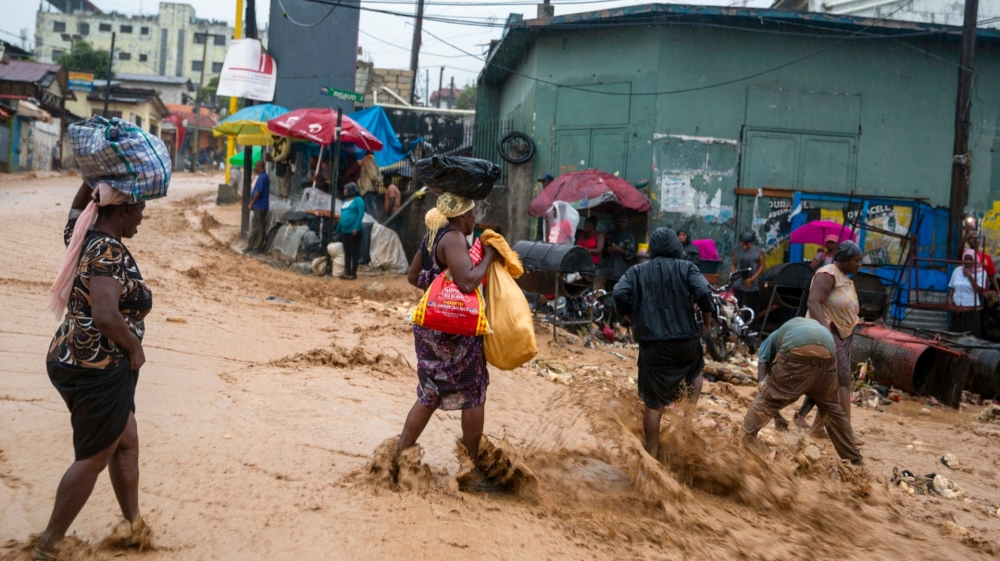 Marco, a storm travelling over the Gulf of Mexico has become a hurricane, while Tropical Storm Laura, which is on course to cross over the same body of water, has been deemed a potential hurricane threat.

On Sunday, Marco was upgraded as it cut a path towards the coast of Louisiana, which is was expected to hit on Monday. Laura, meanwhile, killed seven people at it passed over the Dominican Republic and Haiti.

Laura was on course to pass over Cuba before also hitting the Gulf Coast of the United States on Thursday.

In Port-au-Prince, Haiti, videos on social media showed people wading waist-deep in muddy water in some of the worst flooding the capital has seen in years. Haiti is especially vulnerable to intense rains due to weak infrastructure and deforestation which increases the likelihood of landslides.

Authorities called on residents along the Artibonite River to evacuate due to risks the Peligre Hydroelectric Dam might burst.

Haiti was also the first country to report a death – a 10-year-old girl who was killed when a tree fell on her home in the southern town of Anse-a-Pitres – from Tropical Storm Laura.

Meanwhile, in the Dominican Republic, at least three of the reported deaths were the result of walls collapsing, authorities said.

The storm left more than a million people in the Dominican Republic without electricity, forced more than a thousand to evacuate and caused several homes along the Isabela River to collapse, authorities said.

If Laura becomes a hurricane, it will be the first time recorded since at least 1900 that two hurricanes have formed in the Gulf of Mexico at the same time, according to Colorado State University hurricane researcher Phil Klotzbach.

Officials in the Florida Keys, which Laura might pass over on its route into the Gulf, declared a local state of emergency on Sunday and issued a mandatory evacuation order for anyone living on boats, in mobile homes and in campers. Tourists staying in hotels were warned to be aware of hazardous weather conditions and consider changing their plans starting from Sunday.

Meanwhile, the Federal Emergency Management Agency sent teams to emergency operations centres in state capitals in Louisiana and Texas, according to spokesman Earl Armstrong. The agency is prepared to handle back-to-back storms, he said, pointing to 2004 when four hurricanes took aim at Florida in six weeks.

Louisiana Governor John Bel Edwards, who declared a state of emergency on Friday, also asked President Donald Trump for a federal emergency declaration as people in the state headed to stores to stock up on food, water and other supplies.

On Sunday, officials in Louisiana’s coastal Lafourche Parish ordered a mandatory evacuation for residents of low-lying areas.  The US Coast Guard also raised its warning for the Port of New Orleans, calling for ships to make plans to evacuate some areas.

The potential for flooding and evacuations has further added to worries about the spread of COVID-19.

Tulane University, the largest private employer in New Orleans, said it will close its testing centre on Monday due to potential flooding and power outages, and called on students to maintain social distancing guidelines.