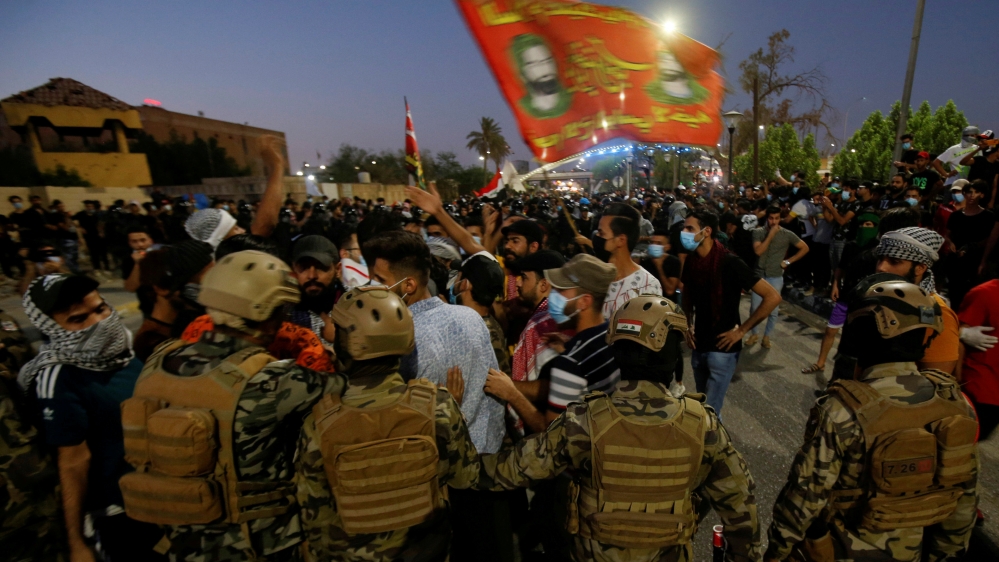 Southern Iraq’s Basra province is facing the prospect of renewed unrest after a deadline set by protesters for the departure of the local governor expired amid growing anger over the killing of prominent activists.

Demonstrators on Friday set fire to the parliament’s local offices in the city of Basra as security forces fired live rounds in the air to disperse them. They had gathered to demand the dismissal of Basra Governor Asaad al-Eidani after two activists were killed and others wounded in three separate attacks by unknown gunmen last week.

Iraqi Prime Minister Mustafa al-Kadhimi arrived in Basra late on Saturday in an attempt to quell the unrest, pledging to bring those accountable for the killings to justice.

“Basra will recover again, God willing. This is a message to all criminals and killers, this is a new government that is working to establish the prerequisites of security,” al-Khadimi told crowds in Basra.

“I’d like to tell everyone that carries a weapon contrary to the government’s law, they won’t escape punishment and the killers will be brought to justice very soon,” he added.

“I’d like to talk the criminals … your blood will be a title for justice.”

Activist Reham Yacoub, who had led several women’s marches in the past, was killed on Wednesday and three others were wounded when unidentified gunmen, brandishing assault rifles on  back of a motorcycle, opened fire on their car. A second female occupant of the car later died.

Days earlier, activist Tahseen Osama was killed by armed men. That killing prompted dozens of protesters to take to the street, and police responded by firing live rounds at them.

In response,al-Kadhimi had Basra’s chief of police sacked.

The recent rise in targeted killings poses a challenge for al-Kadhimi, who took office in May, becoming the third Iraqi head of government over the past year after months of deadly protests in the country demanding an overhaul of the country’s political system.

Al Jazeera’s Dorsa Jabari, reporting from Iraq’s capital, Baghdad, said protesters had initially given officials in Basra 72 hours to step down on Friday, but a day later they extended it to 13:00 GMT on Sunday.

“This all started because the number of activists that have been killed during the past two weeks,” Jabari said.

“This is something the local population has said is very worrying,” she said, noting that demands for accountability have been growing.

Iraq has witnessed a series of assassinations and forced disappearances of journalists and political activists, as well as the killing of hundreds of protesters since October 2019, the start of the demonstrations against corruption, political and security deterioration and the economic crisis.