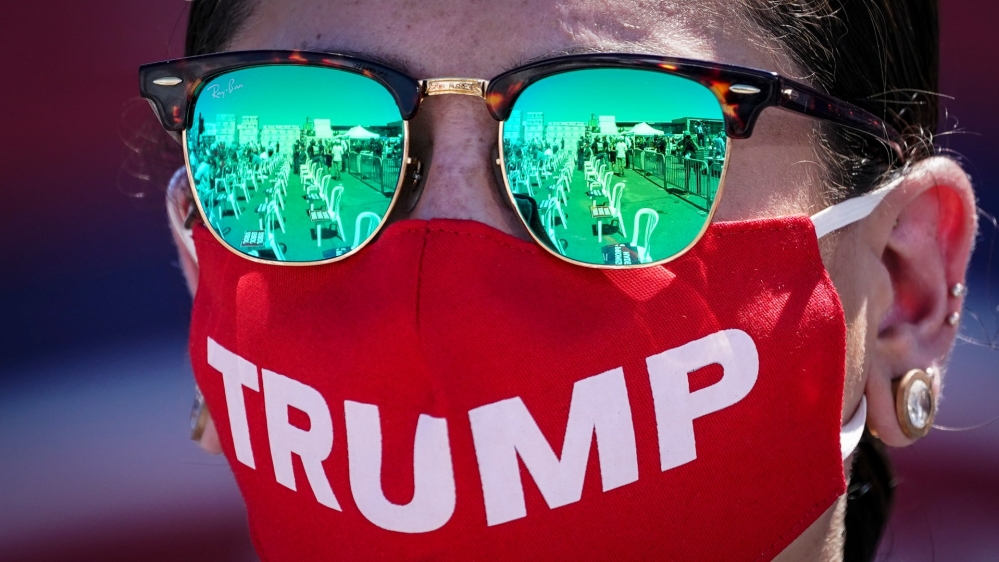 A hybrid four-day Republican National Convention is set to begin on Monday, in a part digital, part in-person event that will culminate in the official nomination of President Donald Trump as the party’s candidate.

The convention was initially set to take place as a full-force gathering in Charlotte, North Carolina, but large portions were moved to Jacksonville, Florida in June after a dispute over coronavirus restrictions with North Carolina’s governor.

In late July, the Florida portion of the convention was cancelled amid a surge in coronavirus cases in the state, and the party finally settled on a format that will mix in-person gatherings with live and pretaped programming that will make the case for four more years of Trump around the theme of “Honoring the Great American Story”.

Helping to pull off the multimedia event will reportedly be two former producers from the Trump’s former reality show, The Apprentice.

Trump, always one to buck tradition, will figure prominently in the four days of events, which organisers say will feature everyday Americans who testify that Trump has changed their lives in positive ways. Historically, presumptive candidates maintain a relatively low profile until their final night acceptance of the nomination.

The president is set to deliver that speech from the South Lawn of the White House, prompting a rebuke from some observers over his use of the presidential property for his campaign.

Speakers, including prominent Republican figures and individuals who have become party folk heroes in recent times, will make the case for Trump during the convention’s main programming from 8:30pm (00:30 GMT) to 11pm (03:00 GMT) each night.

The convention comes a week after Democratic opponent Joe Biden wrapped up his party’s convention with a promise to end what he called a “chapter of American darkness”.

Trump and Vice President Mike Pence have in recent days sought to draw a contrast to that convention’s messaging, which the president derided as the “gloomiest” in history. They have promised to instead offer a more positive take on the country that celebrates America’s “greatness”.

1 more day until we nominate @realDonaldTrump and @Mike_Pence for #FourMoreYears! Tune in tomorrow to watch the formal re-nomination!#RNC2020 #1day pic.twitter.com/8HLAa1NKlP

Pence has said the four-day convention will focus heavily on the economy, which had been strong before being devastated by the coronavirus pandemic, and law and order, amid weeks of Black Lives Matter protests that have persisted nightly in some cities.

He added that Republicans will seek to portray the Democratic Party as being overtaken by the “radical left”.

Themes of the convention

The convention will begin on Monday with an in-person roll call in Charlotte, in which 336 delegates – a far cry from the more than 2,400 who gathered for the 2016 convention – will officially cast their votes for Trump based on primary results in their respective states. The president faced little in the way of opposition during the primary season.

Event organisers and Trump campaign officials have said the convention will seek to portray the Republican party as the party of “real, hard-working Americans” and will focus on “the forgotten men and women of America”.

The four nightly themes are: “Land of Promise”, “Land of Opportunity”, “Land of Heroes”, and “Land of Greatness”.

Expected rank-and-file speakers will also drive home Republican talking points for this election cycle, which include a condemnation of so-called “cancel culture” and the accusation that the Democratic party has disregarded radical elements within the continuing racial justice protest movement that have posed a threat to public safety.

Donald Trump delivers his address during the final day of the 2016 Republican National Convention in Cleveland, Ohio [File: Michael Reynolds/EPA]

Speakers include Nicholas Sandmann, a Kentucky Catholic high school student who sued a media organisation for not providing proper context to a confrontation he had with a Native American activist at an anti-abortion Right to Life march in Washington, DC in 2019; Mark and Patricia McCloskey, a couple who brandished guns at BLM marchers outside of their St Louis home; and Police Sergeant Ann Dorn, widow of retired police captain David Dorn who was killed during violent protests in St Louis.

Trump’s family will also feature prominently during the events, with his daughters, Ivanka and Tiffany, and sons Trump Jr and Eric, as well as Eric’s wife Lara Trump, all slated to speak.

First Lady Melania Trump, who came to the US as an immigrant from Slovenia and rarely opens up about her personal life, is expected to make remarks from the White House’s iconic Rose Garden on Tuesday.

Meanwhile, Pence, who is important to bringing right-wing Christian voters to Trump’s banner, will give his speech accepting the party’s nomination in Baltimore on Wednesday. His wife, Karen Pence, will also speak.

The Democratic Party released figures on Friday that suggests it set a high bar for its event, raising $70 million during the four days and generating 122 million views on network and cable television as well as digital live streams.

Republicans last week launched a multi-million-dollar digital advertising campaign that targeted sites where the Democratic convention was likely to be streamed.

Democrats are planning nightly counter-programming during the Republican convention that will include nightly videos highlighting what they view as Trump’s biggest failures, according to the Washington Post.

Top Democratic officials will also give speeches each day and the party will set up a “war room” to respond to what it says will likely be rampant misinformation during the Republican event, the newspaper reported.

Small groups of protesters have also already started taking to the streets of Charlotte in the nights leading up to the convention. The demonstrations in the city are expected to continue throughout the week.

Opposition in Uganda: What is the End Game?