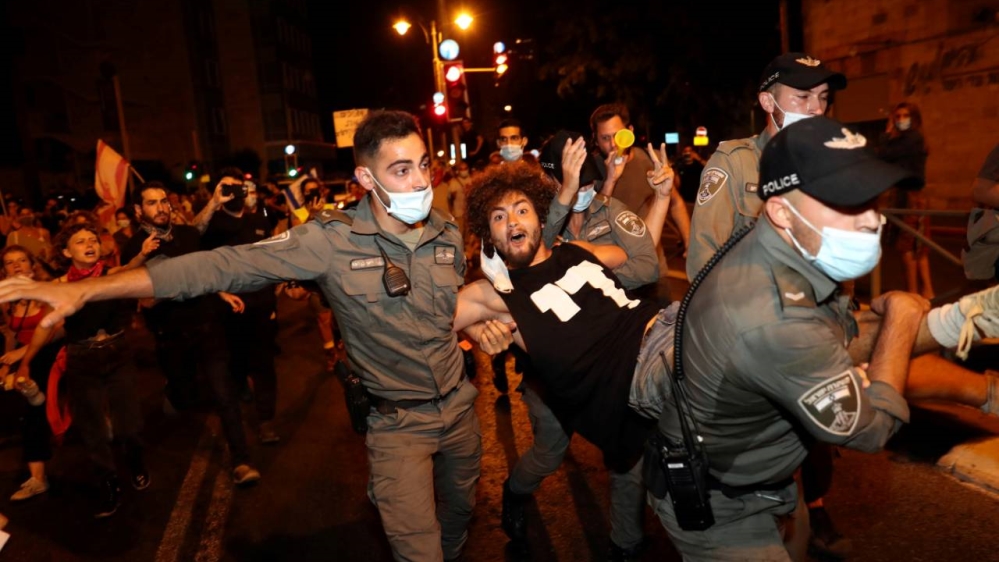 Thousands of Israelis continued to protest outside the prime minister’s official residence on Saturday as months-long demonstrations against Benjamin Netanyahu maintained their momentum.

The protesters want the embattled Netanyahu to give up his post while he is on trial for corruption charges. The government’s mishaps in handling the coronavirus crisis after relative success in its early stages have also driven the demonstrations.

Saturday’s protest comes in advance of Tuesday’s deadline in which the coalition government must agree on a budget plan or trigger new elections that would be the fourth in slightly more than a year.

Outside the residence, they hoisted giant balloons depicting smeared heads of Netanyahu and his rival-turned-coalition partner Benny Gantz of the centrist Blue and White party, waved Israeli flags and the black flag of one of the grassroots protest movements.

A sign read “Balfour is in our hands,” referring to the residence address. Other signs called on Netanyahu to quit and a placard described him as “Crime Minister.”

Last week, Netanyahu announced a US-brokered deal to normalise ties with the United Arab Emirates, making it the third Arab country to establish full relations with Israel. The historic breakthrough has not helped calm the demonstrations against him.

Netanyahu has rejected calls to step down while he is on trial and claimed the protests are the work of leftists and the media.

Israel appeared to contain the pandemic in its first phase, but the quick reopening of the economy led to a spike in cases.

More than 100,000 Israelis have tested positive for the virus. The country has also recorded 809 COVID-19 deaths among its population of nine million.

The pandemic has caused unemployment numbers to hover above 20 percent.

In January, the trial will move to a witness phase with three sessions a week.