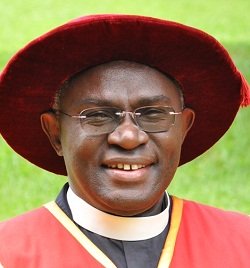 In a service held at St Paul’s Cathedral Namirembe on Sunday, the Archbishop of Church of Uganda, who is the fourth UCU Chancellor, the most Rev Dr Samuel Stephen Kazimba Mugalu appreciated the work done by Dr Ssenyonyi for 10 years he has been in the position of Vice Chancellorship.

“I want to give thanks to God for the Rev Canon Dr John Ssenyonyi and maama Canon Dr Ruth Ssenyonyi for the work they have done in Uganda Christian University (UCU). We are so grateful,” said Kazimba.

“The Vice Chancellors right from Prof Stephen Noll and Dr John Ssenyonyi, we are so grateful for the incoming Vice Chancellor Prof Aaron Mushengyezi. To God be the glory. I think Christians and others should really emulate this example whereby there is smooth transition of leadership,” Kazimba said.

The Archbishop also congratulated the outgoing University Council that has been chaired by the Bishop of Ankole Diocese Rt Rev Dr Sheldon Mwesigwa.

Dr Ssenyonyi who also happened to be the guest preacher said in his sermon that he was reluctant to join UCU when he was first called as a university chaplain in 2001.

“I was reluctant in the first place to go there as University chaplain in 2001 because I thought I already had a flourishing Ministry in Kampala with my brothers and sisters in African Evangelic Enterprise. And with my family, the children were in school, why would I ever go to an upstart University in Mukono. My Ministry was in many ways Africa wide if not international. So why should I go to Uganda Christian University? I was reluctant,” said Ssenyonyi.

He added that he later obeyed and took up the new ministry at Uganda’s best private institution of higher learning.

In the year 2003, Ssenyonyi would be approached to take up the responsibility as Deputy Vice Chancellor Finance and Adminstration.

“I remember telling Prof Noll, my predecessor, I came here to preach the gospel, I did not come here to do Administration but he persisted and I became the Deputy Vice Chancellor Finance and Administration,” Ssenyonyi recalled.

In 2009, the then UCU Vice Chancellor Prof Stephen Noll was leaving and going back to the United States.

Ssenyonyi said various people approached and advised him to apply for the position and replace Prof Noll.

“All my life, in all my career, I had never applied for a job. Now I am being asked to apply and become Vice Chancellor. But for and every one of those instances, God said go. I heard, I rose, I obeyed,” said Ssenyonyi.

Ssenyonyi has been UCU Vice Chancellor since September 2010.

The new Vice Chancellor, Dr Aaron Mushengyezi who had been the Dean Department of Languages, Literature and Communications at Makerere University was appointed on February 1st 2020 in Mityana at a meeting involving the House of Bishops of Church of Uganda.