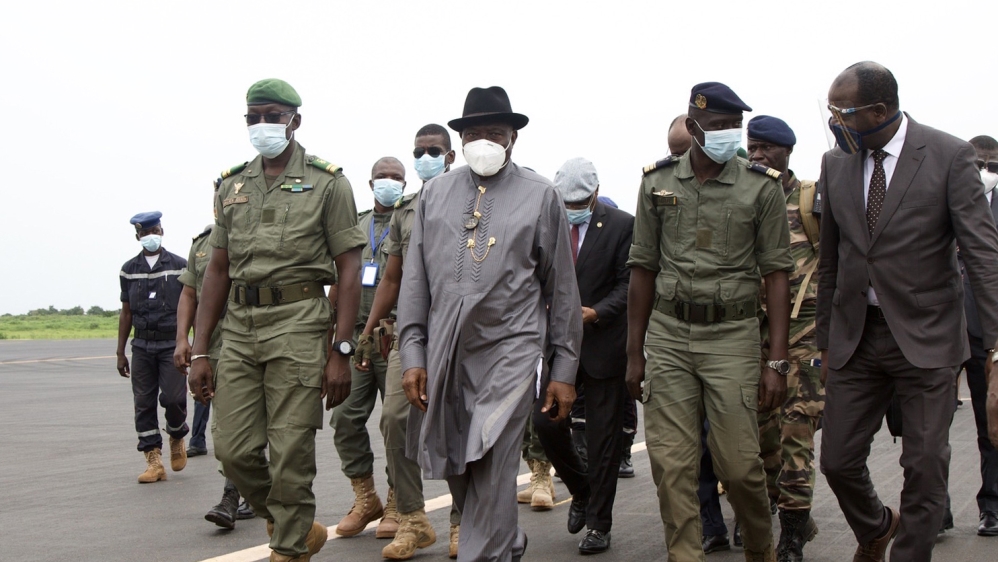 A delegation of West African leaders has arrived in Mali in a bid to push for a swift return to civilian rule following a military coup staged after weeks of anti-government protests.

Jubilant opposition supporters took to the streets of the capital, Bamako, on Tuesday to celebrate after military officers detained Ibrahim Boubacar Keita and other top government officials. But the coup was universally condemned abroad amid fears the unrest could plunge a country plagued by worsening insecurity into further instability.

ECOWAS, the West African regional bloc that led the chorus of international criticism, said on Thursday the high-level mission to Bamako will work “to ensure the immediate return of constitutional order” as it demanded Keita’s reinstatement following the resignation of the president and his government after the coup.

Led by former Nigerian President Goodluck Jonathan, the envoys on Saturday are due to hold talks with the coup leaders, including Colonel Assimi Goita, who has declared himself the group’s leader. The regional delegation will then meet Keita, former Prime Minister Boubou Cisse and other detained officials, according to the ECOWAS programme.

“As ECOWAS, we appreciate what is happening in Mali and ECOWAS wants the best for the country,” Jonathan told reporters after arriving in Bamako. “We are here to discuss with all the key stakeholders and I believe at the end of the day we can get something that’s a success for the people and is good for ECOWAS and good for our community.”

Following the coup, ECOWAS swiftly shut borders and ended financial flows this week – a move diplomats said was as much about warning opponents at home as stabilising Mali.

“They cannot tolerate this taking place. They are taking it very personally. It is on their doorstep and they think they are next,” one regional diplomat told Reuters news agency.

The regional bloc has also said it is mobilising a regional military force, an indication that it is preparing for a military intervention in case its negotiations with the coup leaders fail.

Adding to the international pressure, the United States on Friday suspended military aid to Mali, with no further training or support of the Mali armed forces.

But on Friday, Bamako’s central square exploded in celebration when thousands of people attended a rally that was originally organised as an anti-Keita protest by a protest movement that has led the mass rallies against him, but was recast to “celebrate the victory of the Malian people” in the wake of the coup.

A man holds a banner against the United Nations Multidimensional Integrated Stabilization Mission in Mali (MINUSMA) and Barkhane, an operation started on August 1, 2014, which is led by the French military against Islamist groups in Africa’s Sahel region, during a protest to support the Malian army and the National Committee for the Salvation of the People (CNSP) in Bamako, Mali [Annie Risemberg/AFP]

“I am overjoyed! We won,” said Mariam Cisse, 38, surrounded by people draped in the national flag and blasting on vuvuzela horns.

Speaking at the rally, Ismael Wague, spokesman for the group of coup leaders which calls itself the National Committee for the Salvation of the People, paid tribute to the public.

“We merely completed the work that you began and we recognise ourselves in your fight,” he said.

Al Jazeera’s Ahmed Idris, speaking from Nigeria’s capital, Abuja, said “the military authorities in Bamako can easily count on the support of these young men and women in Mali who have been protesting over the past few weeks”.

The coup leaders have said they welcome the ECOWAS visit but have not talked of restoring Keita to power. The military officers have promised to oversee a transition to elections within a “reasonable” amount of time.

“A transitional council, with a transitional president who is going to be either military or civilian” would be appointed, Wague told France 24 television on Thursday.

Keita, first elected in a 2013 landslide the year after a similar military coup, saw his popularity plummet after his 2018 re-election amid a rapidly deteriorating security situation in parts of the country where armed groups affiliated with al-Qaeda and ISIL are active.

Thousands of UN and French troops, along with soldiers from five Sahel countries, have been deployed to try to stem the bloodshed that has rendered vast swaths of Mali ungovernable and spilled into neighbouring countries including Burkina Faso and Niger.

Although dissatisfaction over the conflict, along with alleged corruption and Mali’s financial troubles, has been simmering for a while, the spark for the current crisis was a decision by the Constitutional Court in April to overturn the results of parliamentary polls for 31 seats, in a move that saw candidates with Keita’s party get re-elected.

Demonstrators under the umbrella of the so-called June 5 Movement began taking to the streets calling for Keita’s resignation. The protests turned violent in July when a crackdown by security forces during three days of unrest killed at least 14 protesters and bystanders, according to rights groups.

Keita, meanwhile, offered concessions and regional mediators intervened, but the opposition coalition made it clear it would accept nothing short of his departure.

The ECOWAS visit to Mali comes after the UN’s peacekeeping mission in the country said a human rights team had gained access to Keita and other detainees on Thursday.

While Keita and Cisse have no television, radio or phone, other detainees are in a training centre, where they are sleeping on mattresses and have a TV, according to witnesses to the visit.

Keita, 75, looked “tired but relaxed,” they said, describing his conditions as “acceptable”.