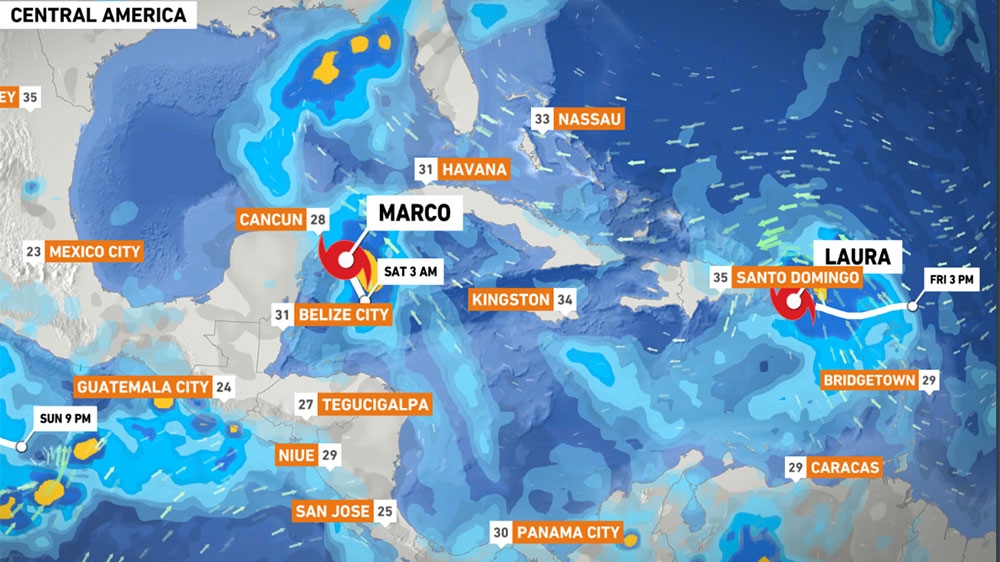 Tropical Storm Marco is making its way towards the Yucatan Peninsula after forming in the western Caribbean.

With winds approaching 65 kilometres per hour (40 miles per hour) – with much stronger gusts – it is expected to make landfall in the afternoon.

Torrential downpours are expected over the next 24 to 48 hours.

Marco will then move into the Gulf of Mexico and could be near hurricane strength by the time it approaches the coast of Texas on Tuesday.

Laura is forecast to move across the Virgin Islands on Friday and later move near or over Puerto Rico. The storm is then expected to move along the north coast of Hispaniola by the early hours of Sunday morning and on towards eastern Cuba.

Some parts could see 200-300mm (eight to 12 inches) of rain. These downpours could lead to flash or urban flooding. There will also be an increased risk of mudslides.

Laura currently has winds of approximately 75km/h (47mph) with stronger gusts and some strengthening likely over the next few days.

As Laura spins into the Gulf of Mexico, it could become a hurricane as it heads towards Louisiana around the middle of next week (one week shy of the 15th anniversary of Hurricane Katrina).

This year’s hyperactive Atlantic hurricane season is already smashing records and it could get worse.

Forecasters expect to run out of traditional hurricane names (in which case they will start using the Greek alphabet) and see about twice as much storm activity as a normal year.

On Thursday, the National Oceanic and Atmospheric Administration increased its seasonal forecast, now predicting a far-above-average 19-25 named storms. Seven to 11 of them are expected to become hurricanes and three to six of those to become major hurricanes with winds of at least 178km/h (111mph).

That is a few more storms than the agency’s May forecast. The agency increased the chance of an above-average hurricane season from 60 percent to 85 percent.

In a normal year, about 90 percent of storm activity comes after August 6, with mid-August to mid-October as peak season. So far this year, there have been nine named storms, with most setting a record for being early.

Besigye Knew He Stood No Chance Against Bobi Wine – Katuntu