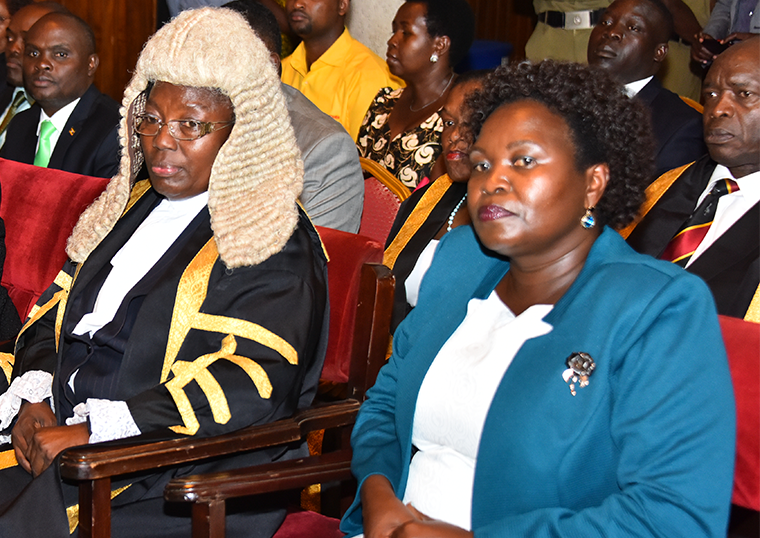 The speaker of parliament Rebecca Kadaga has said accused state agencies of harassing and blackmailing National Resistance Movement (NRM) supporters to vote against her in the just-concluded central executive committee elections.

Kadaga defeated state minister for Lands Persis Namuganza to retain her position as the second national vice chairperson (female) for the NRM-party during polls held on Thursday. Kadaga polled 6,776 votes against Namuganza’s 3,882 votes to retain her seat.

Namuganza had built her campaign on the ills that sailed through parliament against the ruling party under Kadaga’s stewardship, specifically riding on a displeasure motion against President Yoweri Museveni as one of the reasons Kadaga should be ejected from CEC. However, NRM spokesperson Emmanuel Dombo Lumala and vice-chairman Alhaji Moses Kigongo advised her against proceeding that way.

The campaign was complicated further when the government chief whip, Ruth Nankavirwa openly accused Kadaga of working with and for the opposition and using NRM for personal gain. Kadaga’s handlers, however, defended the speaker’s stance in parliament saying she depicts neutrality in a house that comprises of both government and opposition legislators.

In the aftermath of her victory, Kadaga took to social media and praised NRM voters for enduring intimidation from state agencies to vote for her, adding that she was particularly proud of the ministers and members of parliament who stood by her amidst threats by Ruth Nankabirwa.

Museveni reportedly unsuccessfully tried to talk Kadaga out of the race to leave Namuganza unopposed, with the speaker insisting that her fate should be decided by ballot.

“Am exceedingly grateful to the NRM members countrywide who campaigned and voted for me despite harassment and blackmail from state agencies. Am particularly proud of the ministers and members of parliament who stood by me amidst threats by Ruth Nankabirwa ,” she tweeted.

Kadaga has since deleted that particular message from her social media and instead replaced them with messages of reconciliation saying; “with the CEC elections now past us, let us move past politics of hate and blackmail and focus on that which will make our Party stronger and attractive to both the young and old. Long live NRM.”

Nankabirwa has said that it is not true that she threatened and harassed voters, but says she used the right to freedom of expression to campaign for a candidate she thought would work better in the CEC of NRM.

“I  didn’t threaten anybody and I did not move away from my constituency in Kiboga, I stayed at my home, how did I threaten anybody?  I want to hear her words towards reconciliation,” Nankabirwa said.

Nankabirwa’s role in parliament is to ensure that all government activities are coordinated. By her role, the speaker works hand in hand with the government chief whip to ensure effective execution of activities in parliament. In leaked messages from the NRM senior cadres WhatsApp forum, Nankabirwa has since been accused of playing immature and dirty politics against Kadaga.

She’d used the forum to call on NRM delegates to eject Kadaga out of CEC, accusing her of treating her like a toddler and making her beg so as to give NRM positions priority in parliament. She said, as the chief whip and NRM had been humiliated and embarrassed enough in parliament and it was high time to have Namuganza replace Kadaga on CEC.

But Kadaga answered back saying she is the reason why President Museveni is still in power. She said it was her who chaired chaotic parliament sessions that saw the lifting of the age limit from the constitution that removed the legal blockade that opened the way for Museveni to contest for another term.

Related Topics:Electionsrebecca kadaga
Up Next