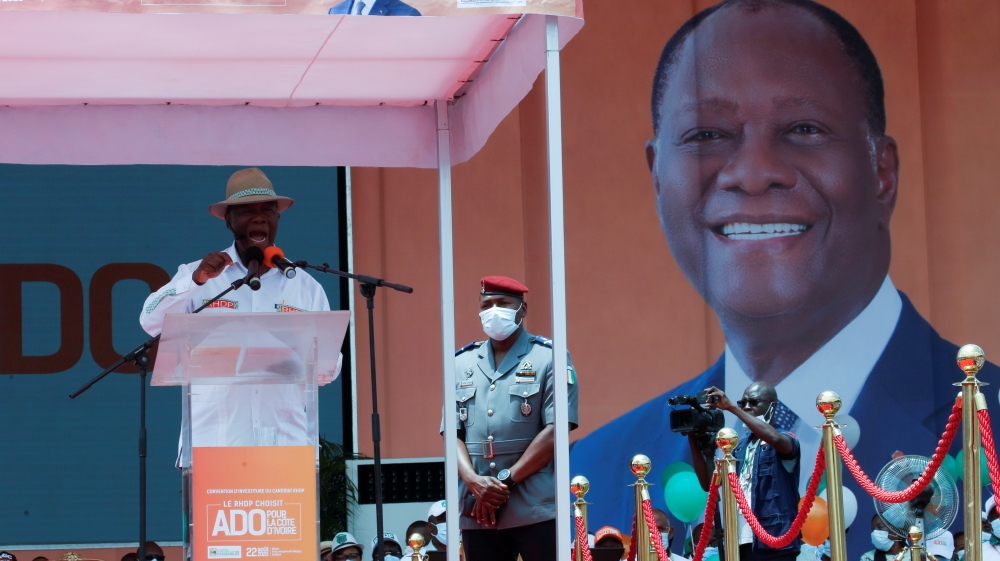 Ivory Coast’s governing party has formally selected President Alassane Ouattara to run for a third term in an October election, despite furious opposition allegations that the move violates the constitution.

Ouattara, who has governed since 2010, said in March he would not run again. But his preferred successor, then-Prime Minister Amadou Gon Coulibaly, died in July, leading the party to ask Ouattara to reconsider.

His opponents say the two-term limit in the constitution bars him from running again, but the 78-year-old and his supporters say a 2016 constitutional change clears the way for him to seek re-election.

Ouattara’s decision has triggered outrage among opposition and civil society groups, who labelled it a “coup” that risked triggering chaos.

After Ouattara’s re-election announcement earlier this month, mass protests descended into three days of violence in which six people died and 100 were wounded during clashes between opposition supporters and security forces.

On Saturday, the governing Rally of Houphouetists for Democracy and Peace party said Ouattara was nominated as its candidate at an event attended by 100,000 people in a stadium in the country’s commercial capital, Abidjan.

“We remain focused on the election, with a record to defend and a project to propose to Ivorians,” party spokesman Mamadou Toure told AFP news agency, branding the street demonstrations against Ouattara’s candidacy a “dismal failure”.

The government announced on Thursday it was banning all outdoor protests until September 13 in the wake of the deadly demonstrations this month.

Outtara’s change of heart has heightened tensions before the October 31 vote.

Ivory Coast, one of the world’s biggest producers of coffee and cocoa, is still traumatised by a brief civil war that erupted after elections in 2010, when the then-President, Laurent Gbagbo, refused to cede to the victor, Ouattara.

On Friday, election authorities rejected appeals by Gbagbo and former rebel leader Guillaume Soro to be allowed to run in the election.

The two men had appealed to the Independent Electoral Commission (CEI) against a decision to not include them in electoral lists for the ballot.

Gbagbo was freed conditionally by the International Criminal Court (ICC) after he was cleared in 2019 of crimes against humanity over the 2010 election unrest. He resides in Belgium.

His return to Ivory Coast would be sensitive before the presidential election. His Ivorian Popular Front (FPI) party urged him to throw his hat in the electoral ring.

Soro, a former rebel leader, has been forced into self-imposed exile in France in the face of a long list of legal problems at home.

He was a leader in a 2002 revolt that sliced the former French colony into the rebel-held north and the government-controlled south and triggered years of unrest.

Soro was once an ally of Ouattara, helping him to power during the post-election crisis in 2010 but the two eventually fell out.

Related Topics:AfricaIvory Coast
Up Next