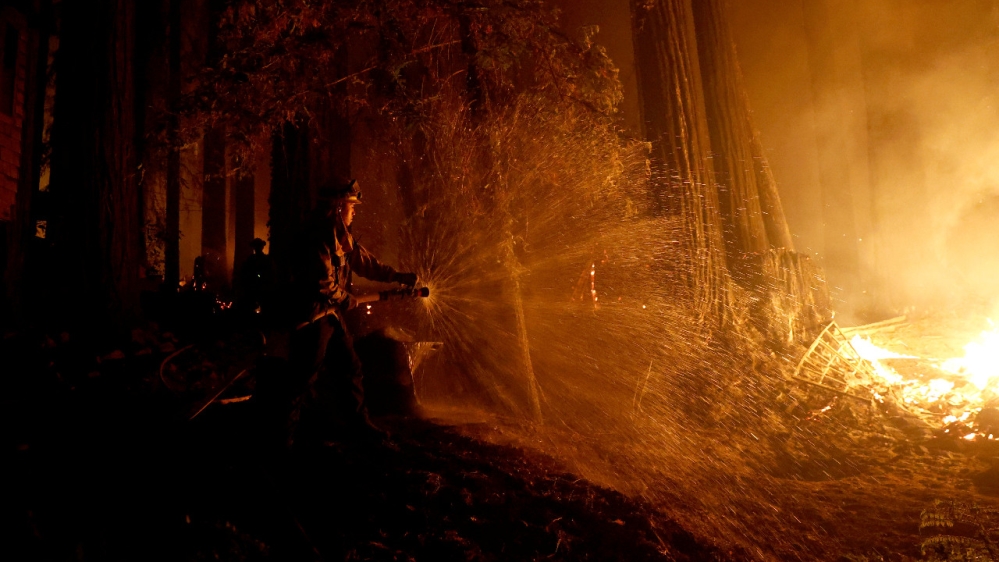 California’s lightning-sparked wildfires more than doubled in size into some of the largest in state history on Friday, with one blaze advancing to within a mile of the University of California, Santa Cruz (USCS).

At least six people have died, 43 firefighters and civilians have been injured, and more than 500 homes and other structures destroyed as fires have burned an area larger than the United States state of Rhode Island.

Firefighting forces were depleted as they fought around 560 blazes. Only 45 of 375 out-of-state fire crews requested by California had arrived, said a spokeswoman for the California Department of Forestry and Fire Protection (Cal Fire).

The state has been hit by its worst dry-lightning storms in nearly two decades. Close to 12,000 strikes have sent fires racing through lands parched by record-breaking heat, forcing 175,000 to evacuate their homes, largely in Northern California.

The lightning strikes, driven by record temperatures, were a consequence of climate change and more such storms are expected on Sunday, Governor Gavin Newsom told a Friday news conference.

“If you are in denial about climate change come to California,” Newsom told the Democratic National Convention on Thursday night. One of the hottest air temperatures recorded anywhere on the planet in at least a century, and possibly ever, was reached last weekend at Death Valley in California’s Mojave Desert, where it soared to  54.4 Celsius (130 Fahrenheit).

Most of the fires are in the San Francisco Bay Area, with a complex of blazes east of Palo Alto and another in wine country south of Sacramento now the seventh and tenth largest in state history, respectively, according to Cal Fire.

In Santa Cruz, a city of around 65,000, residents were told to have evacuation ‘go bags’ at the ready. Bulldozers dug fire lines on the northern flank of the UCSC campus, around 4.8km (3 miles) northwest of the coastal city’s boardwalk.

Videos showed giant redwood trees, some over 2,000 years old, standing largely unscathed among the torched ruins of buildings in California’s oldest state park to the north.

“The fire continues to advance, and much of what will happen next depends on weather conditions such as wind direction and speed,” UCSC Chancellor Cynthia Larive wrote in a tweet, after ordering the evacuation of the campus.

With up to 20 separate blazes burning in some lightning-fire complexes, overwhelmed firefighters pleaded for more support.

“We’re still understaffed for a fire of this size,” said Daniel Potter, a Cal Fire spokesman, in reference to the Santa Cruz blaze.

In the North Bay Area, four people died in a cluster of fires that have destroyed over 480 homes and structures in wine counties such as Napa, Solano and Sonoma, Cal Fire reported.

A utility crewman died on Wednesday while on duty helping clear electrical hazards for first responders at the same fire, dubbed the LNU Complex.

Earlier that day, the pilot of a firefighting helicopter contracted by the state was killed in a crash in Fresno County.

A burning home is seen along Cherry Glen Road during the LNU Lighting Complex Fire on the outskirts of Vacaville, California, the US [Stephen Lam/Reuters]

“All our first responders are working to the ragged edge of everything they have,” said California State Assemblymember Jim Wood.

The largest fire, known as the SCU Complex, east of Palo Alto, more than doubled in size from Thursday to around 93078 hectares (230,000 acres), an area approaching the size of New York City.