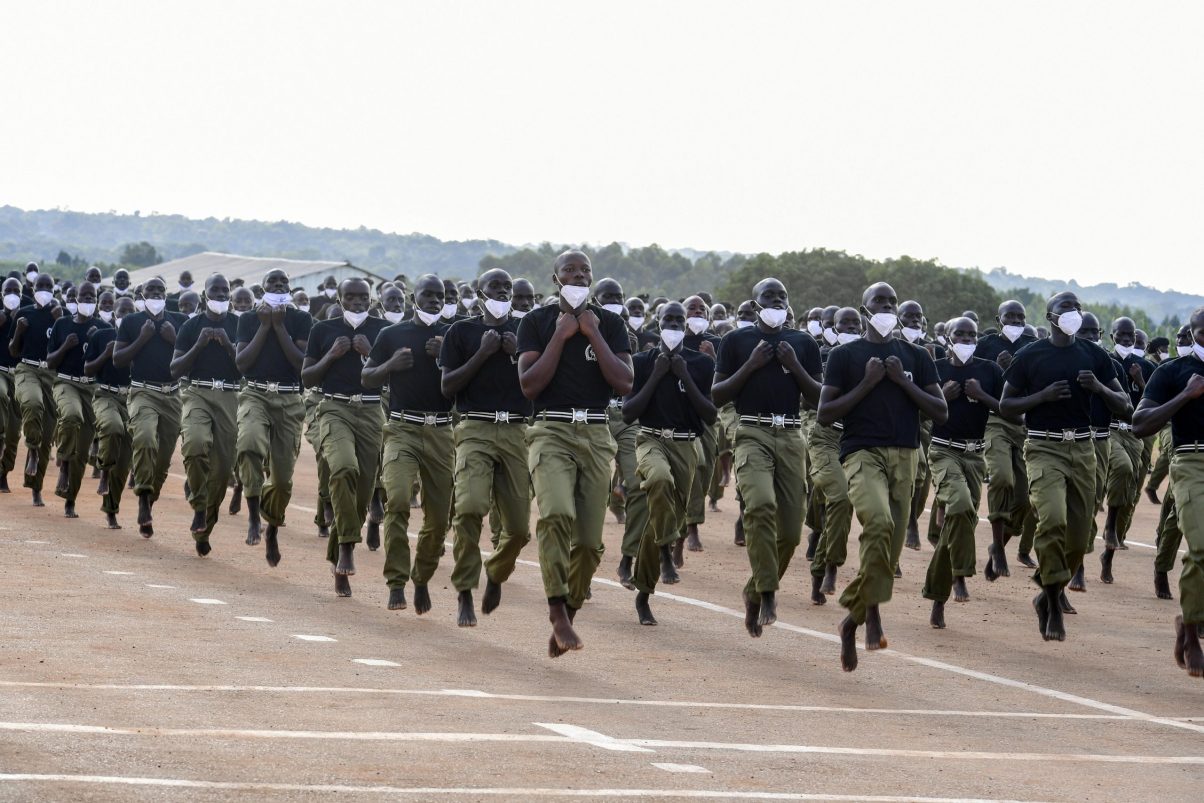 On arrival at the training School, President Museveni was received by the Commandant of Police Training School, Kabalye ACP Ziwedde Abubaker who briefed him about the courses conducted that included Learner Assistant Inspectors of Police (L/AIP) and Probationary Police Constables (PPCs) course respectively.

He was later taken through both theory and practical demonstrations that included a terrain model, public order management model and range exercise among others.

“It is now my pleasure to pass out the 485 Assistant Inspectors of Police and the 4324 Police Constables” Gen. Museveni announced amidst jubilations from the graduates.

Speaking shortly after the pass out, President Yoweri Kaguta Museveni congratulated the graduates upon finishing the course and joining the Uganda Police Force.

According to the doctrine and ideology of the National Resistance Movement party (NRM), the President said, Uganda Police Force should be a pro-people force, which is there to defend and uphold the dignity of Uganda.

“Your methods should reflect that. When you are beating people, then you are not a pro-people force,” he said.

President Museveni said that the police must be well trained in the use of arms and other means like martial arts and added that such capabilities should be used according to the standing order of the force.

“You the police should be firm in self-defense and use enough or reasonable force to subdue the criminal. After subduing, you should not again continue to beat them. Your job is to arrest, get evidence and take to court. It’s somebody else’s responsibility to prosecute not you,” he cautioned.

The President warned the police against shouting at people but should instead treat them with respect.

“Don’t be rude to people, don’t beat somebody who has already been arrested. That’s what I mean by a pro-people force,” he said.

The other weakness in police, the President said, is corruption. He revealed that many police officers have been taking bribes especially the traffic police whom he referred to as “The white angles”. He cautioned them not to try to get rich quickly by taking bribes and warned them against soiling the image of the police.

“There is no need for you to spoil the image of police. Don’t become bad mathematicians; don’t try to get rich quickly by taking bribes. You can do very well by being honest,” he cautioned.

When dealing with crime, the President said, police should be very serious and that’s the only way they will win the confidence of the people by being masters of crime prevention and good managers.

“We have played our part by purchasing security cameras to make your work easy. Please use them seriously to cab crime in society. We shall give you all the necessary support you need,” he said.

The Inspector General of Police Martins Okoth Ochola, who also congratulated the graduates upon successfully completing the course, said that the President’s endless support and guidance is a strong testimony to building a strong Uganda Police Force.

He told the graduates that policing is a rewarding career but for only the officers who are patient, focused.

“You have joined a noble career. Please be disciplined, patient, and focused. The country has invested in you a lot, so please do your work diligently and keep safe,” IGP Ochola said.

Related Topics:Museveninewsug police
Up Next