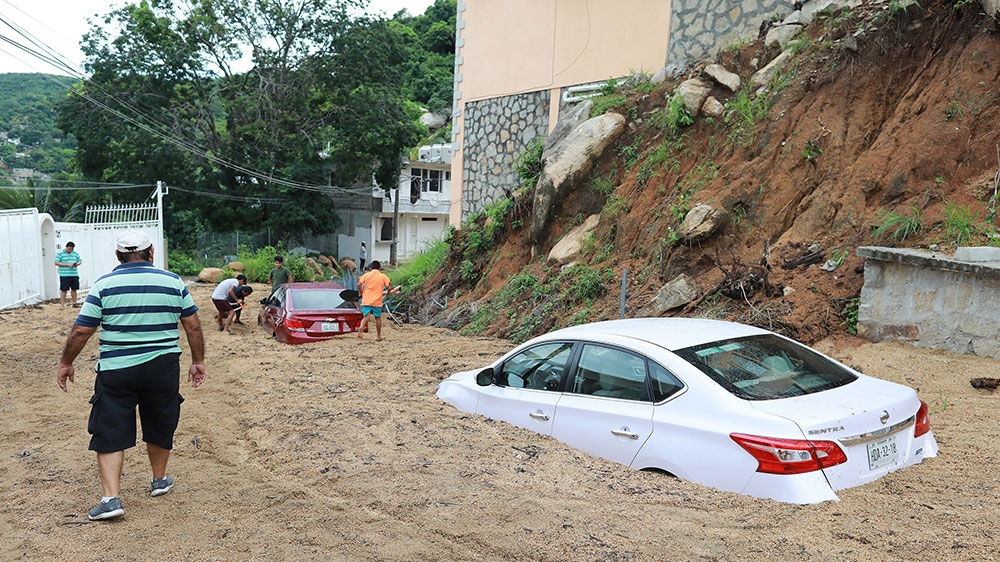 Hurricane Genevieve weakened into a Category 1 storm off Mexico’s Baja California Peninsula, US forecasters have said, after bringing rain and high waves to the country’s northwest coast.

Mexican authorities said on Tuesday two people, including a lifeguard, drowned at the resort of Los Cabos after a teenager ignored warning flags and was swept away.

The Miami-based National Hurricane Center said the storm, which had strengthened into Category 4 on Tuesday, moved close to Baja California without making landfall.

Genevieve’s maximum sustained winds had eased down to 150 kilometres per hour (90 miles per hour), it said, downgrading it to the weakest of five categories on the Saffir-Simpson scale.

However, strong winds, heavy rains, and “life-threatening flooding” were still a danger, the centre warned.

The system, which is now located 210km (130 miles) west-southwest of Mexico’s Cabo San Larazo, has now been downgraded to a tropical storm.

It is expected to weaken further as it moves out into the open waters of the eastern Pacific. It will become a tropical depression on Friday evening and a remnant low by Saturday.

Tropical Depression 14 is in the western Caribbean and moving close to the coasts of Honduras and Nicaragua. It has the potential to become a tropical storm by Saturday morning.

It is then forecast to reach the eastern Yucatan coast in the afternoon before moving into the Gulf of Mexico, where it may strengthen into a hurricane early next week.

Meanwhile, a tropical storm watch has also been issued for the northern Leeward Islands, the Virgin Islands, Puerto Rico, and the Dominican Republic.

Tropical Depression 13 could also strengthen into a tropical storm by the early hours of Saturday as it heads towards the Florida Keys. If conditions allow, this too could become a hurricane next week in the Gulf of Mexico.

Fighting Malaria amidst Covid-19: Under the Net Campaign Awareness Activities