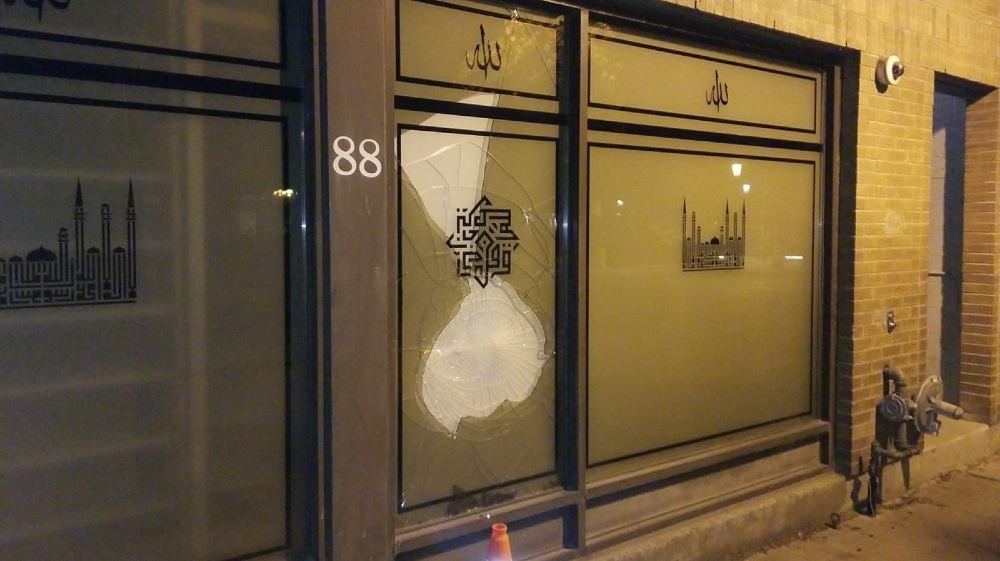 Toronto, Canada – The mosque in downtown Toronto that Hassam Munir, 25, visits weekly has been attacked by vandals numerous times in the past three months, most recently on Sunday, when its windows were found smashed again.

Although arrests have been made over the repeated attacks at the Masjid Toronto, which is part of the Muslim Association of Canada (MAC), Munir says he is still deeply concerned.

“It seems to be that someone is trying to intimidate the Muslim community. This is unacceptable,” Munir told Al Jazeera.

“I am worried, not only for those that work and pray here but also for what these kind of attacks tell us about the ignorance and hate that exists in our society.

“No Canadian should feel unsafe in their place of worship,” said Munir, who also works for the Yaqeen Institute for Islamic Research, which aims to break down Islamophobic narratives.

This week, the Masjid Toronto found its window broken for the third time in three weeks, making the incident – along with vandalism to another MAC mosque also located downtown – the sixth time local mosques have been attacked in three months.

In addition to the broken windows, there have been attempts to break into the mosques, and racist graffiti has been scrawled on the walls and windows, according to MAC.

“These incidents are now occurring at a frightening rate and we cannot accept to wait any longer for police action,” MAC said in a statement published on Sunday.

It added that local authorities should step up and offer the needed protection, noting that the attacks are meant to intimidate the Muslim community.

In an emailed statement to Al Jazeera, Toronto Police said they are “aware of several reports of mischief and damage since June 1” at the two mosques.

“Currently there are six investigations and two arrests have been made so far,” the statement said.

Masjid Toronto has been subject to a sixth attack in 3 months. We call on Interim @jamesramertps and @TPSOperations to address these attacks and further investigate these hate incidents and Islamophobic acts towards our community.https://t.co/fLV1Vr5Jsr pic.twitter.com/u453hcxQwB

“Our Hate Crime Unit has been made aware of the incidents and continue[s] to support the investigations as needed,” the police said, adding they will continue to work with members of the mosque.

But while arrests have been made in the last two instances, Mariam Manaa, MAC public relations manager, told Al Jazeera that MAC would like the case to be considered not as mischief, but as possibly hate related.

“[The case] was under mischief, not under vandalism or intention to hurt or hate,” Manaa told Al Jazeera, noting that the first four attacks have still not been solved to date.

“The issue with that is that within three to four days, they’ll be released again if they were apprehended and they can come back and again vandalise the mosque.

“We want further investigations and want police to take further action. We don’t want this to reoccur,” Manaa said.

Mustafa Farooq, CEO of the National Council of Canadian Muslims (NCCM), told Al Jazeera that the response by the Toronto Police Service (TPS) has so far been “insufficient” as there has been “no clear plan as to how these attacks will be prevented”.

“TPS has already ruled out hate as a motivation just days after the first arrest, and the attacks are continuing,” Farooq said.

“To us, six attacks in such a short period of time suggests a systematic pattern which is concerning and deserves further investigation.

“We’re urging TPS to fully investigate this as a potentially hate-motivated string of attacks and secondarily, to provide a clear plan so that no more attacks happen in downtown Toronto’s lot.”

According to MAC, the Masjid Toronto is one of the most-visited mosques in the greater Toronto area. Manaa said MAC is concerned for the safety of both congregates and pedestrians as well.

“It’s a very busy street,” Manaa said. “So I imagine throwing a brick into glass on a prominent street … other folks could be hurt.”

While there has been no conclusion about who or what is behind what has happened at Masjid Toronto, instances of Islamophobia have occured elsewhere in Canada.

In April during the Muslim holy month of Ramadan, a man drove to Al Rashid Mosque, the largest mosque in Edmonton, Alberta, surveilled worshippers and threatened to start a “Ramadan Bombathon” in a video while staking out the premises.

More than two weeks after his videos were posted to social media, the NCCM noted that the Edmonton Police Service had not charged him.

“The accused called for the death of [Prime Minister] Justin Trudeau and encouraged the eradication of Muslims,” the RCMP said in a statement.

Related Topics:CanadaIslamophobiaUS & Canada
Up Next

Mali: Five factors that made the coup more likely