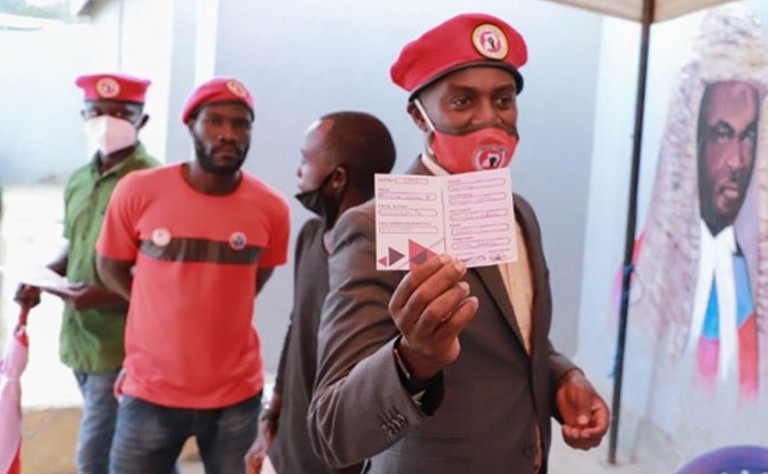 When celebrated senior journalist Andrew Mwenda picked up party membership forms at the National Unity Platform headquarters in Kamokya early this month, alot of people thought that perhaps the motor mouthed intellectual would change his narrative towards the opposition since he had eventfully become their own of course withstanding the hidden agenda that might have propagated his move.

However the recently concluded nationwide youth elections have seen the fire spitting media personality open up his venomous box of criticism unpologetically laying into the National Unity Platform for failing to establish vibrant  grass root structures that are necessary in amassing a critical mass of votes to topple the sitting government.

Despite crossing to the people power aligned party just two week ago Mwenda says that the opposition is so self immersed into their  egos and as a result failed to address their weakness in the rural areas something he believes has always stifled their growth.

The nationwide youths elections this week should give the opposition in Uganda, especially the National Unity Platform (NUP), time to pose and reflect. Just as polling had commenced, Timothy Kalyegira, a senior journalist in Uganda, tweeted saying NUP, less than two months old, were running “neck to neck” with the ruling NRM. Kalyegira, like many other elite Ugandans, has a habit of relying on his hopes to drive his analysis. And this is the fatal error that has stifled the growth of the opposition.

There is no doubt that NUP and its leader, musician turned politician, Hon. Robert Kyagulanyi aka Bobi Wine, enjoy large support and generate enthusiasm in Uganda. But this support is largely among the youths in urban areas in a country where 70% of the population are farmers in rural areas. Besides, being new, the party has not yet had time to go on the ground and establish organizational structures to allow it to mobilize people to its cause. Elections are both emotional and mechanical but it is the mechanical (possession of structures) that gives candidates a decisive advantage.

Let us look at these youth elections. Uganda has 68,740 villages. By the time I wrote this article, the Electoral Commission (EC) had tallied results from 59,923 villages (over 90%). The NRM had fielded 47,378 candidates nationwide; NUP came a distant second with 1,433 (3.3% of the candidates NRM fielded), FDC third with 1,133, UPC 537 and DP 536. Practically there was almost no contest between NUP and NRM in the just concluded youth elections. It is too thin on the ground to threaten NRM. Kalyegira would therefore not have made such an outrageous claim on NUP running “neck to neck” with NRM if he understood this reality.

Thus it was not surprising that when results came out, NRM had won 80% of the vote nationwide, NUP and FDC a miserable 2% each, UPC and DP 1% each while independents had won 15%. The issue of independents is even more significant for the opposition. Many Ugandans even at the lowest levels of local government prefer to run as independents than to associate themselves with opposition political parties. It is important to understand why.

Often, Ugandan elites prefer to sit and speculate, imagine and cook up explanations based on their prejudices and biases rather than on facts established through scientific methods like opinion surveys. The opposition in Uganda seem disinterested in winning over people. They know intuitively and through anecdotal evidence that there is widespread disaffection with President Yoweri Museveni’s long, corrupt and nepotistic rule. But they wrongly assume that all those who are dissatisfied with the status quo are enthusiastic supporters of the opposition. Wrong!

There are many Ugandans dissatisfied with Museveni who want change. However, when it comes to elections many of these people do not show up to vote for many reasons. Some are busy with their personal issues (tending to their gardens, shops, hair salons, barber shops, riding bikes, cooking, fetching water, gathering firewood, etc.,) while others are lazy, many apathetic believing that their vote won’t change anything, a belief Dr. Kizza Besigye had hammered home. The opposition in Uganda lack grassroots infrastructure to mobilize these supporters to go out and vote.

There is a second category of Ugandans dissatisfied with Museveni who do not see the opposition as a viable alternative. These are sometimes disgruntled Museveni supporters who need to be convinced to jump the NRM ship or fence sitters who need to be won over. But the opposition, armed with excessive self-righteousness, believe that whoever is dissatisfied with Museveni is automatically their voter. Big mistake. The fact that someone is unhappy in their marriage does not mean they will divorce. And even when they divorce, it does not necessarily mean they will accept the next person who comes telling them love stories.

I admit that elections in Uganda are neither free nor fair. The entire process is heavily tilted in favor of Museveni and the NRM who use the infrastructure and resources of the state to limit the space for the opposition. However, many opposition parties in Africa have faced similar or even worse conditions and still prevailed. Because they cannot alter the behavior of Museveni, the opposition need to focus more fixing their internal weaknesses.

Take the 2016 elections as an example. The country had 28,024 polling stations but FDC had polling agents in only 7,000. It is true that many of their agents were bought off by the NRM on polling day. But even that shows how disloyal their agents were. FDC had many polling agents across the country that could not be bribed and intimidated from their duty. That is the caliber of agents it needs.

To improve its organizational depth, the opposition in Uganda need to unite as a broad coalition. Yet the opposition continue to fragment. Take for instance the emergence of Bobi Wine (with NUP) as a strong opposition figure. NUP, a child of People Power, is an offshoot of Besigye’s Defiance and they share the same base and aspirations. Why then can’t NUP unite forces with FDC to gain better organizational depth? What are the ideological and policy differences that keep them apart – other than the personal and egotistical ambitions of Besigye and Bobi Wine?

Besides, the only way for the opposition to grow is to win the undecided and NRM fence sitters. And given Uganda’s social configuration (40 ethnic and linguistic groups and many religious groups), it is almost impossible to have one political party command a majority. The only way to build a majority is to form a broad coalition. And this is exactly what Museveni has done for his NRM – a large collection of powerful elites from the different ethnic, linguistic and religious groups of the country.

Museveni has achieved this through one of the largest patronage systems ever seen in Africa – 81 ministers, ambassadors, hundreds of presidential advisors, innumerable heads of government agencies etc. But it has also meant that he tolerates diversity of opinions in his camp. Yet the opposition in Uganda is consumed by a passionate desire for ideological purity among followers and total loyalty to individual party leaders so much so that even minor dissenters are treated as internal moles. The result is that the opposition are eating each other – NUP is cannibalizing DP and FDC without making any dent on NRM. More than Museveni’s machinations, it is these internal schisms killing the opposition.