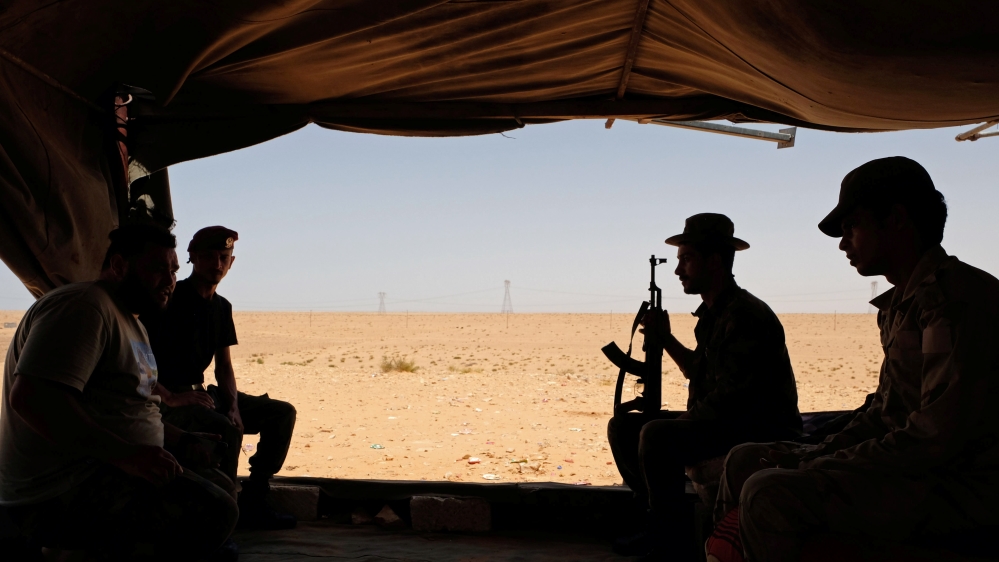 In Sirte’s municipal offices, walls are adorned with pictures of renegade military commander Khalifa Haftar, commander of the eastern-based self-styled Libyan National Army (LNA). Out in the desert, troops keep watch from behind sandbanks.

Already scarred by Libya’s 2011 uprising and a takeover by the ISIL (ISIS) armed group, Sirte now finds itself not only at the centre of a civil war but also a focus of geopolitical enmities that span the region.

Since Turkish intervention helped drive Haftar’s LNA back in early June from its 14-month offensive on the capital, Tripoli, the front lines have settled around Sirte, in the middle of Libya’s Mediterranean coast and close to major oil terminals.

“The city has seen wars and crises that have made people afraid,” said Adel Mohamed, a 43-year-old resident shopping in a local supermarket in the city of 90,000. “There is always anxiety about what is to come.”

Libya’s civil conflict pits the LNA and its allies against forces aligned with the internationally recognised Government of National Accord (GNA) in Tripoli, in the west.

As the GNA and Turkey looked ready to make further advances, Egypt declared Sirte a red line and pushed through parliamentary approval for possible military intervention.

In recent weeks, Libyan factions and their foreign backers have been mobilising as diplomats try to avert a military escalation and secure a ceasefire.

On a rare tour of LNA military positions, Reuters reporters saw troops stationed at positions southwest of Sirte, some sheltering under awnings or in tents, others manning watchpoints.

“Our armed forces are stationed around Sirte, even beyond Sirte. We are prepared,” said Miftah Shaqlouf, head of the LNA’s operations centre in the area.

“Our fingers must remain on the trigger until Libya is purified from mercenaries and colonisers, and from everyone who has greedily sought our land and its riches.”

During a visit to Tripoli this week, Germany’s foreign minister echoed a US call for a demilitarised zone around Sirte and al-Jufra, a military base to the south. He also warned of a “deceptive calm” with both sides and their allies continuing to arm themselves “on a massive scale”.

Foreign powers have been involved in Libya since the 2011 NATO-backed uprising that ended Muammar Gaddafi’s 42 years in power. But in recent months, the meddling has reached new levels.

While Turkey has considered using military bases in western Libya, the US has accused Russia of sending fighter jets and military supplies to help Russian private contractors.

Libya’s National Oil Corporation (NOC) has said the deployment of mercenaries has turned oil installations into “military posts”, and accused the United Arab Emirates – one of Haftar’s main backers – of upholding a blockade that for the last seven months has all but halted the oil production Libya depends on.

Russia has rejected US statements about its alleged military intervention, and the LNA denies it uses mercenaries.

“We have no one with us. No Russians … nothing,” said Shaqlouf, the LNA commander.

The UAE says it supports a diplomatic solution to the conflict and wants to see a return of Libya’s oil production as soon as possible but with safeguards in place.

UAE authorities did not immediately respond to a request for comment.

Sirte itself is still partly in ruins from the battles of 2016 when GNA forces pushed ISIL from the city where the group had set up its North African stronghold.

The seaside neighbourhood that saw the heaviest fighting lies in ruins, abandoned. Elsewhere, shops and cafes are open, and the city does not suffer the crippling power cuts of other regions thanks to a power station nearby.

Abdelaziz Abdelrahim, a 27-year-old butcher’s shop employee, said there were still cash shortages, but fewer than before the LNA took control of Sirte in January.

“More attacks on Sirte? We say God willing, no.”

‘I lost everything I did in my life’: Beirut explosion aftermath | Lebanon