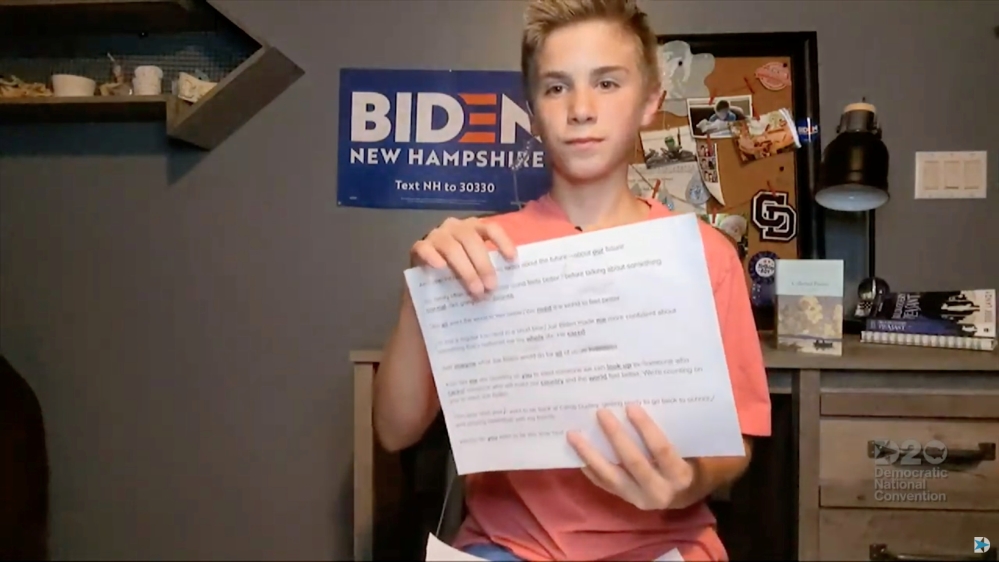 Even in a week filled with emotional endorsements of Joe Biden, Brayden Harrington’s stands out.

The 13-year-old boy sat in his home, speaking to a cellphone camera and reading, carefully, from a piece of paper.

He looked up and told the world how the former vice president, by speaking about his own experience, had helped him overcome a difficult challenge.

“We stutter,” Harrington said in a video that aired on Thursday, shortly before Biden accepted his party’s presidential nomination on the final night of the Democratic National Convention.

The Concord, New Hampshire, teen got stuck briefly on the “s” sound and bravely worked his way through the word. His face showed strain but also determination to force out the sound.

“It’s really amazing to hear that someone became vice president” despite stuttering, Harrington said. “He told me about a book of poems by Yeats that he would read out loud to practice.”

Biden has spoken frequently about how overcoming a stutter was one of the hardest things he has done in life. Harrington and Biden met at a February CNN town hall in Concord, where Biden spoke about overcoming a severe childhood stutter.

He has talked publicly through the years about the anger and frustration of being mocked by classmates and a nun in Catholic school – and how that motivated him to work to overcome it.

“It has nothing to do with your intellectual makeup,” he said at the town hall.

After the event, Biden invited Harrington backstage to talk more about learning to control a stutter. Biden noted he had practised by speaking as he looked at himself in the mirror.

He also gave the boy a speech he had prepared for delivery, complete with markings he had made on its pages that showed where he had time to take breaks and pauses so the words would come out more smoothly.

Harrington held up that speech for convention viewers on Thursday.

“I’m just trying to be a kid,” Harrington said. “And in a short amount of time, Joe Biden made me feel more confident about something that’s bothered me my whole life. Joe Biden cared. Imagine what he could do for all of us.”

“Kids like me are counting on you to elect someone we can all look up to,” he added.

Biden has talked about his stutter frequently on the presidential campaign trail and how it sometimes returns on certain words, especially if he is tired.

After he talked about it during a Democratic primary debate in December – and even started to make the sounds of a stutter – then-White House Press Secretary Sarah Sanders ridiculed Biden on Twitter.

The tweet was later deleted and Sanders apologised. Biden said afterwards he had no regrets “because I know what it’s like to be humiliated”.