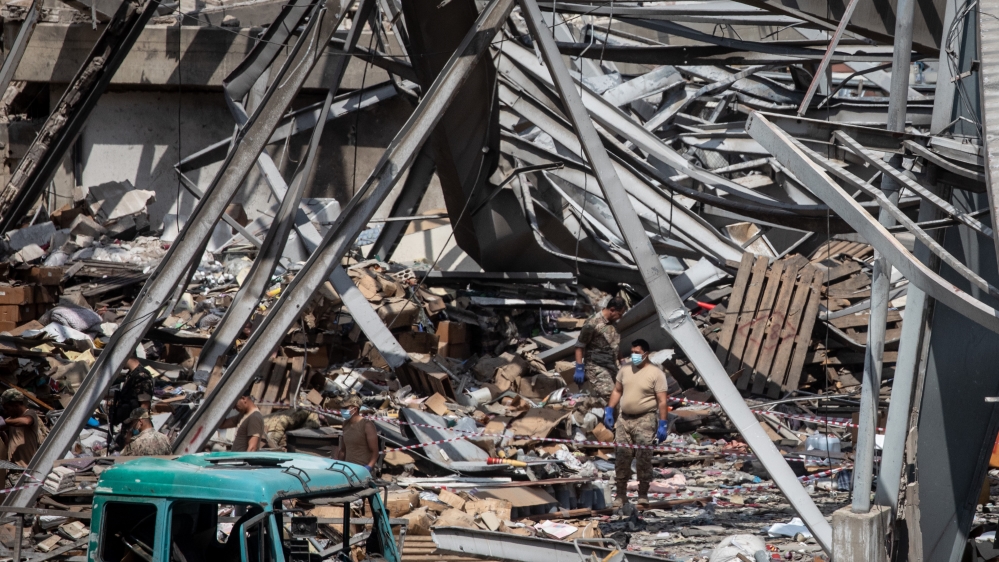 Beirut, Lebanon – “This is greater than anything ever before.”

It is not the first time I have heard this since we arrived in Beirut.

We are sitting with a government employee, his eyes are heavy, his usual, almost flirtatious energy, totally gone.

He looks tired. In fact, he looks completely broken.

He is broken. He tells us how, for the first time, he now wants his children to leave Lebanon – despite having put them through the best education to stay here. Nothing compared with this – not the years of civil war, assassinations, car bombs – this was different. It is different.

We have all been affected, he tells us. Family died, friends died, homes were blown up and businesses lost.

A sudden, violent blast that sucked the oxygen out of this city and its people.

It has left many gasping for air.

“It came into our homes and took our happiness, our souls,” another woman tells us. She lost her husband in the blast.

She was in the living room, he was in the kitchen. She still does not comprehend how she was unscathed, and he never made it.

“In a few seconds, I lost everything I did in my life, my house, my business. But all that can be fixed – but my love? For what? For nothing?”

The shops and restaurants are shuttered. Hamra, Mar Mikhail, Gemayzee – the few businesses that survived the economic crisis now blown to pieces.

A Lebanese friend, who had just returned after the explosion told me how depressed he was – he is of the civil war generation.

“Everything is gone – places, even people. There is nothing to be attached to any more.”

Many feel that way. They have lost family, friends, homes, businesses. Everyone has a story. Few people have much hope right now.

We visit a hospital where a forensic doctor has been busy identifying the bodies of those killed in the explosion. We discuss what state the bodies are in, what he has seen – how he feels.

“We were already struggling with corona,” he says, “and the economical situation, the political situation, too many things. This is very stressful for the Lebanese people – and then this explosion came.”

While we talk to him, bodies are carried back and forth behind us. One wrapped in black, one in white sheeting, and basic coffins.

Death hangs in the air.

He continues: “I think, until now, there is no real reaction. What you see is a stupor, people are still in stupor regarding their dead, regarding the country, regarding what is happening. And probably they are under stress syndrome, post-trauma stress syndrome – that will take some time, one year to appear.”

He tells us that usually when there is an explosion in Lebanon, people rush to hospital emergency rooms – mobbing them and they have to hire security to be able to do their jobs.

“Yes they came, of course – but they stayed outside by themselves. It’s as if they wanted to know the truth – but at the same time they didn’t.”

Denial or shock. The magnitude of what has happened here is difficult to comprehend.

Saleem is a diving instructor. He volunteered with the rescue in the early days. I ask him how he felt when he first approached the port from the sea, heading to look for survivors.

It was chaos in these early days – and the visibility in the crater was zero … They had to feel their way with their hands.

He contemplates the bigger picture. He, like many of his generation – fought in the civil war and is no stranger to violence, to death, to political chaos.

“What happened is very big.”

He too tells us that this is bigger than anything ever before.

“You know you have the capital of a country that is totally destroyed. I don’t know how many years we need. You know Lebanon is passing through an economical situation that is very hard. We have problems with the international bank, and we have problems with the exchange rate, and 60-70 percent of people are not working, nobody can eat, salaries are bad, we have to deal with corona, and we have the revolution. And now we have this?”

“Will Beirut recover?” I ask him.

“Yes, the buildings will recover. The people I don’t know. If they stay – maybe in like 20, 30, 40 years – because if you make a small calculation, nobody really recovered from the war of ’75 yet. If they are still living, and nobody recovered from the war of the ’80s and ’90s, and 2006. It’s hidden somewhere, you just need like a click and it will pop up. I don’t think it will be easy to recover. This is a big thing. It’s a big thing.”

‘I blame the whole state’

Feeding each other, providing shelter, patching up this shattered city. Any real official help on the ground has been notably absent.

We interview a family who is still waiting for news of their husband, their father, more than two weeks on. He worked at the silos and was in the operation room at the time of the blast.

After speaking to his wife and his son, we finish filming. I talk to his daughter. She is 19, so eloquent, smart, and beautiful.

I tell her how amazingly strong she is and how I do not think I would have been able to keep it together if it were me in this situation.

She tells me she used to think that she could not either, but it is different when it happens to you, she says. You find the strength.

Later that night, the family gets word that their father and husband was identified.

“I blame the whole state, I blame the politicians,” his wife told us earlier.

We attend the funeral. It is unbearably sad. His elderly mother strokes his coffin, her face creased in pain.

We can see a picture of him on her chest, held in place by her jacket. Close to her heart. No mother should have to bury their child.

His son wants an independent investigation, he wants answers.

He stands stoic but his eyes burn with pain, as his mother and sisters shake with grief.

Many here say they want answers, but in the same breath, they add they believe the truth of what happened will never come out.

Justice is another thing they question. Most people we speak to blame the entire system.

They say the explosion was the ultimate, incomprehensible symbol of decades of mismanagement, corruption and negligence – of power in the hands of a few – and admit it will be very difficult to change.