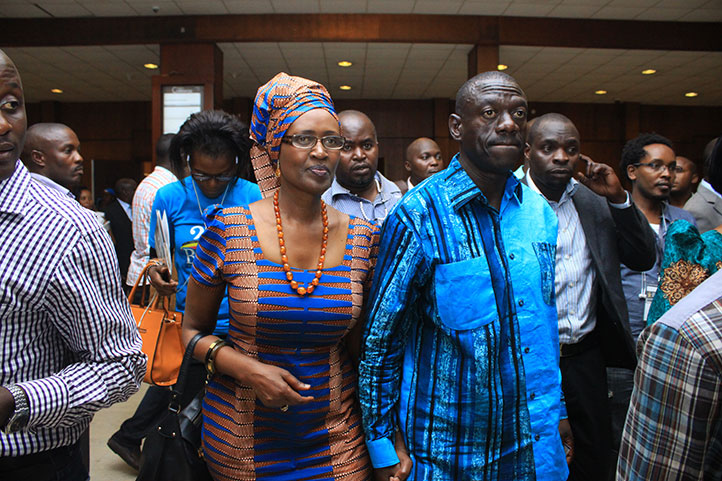 A group of senior Forum for Democratic Change (FDC) leaders are persuading Eng Winnie Byanyima to challenge President Museveni in the 2021 general elections.

The officials, led by party president, Patrick Amuriat, believe Byanyima, who is currently serving as Executive Director of UNAIDS, stands a better chance of defeating Museveni.

This was after Dr Besigye stepped out of the race, saying he would rally behind any candidate willing to “liberate Uganda.”

Besigye said the current Electoral Commission chaired by Justice Simon Byabakama is too partisan to deliver a free and fair election.

FDC officials who talked to ChimpReports said the wooing of Byanyima “has been on for the last two months.”

This group says Byanyima would easily win the hearts of women and the fence-sitters who have not been voting in the last three elections to support her against Museveni.

Byanyima, according to her supporters, would as well use her international network of friends and allies to raise resources and also exert pressure on the Electoral Commission to deliver a relatively free and fair election.

Efforts to obtain a response from Byanyima were still futile.

Asked to comment on this matter on Thursday at FDC headquarters in Najjanankumbi, Amuriat responded: “The Chairman of FDC EC (Toterebuka Bamwenda) is the best person to answer that question.”

But several insiders admitted that without Besigye on the ballot paper, Museveni would win with over 80 percent of the vote.

“Other presidential hopefuls such as Robert Kyagulanyi (Bobi Wine) and Mugisha Muntu lack the infrastructure, financial muscle and charisma to put up any serious challenge against Museveni,” said a high ranking FDC official who preferred anonymity to speak freely.

“That’s why we said, if Besigye is not returning, let’s us support Byanyima because she has a national appeal. She is presidential material. But it became a family issue. Besigye and even Byanyima’s close relatives don’t want to see her return to Uganda’s politics. That’s the challenge we have,” the source observed.

Currently, FDC has already closed the process of picking nomination forms for the 2021 presidential elections.

FDC chairperson Wasswa Biriggwa and Amuriat recently picked the forms from the party headquarters in Najjanankumbi.

They are required to return these forms by August 26.

This literally means that even if some FDC leaders want Byanyima to stand on the FDC ticket for president, the process would not be in her favour.

However, there is another window which can be exploited by Byanyima’s supporters.

For example, if Biriggwa and Amuriat fail to return the nomination forms, the entire nomination process would be reopened for every FDC member including Byanyima.

This would give Byanyima, who has since returned to Geneva after a grueling 3-day hiking trail in France, an opportunity to fly to Uganda to pick the nomination forms from Najjanankumbi.

Ms Byanyima was elected for three terms and served eleven years in the Ugandan Parliament.

A world recognized expert on women’s rights, she founded the still-thriving civil society organization Forum for Women in Democracy (FOWODE). She has served at the African Union Commission and as Director of Gender and Development at the United Nations Development Program.

Ms. Byanyima is a signatory to her country’s 1985 peace agreement and has helped to broker and support women’s participation in peace processes in Rwanda, South Africa, Burundi, Sudan and other countries emerging from conflict.

She co-founded a 60-member Global Gender and Climate Alliance of civil society, bilateral and multilateral organizations and chaired a UN-wide task force on gender aspects of the Millennium Development Goals, and on climate change. She has served on numerous global boards and commissions including the African Capacity Building Foundation and the International Centre for Research on Women.