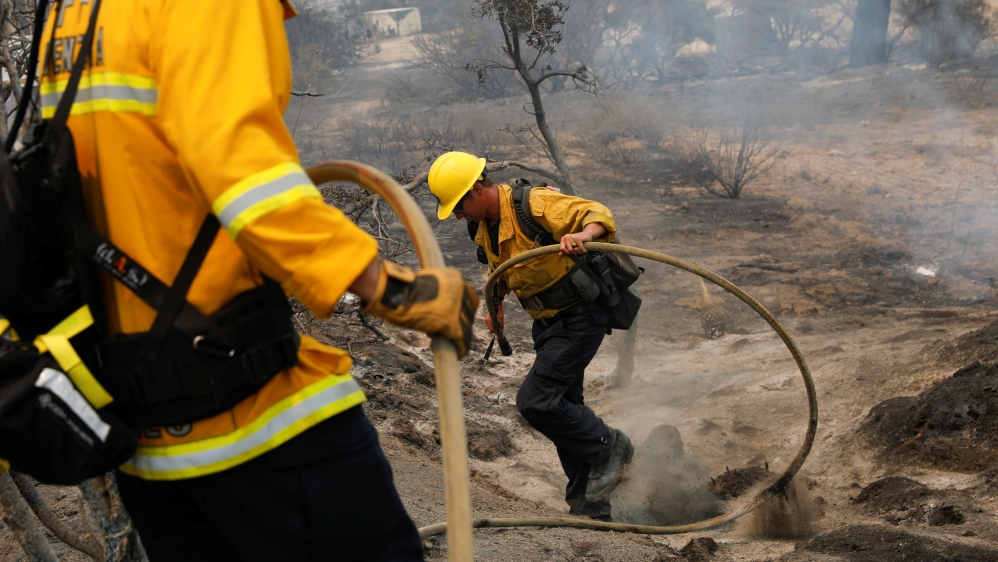 Dozens of lightning-sparked California wildfires grew rapidly on Thursday, forcing tens of thousands of people to evacuate homes in the San Francisco Bay Area in the United States.

California has been hit by its worst lightning storms in nearly two decades, with around 11,000 strikes igniting over 370 fires this week and stretching firefighting resources to the limit, authorities said.

At least nine fires raced through hills and mountains in the North Bay’s wine country about 56km (35 miles) southwest of Sacramento, destroying more than 105 homes and other structures.

Together they have doubled in size to 53,000 hectares (131,000 acres) since Wednesday, forming a “megafire” ten times larger than New York’s Manhattan island across Napa, Yolo, Solano and two other counties.

Collectively known as the LNU Complex Fire, they sent wind-driven flames racing about 36 metres (118 feet) a minute across grassland parched by record-breaking, triple-digit heat, according to the California Department of Forestry and Fire Protection (Cal Fire).

A burning home is seen along Cherry Glen Road during the LNU Lighting Complex Fire on the outskirts of Vacaville, California, [Stephen Lam/Reuters]

“It’s the scariest thing I’ve ever seen, the heat, and it came so fast,” said Fairfield evacuee Stacy Kline.

A Vacaville Pacific Gas & Electric utility worker died on Wednesday while helping first responders, and at least four civilians were injured, according to a Cal Fire spokeswoman.

Another group of 20 fires, called the SCU Lightning Complex, jumped by nearly a third to around 56,656 hectares (140,000 acres) on Thursday some 20 miles east of Palo Alto across four counties, injuring two first responders.

California has warmed one to two degrees Fahrenheit since the beginning of the 20th century, and higher temperatures are blamed for longer and more intense fire seasons that have caused eight of its 10 largest wildfires in the last 15 years.

Governor Gavin Newsom requested 375 fire crews from out of state as resources ran thin, in part as prisoners normally conscripted into firefighting were locked down for COVID-19 or released from prison to slow the spread of the coronavirus.

To the east, in the drought-stricken state of Colorado, the state’s second-largest wildfire in history grew slightly to about 49,283 hectares (121,781 acres), containment ticking up to 14 percent as it burned in remote mountains near Grand Junction, about 306km (190 miles) west of Denver.

Mali: Five factors that made the coup more likely