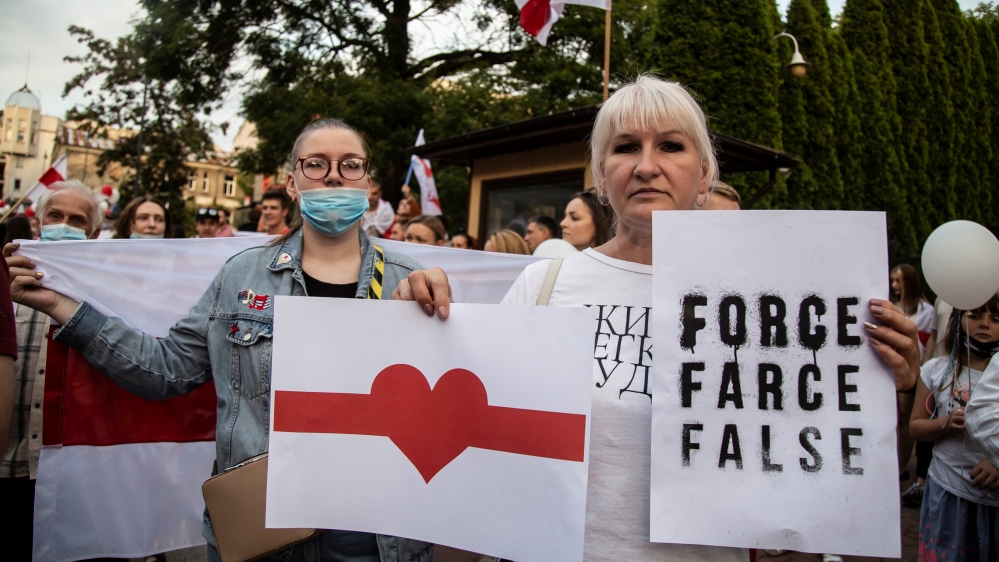 Tikhanovskaya also said she planned to return to Belarus “when I feel safe there”, adding: “It should be clear to the president that there is a need for change.”

Meanwhile, inside Belarus, authorities arrested a leader of striking factory workers on Friday, raising pressure on the opposition.

Belarusian investigators also summoned three leading opposition activists for questioning as part of a criminal probe into the creation of a coordination council intended to facilitate the transition of power.

The move follows Lukashenko’s warning that the opposition leaders could face criminal charges.

The interior minister said Yevgeny Bokhvalov, who organised the strike at the huge Minsk Automobile Plant, was arrested, but gave no further details.

The factory, which makes heavy trucks, has remained on strike since Monday along with many other industrial plants across the country.

The strike has cast a tough challenge to 65-year-old Lukashenko, who had relied on blue-collar workers as his core support base throughout his iron-fisted rule.

In a bid to halt the strike, the Belarusian leader warned the participants would face dismissal and ordered law enforcement agencies to protect factory managers from opposition pressure.

“Most of all, Lukashenko fears the factory workers’ protest, so he tries to scare strike organisers and stop the strikes,” said Sergei Dylevsky, the leader of the strike-organising committee at the Minsk Tractor Plant.

Dylevsky, a member of the opposition’s Coordination Council created earlier this week to facilitate the transition of power, was summoned for interrogation along with two other council members, ex-culture minister and ambassador to France, Pavel Latushko, and lawyer Maxim Znak.

“Even if they arrest us, it will not stop the protests and make Lukashenko look legitimate,” Dylevsky said.

Early on Friday, police deployed to block the streets around the headquarters of the Investigative Committee where the opposition activists were to be questioned.

Several dozen demonstrators rallied nearby to protest the authorities’ actions as the post-election protests entered their 13th straight day.

“Hundreds of KGB operatives came to factories to question and scare the workers,” said 53-year-old engineer Andrei Yelkin who works at the Minsk Automobile Plant. “We are calling for dialogue, but the authorities are responding with threats and new repressions.”

The Belarusian Prosecutor General’s office said the creation of the Coordination Council, which met for the first time on Wednesday, violated the constitution and threatened national security.

The council members have rejected the accusations and insist their actions fully comply with Belarusian law.

Women rally in solidarity with the people of Belarus in Bialystok, Poland [Agnieszka Sadowska/Agencja Gazeta via Reuters]

Mali’s coup is cheered at home but upsets neighbours