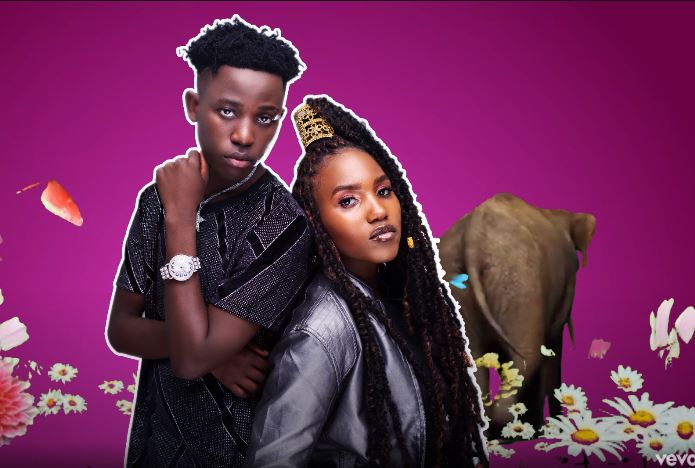 The long-awaited ‘Kyoyina Omanya remix’ visuals are finally on release and guess what, it’s another blast to coup TV airwaves this year.

When singer Crysto Panda announced that he had landed a collabo with songstress, Sheebah Karungi for his Kyoyina Omanya song remix everyone was surprised by how true this was until he dropped the audio.

Kyoyina Omanya
remix audio surpassed normal listenership and downloads on most digital platforms
to an extent of trending in the number one position on Twitter.

This sent the fans bananas as they desperately demanded Panda that he seals the mega project with a video, a requested he consented to.

Two weeks back, Panda alerted his fans that he had shot the video in a Busabala Warehouse and he was to drop it soon. Yesterday, all focus was on his socials with fans waiting for the video after he hinted that the release time was 10PM.

Panda dropped the audio and is currently receiving impressive attention.

As she is often known for being unique when it comes to fashion, Sheebah Karungi’s attire in this video doesn’t disappoint and is a perfect fit for her sexy body.

The song is a club banger and the self-proclaimed ‘Queen Karma’ pulled-off the right vibe with fascinating dancehall strokes have left fans amazed.

Panda’s dress code is that trendy and simple for him to make showcase of his famous, hoppy dance move dubbed ‘Bina dance’ in company of other professional choreography groups.

The video is a simple
neat flick from fabled videographer, Aaronaire on set.

It should also be noted that the two preferred to have talented music producer, Artin (Axtra Nation) exclusively retain the production of the remix like it is for the original version.

Its no doubt that Panda who also doubles as a TV presenter, is making remarkable statements in the music business.