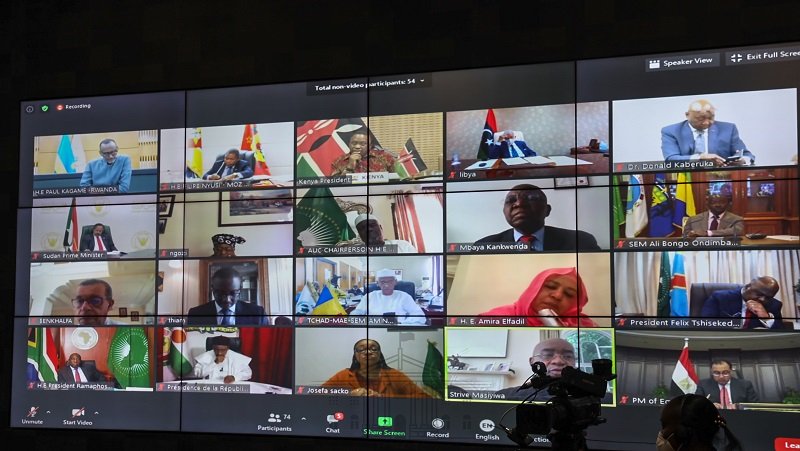 African Heads of State have strongly condemned the Tuesday military coup in Mali during which President Ibrahim Boubacar Keita was seized by mutinying soldiers.

Led by the African Union Chairperson Cyril Ramaphosa, the leaders called for the immediate release of President Keïta and senior members of his administration among them the country’s Prime Minister Boubou Cissé.

President Uhuru Kenyatta urged for a “speedy, peaceful and democratic” resolution of the crisis while President Ramaphosa called for dialogue to restore peace and stability in the West African country.

President Felix Tshisekedi of the Democratic Republic of Congo (DRC) rallied African countries to take a firm position on the matter saying the coup was “dangerous for democracy in Africa”.

The Heads of State spoke Thursday evening during a virtual meeting of the African Union Bureau convened to discuss the continental response to the Covid-19 pandemic.

The meeting was also attended by representatives of Regional Economic Communities (RECs), African special envoys on Covid-19 and the Director of Africa CDC Dr John Nkengasong.

In his report, Dr Nkengasong informed the leaders that despite crossing the 1 million mark of Covid-19 infections, Africa had in the last two weeks witnessed a reduction of 37 percent reduction in reported daily infections.

Dr Nkengasong said seven Covid-19 vaccine trials were nearing World Health Organization (WHO) approval. Four African countries among them Kenya are participating in the clinical trials for these vaccines.

He said Africa targets to vaccinate 60 percent of her population at an estimated cost of 10 to 15 billion USD once the Covid-19 vaccine becomes available.

In their report presented by Rwandan economist Donald Kaberuka and Zimbabwean businessman Strive Masiyiwa, the envoys applauded the IMF for being the most responsive bilateral institution to Africa’s Coronavirus response.

Mr Kaberuka said the lender had injected a total of USD 23.5 billion into African economies in the last four months, followed by the World Bank (14.3 billion USD) and African Development Bank (700 million USD).

The former president of the African Development Bank said Covid-19 risks wiping out a decade of Africa’s economic progress and warned that the next three to four years will be particularly tough for the continent.

Mr Masiyiwa said a total of 51 countries had subscribed to the Africa Medical Supplies Platform. Among these nations are six Caribbean countries led by Barbados.

The platform, he said, has attracted 800 suppliers including eleven African manufacturers offering 600 products, including all key Covid-19 medicines recommended by WHO.

In his address, President Kenyatta said Africa needs to elevate its global partnerships in the search for a Covid-19 vaccine so as to “ensure that African countries are not further marginalised but are positioned to be among first line of beneficiaries, once a breakthrough is made”.

He commended the special envoys for their efforts in helping the continent deal with the health and socioeconomic impacts of Covid-19.

“The economic challenges we face require concerted multilateral effort, such as prioritising debt cancellation and Bretton Woods led relief package, that do not exacerbate emerging local challenges,” he said.

President Paul Kagame (Rwanda) and President Filipe Nyusi (Mozambique) speaking on behalf of the East African Community (EAC) and the Southern African Development Community (SADC) emphasized on the need to ensure that Africa is not left behind in the roll out of the Covid-19 vaccine when ready.

Related Topics:africanewse.a live news
Up Next