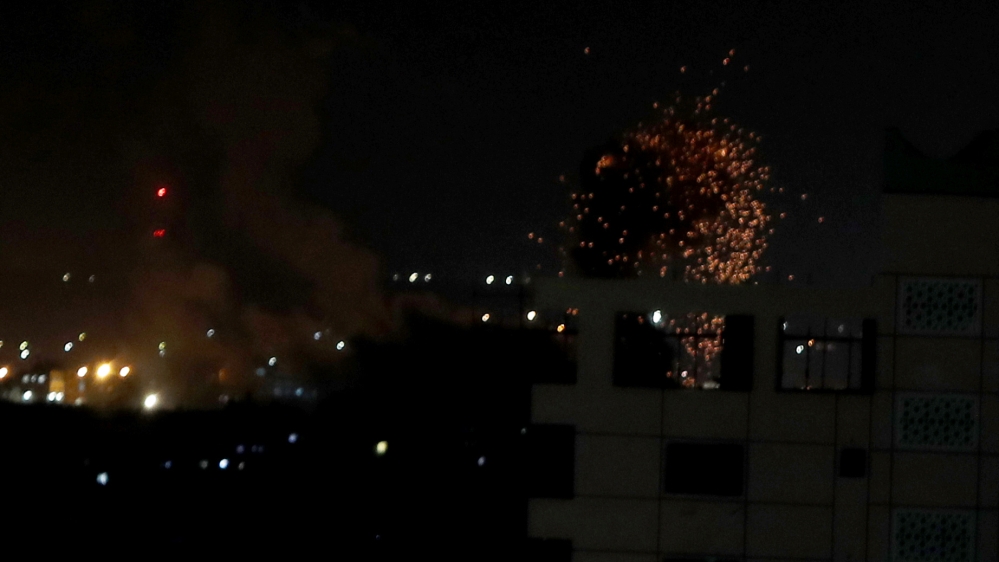 Israeli tanks shelled Hamas positions in the Gaza Strip overnight in what the Israeli army said was a response to continuing waves of incendiary balloons sent across the security fence to nearby Israeli towns and settlements.

The continuing violence – which has stretched into nine consecutive nights – came despite attempts by Egyptian security officials to end the flare-up, which has seen two weeks of rocket and fire-balloon attacks from Gaza and nightly Israeli raids.

Local media reported on Thursday that Qatar is also mediating between Israel and Hamas – the group that rules the Gaza Strip – to restore calm and that the coming 48 hours would be crucial.

Gaza security officials said the Israeli attacks hit Hamas observation posts near al-Maghazi and al-Bureij refugee camps in the centre of the strip, and the town of Khan Younis, further south.

There were no casualties, they said.

An Israeli military statement said “arson balloons were launched from the Gaza Strip into Israel”.

“In response … tanks targeted military posts belonging to the Hamas terror organisation in the Gaza Strip,” it said.

As part of punitive measures over the incendiary balloons, Israel has banned fishing off Gaza’s coast and closed the Karam Abu Salem (Kerem Shalom) goods crossing, cutting off deliveries of fuel to the territory’s sole power plant.

Power had been in short supply even before the shutdown, with consumers having access to electricity for only about eight hours a day.

That will now be cut to just four hours a day using power supplied from the Israeli grid.

The Gaza Strip has a population of two million, more than half of whom live in poverty, according to the World Bank. The Palestinian territory has been under a devastating Israeli blockade since 2007.

Israel and Hamas have fought three wars since 2008.

On Wednesday, the chairman of the Gaza Neonatal Network (GNN) warned that frequent electricity outages threaten the lives of more than 100 newborn babies currently being in intensive care incubators in Gaza hospitals.

Nabil al-Baraqoun said the 135 neonatal incubators are all powered by electricity, noting power cuts and the use of alternative energy sources cause damage to medical devices such as incubators, resuscitation equipment and ventilators, which could cause complications for the infants – and even deaths.

Qatar pledged to send $15m to Gaza monthly as part of an informal agreement between Israel and Hamas.

Under that deal, Israel allowed the grants to go through its territory in exchange for an end to the weekly “March of Return” protests held by Palestinians east of the fence separating Israel from Gaza.

Most of the funds were to have been used to pay the salaries of Hamas civil servants but about $5m monthly was for impoverished Palestinians in Gaza.