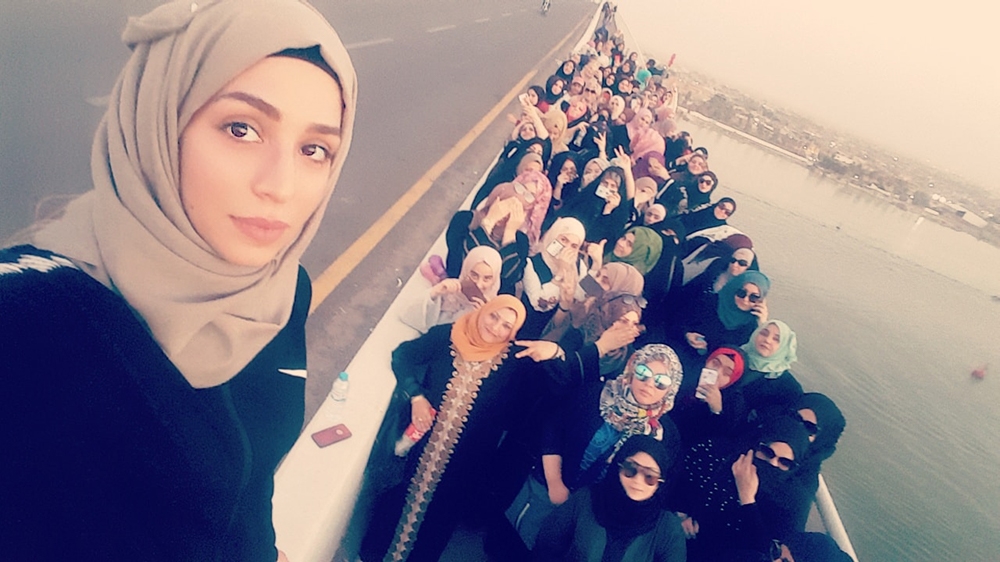 A female activist has been killed in the southern Iraqi city of Basra by unidentified gunmen who opened fire on the car she was in.

Reham Yacoub, a doctor and activist in the local protest movement since 2018, was shot by an assault rifle-brandishing gunman on the back of a motorcycle on Wednesday. Three women in the car at the time were wounded, with died one later.

Known for organising women’s marches, Yacoub had previously received threats against her life when she participated in training courses supervised by the US consulate in Basra in 2017 and 2018.

Yacoub’s killing marks the third incident this week in which gunmen targeted anti-government political activists after one was killed and a separate attack saw assailants open fire on a car carrying at least two others.

Translation: Activist Reham Yacoub has joined the caravan of martyrs

“The continuing policy of impunity in Iraq encouraged the escalation of systematic assassinations outside the law, the most recent of which was the assassination of the prominent protest activist Reham Yacoub on Wednesday,” the Geneva-based monitor said in a statement.

Iraq has witnessed a series of assassinations and forced disappearances of journalists and political activists, as well as the killing of hundreds of protesters since October 2019, the start of demonstrations in against corruption, political and security deterioration, and the economic crisis.

The most recent wave of violence began when activist Tahseen Osama was killed inside the headquarters of a local internet company last Friday, following the escalating protest movement in the province and demands for basic services.

Translation: Who’s next? Reham Yacoub, an activist and doctor has been murdered in cold blood in Basra, joining the list of Iraq’s young martyrs who are being killed by the worst of God’s creation.

Osama’s killing prompted the return of street demonstrations for three days, during which security forces opened live fire on protesters, who threw rocks and petrol bombs at the governor’s house and blocked several main roads.

Prime Minister Mustafa al-Kadhimi subsequently sacked the Basra police and national security chiefs on Monday and ordered an investigation into the violence.

On the same day, two activists – Ludia Raymond and Abbas Subhi – were attacked by gunmen in Basra, which resulted in severe injuries.

Last month, unknown gunmen assassinated a well-known security analyst, Hisham al-Hashemi, in the centre of the capital Baghdad following a press interview in which he criticised the behaviour of one of the armed factions in Iraq.

The Euro-Med Monitor said one main factor in the recent extrajudicial killings of activists and media professionals is the local authorities’ neglect of conducting serious investigations to find the perpetrators and taking adequate measures to ensure accountability and justice.

“The perpetrators’ awareness of their impunity in assassination crimes will only lead them to commit more of them in the future, which requires the Iraqi authorities to take serious and practical action to not tolerate this kind of crimes against individuals,” it said.