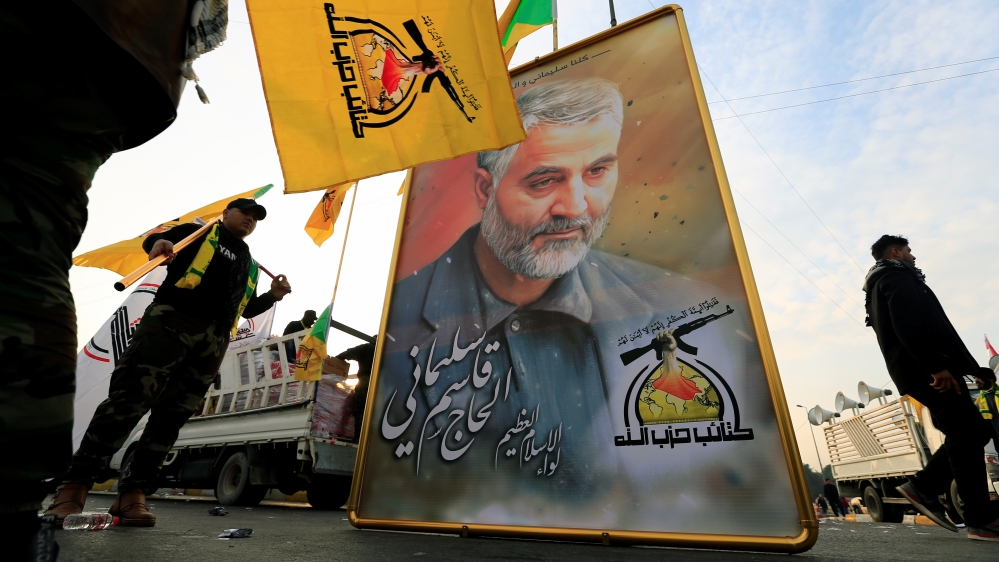 Iran displayed locally made ballistic and cruise missiles – a move certain to anger the United States as it prepares to demand that all UN sanctions be reimposed on the country.

State-run TV said officials unveiled the two new missiles on Thursday – National Defence Industry Day in Iran. They are named after top Iranian General Qassem Soleimani and Iraqi militia leader Abu Mahdi al-Muhandis, who were killed outside Baghdad’s international airport in a US strike in January.

Defence Minister Amir Hatami said the ballistic missile had a range of 1,400km (600 miles) and the new cruise missile had 1,000km (400 miles), ignoring US demands that Tehran halt its missile programme.

Images of the missiles were shown on state-run TV, which it said was “the newest Iranian cruise missile that will further strengthen Iran’s deterrence power”.

“Missiles and particularly cruise missiles are very important for us… The fact that we have increased the range from 300km to 1,000km in less than two years is a great achievement,” said Iranian President Hassan Rouhani. “Our military might and missile programmes are defensive.”

Iran routinely unveils technological achievements for its armed forces, its space programme, and its nuclear efforts.

The announcement comes as Washington is pushing to extend a UN-imposed arms embargo against Iran, which is due to expire in October under Tehran’s 2015 nuclear deal with world powers.

Tensions have been high between Tehran and Washington since 2018, when President Donald Trump pulled the US out of the deal and reimposed crippling sanctions on Iran.

Washington says its aim is to force Tehran to agree to a broader deal that puts stricter limits on its nuclear work, curbs its ballistic missile programme and ends its regional proxy wars. Iran has rejected talks as long as US sanctions remain in place.

US Secretary of State Mike Pompeo said on Wednesday Trump has directed him to trigger a “snapback” – a return of all sanctions on Iran – at the UN Security Council in New York on Thursday, after the council rejected Washington’s bid to extend Tehran’s arms embargo.

Pompeo warned Russia and China not to disregard the reimposition of all UN sanctions on Iran.

Pompeo will meet with Indonesia’s UN Ambassador Dian Triansyah Djani – council president for August – to submit a complaint about Iran’s non-compliance with a 2015 nuclear deal, even though Washington quit the accord in 2018.

The nuclear deal between Iran, Russia, China, Germany, Britain, France and the US aimed to prevent Tehran from developing nuclear weapons in return for sanctions relief. That accord is enshrined in a 2015 Security Council resolution.

Russia, China and other countries are likely to simply ignore it and not reimpose the sanctions on Iran.

When asked if the US would target Russia and China with sanctions if they refuse to reimpose the UN measures on Iran, Pompeo told Fox News on Wednesday: “Absolutely.”

“We have already done that where we have seen any country violate … the current American sanctions, we’ve held every nation accountable for that. We’ll do the same thing with respect to the broader UN Security Council sanctions as well,” he said.

Russia described statements by the US on reimposing UN sanctions against Iran as “absurd”, adding Washington has no legal or political grounds to do so, the RIA news agency cited Deputy Foreign Minister Sergei Ryabkov as saying on Thursday.

Ryabkov added that such a step would result in crisis at the UN Security Council, the Interfax news agency cited him as saying.

Diplomats say the so-called sanctions snapback process will be messy as Russia, China and other countries question the legality of the US move given that Washington itself is no longer complying with what Trump called the “worst deal ever”.

Pompeo said it was unfortunate that European members of the council abstained on the US attempt to extend the arms embargo and the move “makes the European people less safe”.

“They just are wedded to this crazy nuclear deal, they’re trying to hang on to it,” he said.

Once Pompeo submits the complaint about Iran to the Security Council, the body has 30 days to adopt a resolution to extend sanctions relief for Tehran, or else the measures will automatically snap back. Any attempt to extend the sanctions relief would be vetoed by the US.

In response to what the US calls its “maximum pressure” campaign of unilateral sanctions – a bid to get Iran to negotiate a new deal – Tehran has breached central limits of the 2015 pact, including on its stock of enriched uranium.