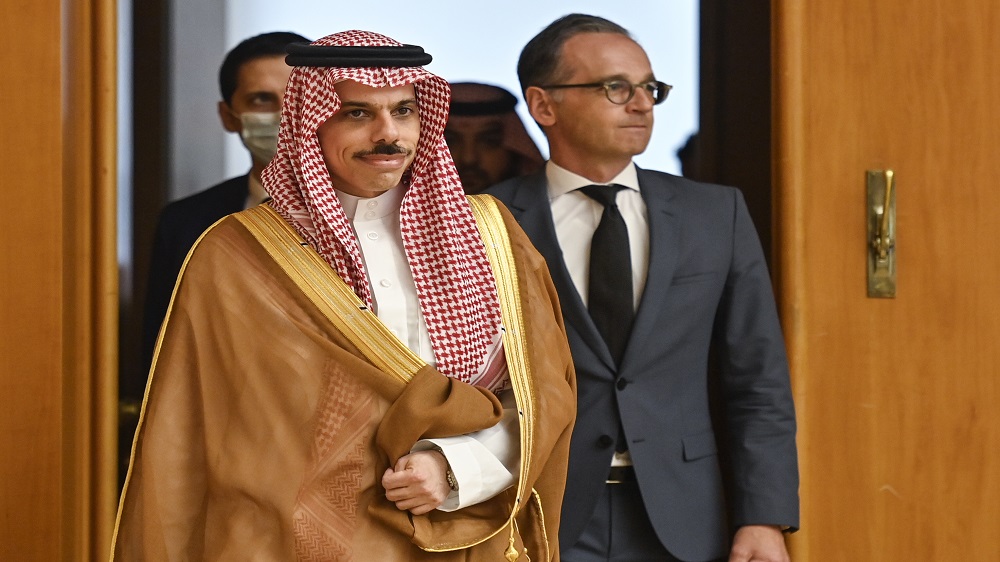 Saudi Arabia says it will not follow the United Arab Emirates in establishing diplomatic ties with Israel until it has signed an internationally-recognised peace accord with the Palestinians.

The UAE last week became the first Gulf state to normalise relations with Israel, in a US-brokered accord that raised the prospect of similar deals with other Arab states – including Saudi Arabia.

But after days of conspicuous silence and in the face of US pressure to announce a similar deal, Saudi Arabia’s Foreign Minister Prince Faisal bin Farhan ruled out the possibility until the Palestinian issue is resolved.

“Peace must be achieved with the Palestinians” on the basis of international agreements as a pre-condition for any normalisation of relations, Prince Faisal told reporters during a visit to Berlin on Wednesday.

“Once that is achieved all things are possible,” he added, in a comment that was consistent with Saudi Arabia’s previous stance on the issue.

US President Donald Trump said he expected Saudi Arabia to join the agreement announced last week by Israel and the UAE to normalise diplomatic ties and forge a broad new relationship.

“I do,” Trump replied on Wednesday when asked at a White House news conference if he expected Saudi Arabia to join.

Under the accord, which Trump helped broker, Israel agreed to suspend its planned annexation of areas of the occupied West Bank. The agreement also firms up opposition to regional power Iran, which the UAE, Israel and the US view as the main threat in the Middle East.

Prince Faisal said the kingdom remained committed to peace with Israel on the basis of a 2002 Arab Peace Initiative.

He reiterated criticism of Israel’s “unilateral policies” of annexation and building settlements in the occupied West Bank as “illegitimate” and “detrimental” to a two-state solution. But he also voiced cautious optimism over last week’s deal.

“Any efforts that result in holding back the threat of annexation could be viewed as positive,” he said.

Saudi Arabia, which does not recognise Israel, drew up the 2002 initiative by which Arab nations offered to normalise ties with Israel in return for a statehood deal with the Palestinians and full Israeli withdrawal from territory captured in 1967.

Earlier in the news conference, Trump called the UAE-Israel accord a good agreement and said: “Countries that you wouldn’t even believe that want to come into that deal.” He did not name any other countries besides Saudi Arabia.

Trump also said the UAE was interested in buying F-35 fighter jets made by Lockheed Martin Corp, which Israel has used in combat.

“They have the money and they would like to order quite a few F-35s,” Trump said, adding the prospective sale was “under review”.

Israeli Prime Minister Benjamin Netanyahu, citing a need to maintain Israeli military superiority in the region, said on Tuesday his country would oppose any US F-35 sales to the UAE.

A sale, which could reduce Israel’s military advantage in the Middle East, would come after Israel and the UAE said last week they would normalise diplomatic ties.

Any F-35 sale could take years to negotiate and deliver, giving a new US presidential administration ample time to halt the deal. Any sale would also need congressional approval.

An industry source told the Reuters news agency the prospective fighter jet sale was arranged with the help of Trump’s senior adviser and son-in-law Jared Kushner.

The US guarantees that Israel receives more advanced American weapons than Arab states, giving it what is labelled a “Qualitative Military Edge” over its neighbours.

Kushner has insisted it would be in Riyadh’s interest to also formally establish ties with Israel.

Further putting the kingdom in the spotlight, Netanyahu on Monday said Israel was working on opening a corridor over Saudi Arabia for flights to the UAE.

Not only would a formal recognition of Israel be seen by Palestinians and their supporters as a betrayal of their cause, it would also hurt the kingdom’s image as the leader of the Islamic world.

“The notion that Saudi Arabia will be next to normalise relations with Israel was far-fetched,” said Aziz Alghashian, a lecturer at Essex University specialising in the kingdom’s policy towards Israel.

“The biggest constraint for Saudi-Israeli normalisation is not the fear of a domestic and regional backlash. Rather, Saudi Arabia deems it necessary to not normalise relations outside the framework of the Arab Peace Initiative that called for resolving the Palestinian issue, if it still wants to be seen as the leader of the Muslim and Arab world,” said Alghashian.

Analysts Back Besigye’s Move to Opt Out Of 2021 Election

Too many goodbyes: The pain and hope of loving an addict | Health