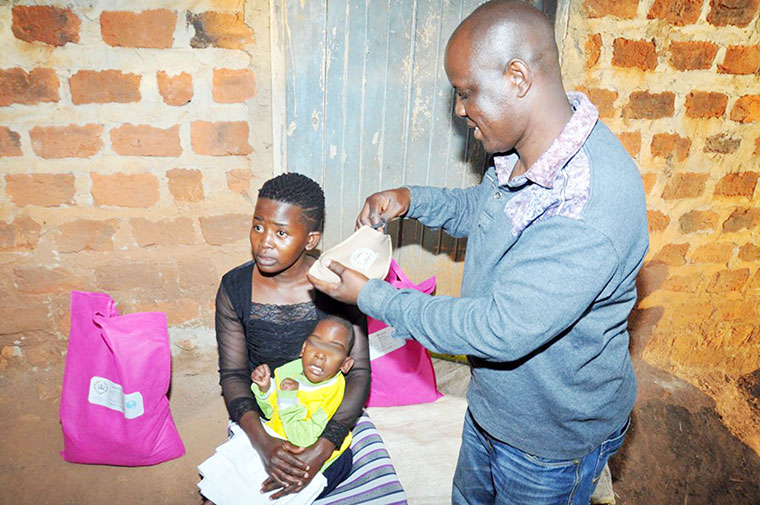 For James Ssenkandwa, the lack of adequate knowledge about cerebral palsy and how to handle people with the condition has caused untold psychological stress to families with people suffering from it.

Over the past months, the situation has been compounded by the Covid-19 restrictions, something that prompted him to create a response programme for people living with cerebral palsy and autism in Kampala, Wakiso and Mukono districts, writes Sadab Kitatta Kaaya.

What drives a mother to view death as the only reprieve for her child, one she is willing to even personally deliver? Nothing, most mothers will vehemently argue; but for one mother, cerebral palsy pushed her to that edge that she is not proud of. Lack of information, inadequate medical care and social stigmatization, all compound the challenges parents of children born with cerebral palsy face.

Anna Maria (not real name) received the blunt force of them eight years ago when she was tempted to take her son’s life, thinking that would end his misery.

Anna Maria’s son was born with a yellowish skin. At three days, he got a fever that kept them at Mulago hospital for about three months before they were discharged to return home at Lugoba-Kazinga in Kampala’s Kawempe division.

The days that followed presented the worst experience for any mother – more so, a low-income one. Without enough provision, she lost all hope and the best she could think of at the time, was to end her son’s life by giving him an overdose of drugs.

She, however, could not withstand the agony of seeing her son die at her hands and thank goodness, she immediately made him to vomit the drugs she had just administered to him.

Eventually, through her numerous visits to Mulago hospital, she learnt that her son has ‘CP’ – cerebral palsy, a neuro-developmental condition comprising a group of permanent disorders of movement and posture that are attributed to non-progressive disturbances of the developing foetal or infant brain.

This was just one of the many testaments Ssenkandwa, the director of Cerebral Palsy and Autism Renaissance Organization (CPARO), found during documentation of cerebral palsy cases in Kawempe suburb last week.

With funding from the Queen’s Commonwealth Trust (QCT), Ssenkandwa’s organization has been implementing a Covid-19 response programme for people living with cerebral palsy and autism in Kampala, Wakiso and Mukono districts.

According to the Centres for Disease and Prevention Control (CDC), a US government agency, symptoms of CP vary from person to person. A person with severe CP might need to use special equipment to be able to walk, or might not be able to walk at all, and might need lifelong care. On the other hand, a person with mild cerebral palsy could walk a little awkwardly, but not need any special support.

Angelina Kakooza-Mwesige, Hans Forssberg, Ann-Christin Eliasson and James Tumwine in their April 2015 research paper titled: Cerebral palsy in children in Kampala, Uganda: clinical subtypes, motor function and co-morbidities, note: “Despite lack of reliable information on the prevalence of CP in Uganda, there is reason to believe that this condition is significant in view that for every 1,000 live births in Uganda, approximately five children do not live to their first birthday and four women die during pregnancy and its related complications.”

The CDC notes that besides having problems with movement and posture, many of the people with CP suffer from conditions such as intellectual disability; seizures; problems with vision, hearing, or speech; changes in the spine (such as scoliosis); or joint problems (such as contractures).

CP has been classified in four types, according to the main types of movement disorder. First is spastic cerebral palsy which affects about 80 per cent of people with CP. People with this condition have stiff muscles, especially in the legs, which results into awkward movements.

The second type is dyskinetic cerebral palsy. People with this condition have problems controlling the movement of their hands, arms, feet and legs, finding it difficult to sit and walk. The movements are uncontrollable and can be slow and writhing or rapid and jerky. Sometimes the face and tongue are affected and the person has a hard time sucking, swallowing and talking.

This is the condition that Mariam Nabukenya’s nine-year-old son suffers from.

“To sleep, I have to give him a sleeping pill, and feeding him is a hustle,” said the resident of Lugoba-Kazinga, Kawempe.

The third type is ataxic cerebral palsy, which causes loss of balance and coordination. People with this condition are unsteady when they walk, and tend to have a hard time with making quick movements.

Some people have symptoms of more than one type of CP – a condition termed as mixed cerebral palsy. The most common type of mixed CP is spastic-dyskinetic CP.

People with cerebral palsy are among the most marginalized persons with disabilities in Uganda since the condition is not largely recognized by national policies and statistics as a major category of disability.

Much as the seven-year-old daughter of Oliver Mugalu, another resident of Lugoba-Kazinga, does not have any speech impairments, she has failed to find a school in her neighbourhood that can enrol her.

“I wanted to take her to school but the schools around declined to enroll her because of her condition yet she doesn’t have speech impairment,” Mugalu said.

It gets worse when children with CP want to play with other children. “They don’t freely associate with children with CP because society has taught them [the regular children] to look at those with CP as outcasts,” says Nabukenya.

This has taught parents to keep their children indoors, said Zulaika Nansubuga, a mother to an eight-year-old son suffering from CP.

“The stigma is too much and it has made some parents to look at their children as a problem,” said Nansubuga, who also blames this to lack of information about the condition. Worryingly, Lugoba-Kazinga area had more than 10 children with cerebral palsy.

Ssenkandwa says that the lack of adequate knowledge about CP and how to handle people with the condition has caused untold psychological stress to families with people suffering from CP.

“Having adequate knowledge would help them to cope with the demands of taking care of children and adults with cerebral palsy as well as ensure that their rights are not violated,” Ssenkandwa said.

“Most people with CP and autism don’t have access to medical care and other social amenities. Most drugs are expensive and unavailable at most health units, especially in rural areas which affects their social, psychological and physical wellbeing,” Ssenkandwa said.

It does not stop at medical care, said Eva Nakimera, a mother of three, “It is also too expensive to feed children with CP as they require a special diet given their compromised immunity.”